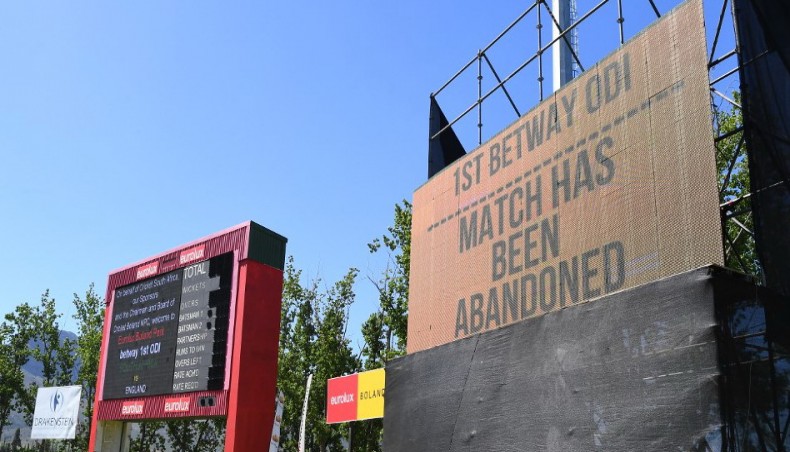 A general view of a screen announcing that the first one-day international match between South Africa and England has been abandoned at Boland Park stadium in Paarl on Saturday. — AFP photo

England's cricket tour of South Africa has been called off after a COVID-19 outbreak in the England touring party, both countries said on Monday.

The joint announcement from the two boards, which alluded to the ‘mental and physical health’ of the players, came after the rearranged first match in the three-match series on Sunday was cancelled after two members of the England touring party tested positive for the virus.

England will return home having played all three matches in the T20 series but none of three scheduled one-day internationals.

‘Cricket South Africa and the England and Wales Cricket Board have agreed to postpone the remaining matches in the current One-Day International Series,’ a joint statement said.

‘The decision was taken jointly by the two Boards to ensure the mental and physical health and welfare of players from both teams.’

Many of the England players spent long stretches during the summer in a bio-secure bubble and some were also confined during the Indian Premier League in the Emirates which followed.

Two of the younger members of the squad, Tom Banton and Tom Curran have pulled out of contracts in Australia's Big Bash League in the last week, citing the pressure of living in the bio-secure bubbles.

‘The concern over the mental health impact of recent events on all involved is not one that we as CSA or the ECB take lightly and the decision to postpone the tour is the most responsible and reasonable course of action for us,’ said CSA acting CEO, Kugandrie Govender.

The two governing bodies will examine whether the series can be played at some point in the future, the statement added.

‘I would like to thank the ECB for the continued positive relations, and we look forward to hosting the England team in the near future,’ said Govender.

The decision to call off the tour followed apparent breaches of the bio-secure environment at the hotel in Cape Town where both teams are staying.

A South African player tested positive for COVID-19 on Friday. Two hotel staff members then tested positive before two members of the England touring party returned what were described as ‘unconfirmed positive tests’ on Sunday.

The series was to have started in Cape Town on Friday but that match was cancelled an hour before the players were to take to the field after the South African player's positive test.

That opener was re-scheduled and moved to Paarl on Sunday, but that match was cancelled following the positive results in the England camp.

The teams played three Twenty20 internationals without any problems before the COVID-19 outbreak.

England are due to return home on a chartered flight on Thursday. It was not clear whether any of the touring party might have to remain in quarantine in South Africa because of their exposure to the virus.

South Africa are due to host Sri Lanka for two Test matches, starting in Centurion on December 26, while Australia are due to visit for a Test series early in the new year.

Both countries are likely to want strong assurances about the level of bio-security during their tours.

The cancellation of the tour marks a major blow for world cricket as it attempts to carry on in the face of the coronavirus pandemic.

No coronavirus cases were recorded as they created bubbles at two grounds with hotel facilities -- Old Trafford in Manchester and the Rose Bowl in Southampton -- where all of the matches were played.

India are currently touring Australia while West Indies and Pakistan are in New Zealand.

England are due to tour Sri Lanka and India in the new year.