Many BRTC buses go out of order in few years 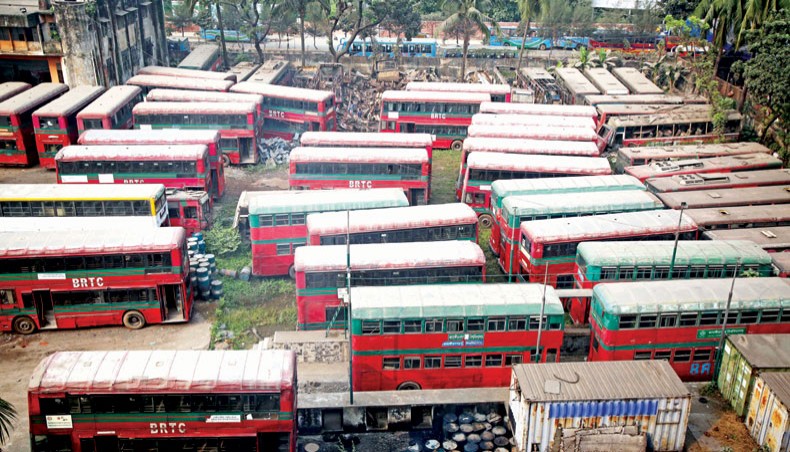 A BRTC bus depot at Mirpur-12 in Dhaka is occupied mostly by dilapidated buses. The photo was taken on Sunday. — Sony Ramany

Many buses of the Bangladesh Road Transport Corporation become inoperative after few years in service resulting in a huge wastage of public money.

Transport experts alleged that the corporation was more interested in procuring more buses instead of maintaining the existing ones as some of the government officials were the beneficiaries of the procurement process.

They also blamed the absence of accountability and monitoring for the unserviceable condition of buses under the BRTC.

Officers responsible for such wastage should also be brought to justice in due process, they added.

‘We have a lack of capacity to monitor our maintenance section properly and some of my staff members are also guilty of having been involved in irregularities,’ BRTC chairman Md Ehsan-E-Elahi told New Age.

He mentioned that some of the drivers and depot managers received punishment for not maintaining the buses properly and stealing spare parts and fuel.

At present, the corporation has total 1,876 buses in its fleet, out of which 1,356 are in a serviceable condition, 250 are undergoing heavy repair and 270 are beyond economic repairs, according to data.

BRTC data show that between 1999-2000 and 2019-2020 fiscals it purchased total 2,214 buses from Pragati Industries Ltd and different companies from India, Sweden, South Korea and China at an approximate cost of Tk 1,300 crore.

An operation department officer of the corporation explained that when a bus is termed as out of the fleet it means that that bus was sold as scraps or dumped.

Road transport expert and Bangladesh University of Engineering and Technology civil engineering professor Shamsul Hoque told New Age on Friday that the corporation purchased buses from time to time by taking advantages from the government.

He explained that all these buses were purchased with public money under soft loans while private companies do not get subsidies like these.

‘Even after getting such facilities, the BRTC could not fulfil the public expectation,’ he said, adding, ‘I’ll say that it is a complete wastage of public money.’

Shamsul mentioned that these buses have life expectancy of around 15 years while under the BRTC’s services these became unserviceable within few years.

‘If private companies owned these buses, they would have run these vehicles for many more years as they do business with care,’ he said.

He blamed the lack of accountability, monitoring and procurement-centric interest among some government officials for this situation.

‘Some of the government officials are the beneficiaries of the procurements made and they will not want to change the present trend,’ he added.

‘It’s procurements in general and buses in particular cannot be treated as a source of illicit enrichment by a section of relevant officials of the BRTC or even relevant ministry,’ he said.

All allegations of irregularities in procurement of buses should be duly investigated to ensure justice, he said.

The easiest way for relevant authorities, especially the ACC is to take account of income and wealth of relevant officials, he said.

‘It is also disappointing that such large numbers of  buses are lying out of order or are under major repair which shows lack of proper monitoring and internal control causing huge waste of public money,’ he said.

Officers responsible for such wastage, which can be at least partially by design, should also be brought to justice in the due process, he added.

Out of these 338 are completely out of the fleet while 1,283 are in service, 388 under heavy repair and 167 are beyond economic repairs.

The corporation in 2011-12 fiscals purchased 290 Ashok Leyland double-decker buses from India while 240 of these are in service now, 34 under heavy repair, five beyond economic repair and 11 are completely out of service.

As for the 150 Daiyu CNG AC buses, bought at the same time having the same life expectancy, of which 93 are now in service, 44 under heavy repair, four termed as BER and nine are completely out of order.

In 2019-2020 fiscal the corporation purchased 100 Tata non-AC buses from India with a life expectancy of 12 years while 83 of these are now in service, one under heavy repair and 16 are completely out of service.

The corporation bought 50 Volvo double-decker buses from Sweden, which went out of order within six to seven years after hitting the road mainly due to poor maintenance, though their economic life was 15 years.

Currently, only one of these buses is operational and 49 are completely out of service.

Out of these 92 are now in service, 27 in long lease, 179 under heavy repair, 16 in beyond economic repair and 78 are completely out of the fleet.

In 1999-2000 fiscals BRTC purchased 163 Ashok Leyland double-decker buses from India while only 12 of these are in service now, six under heavy repair, 30 termed as BER and 78 are completely out of service.

BRTC chairman Md Ehsan-E-Elahi on Thursday told New Age that it was true that they could not monitor the maintenance section properly.

‘I don’t have enough manpower to monitor the maintenance section. I have weakness there,’ he said, adding, ‘so to increase monitoring we are recruiting manpower.’

He said that they would go for full automation and digitalisation of BRTC to prevent these wrongdoings.

They were also motivating drivers and depot managers to carry out proper repair work and use the right spare parts, he continued.

In service (Including those in dilapidated condition)  1,283