Expatriate workers: the unsung knights of our economy 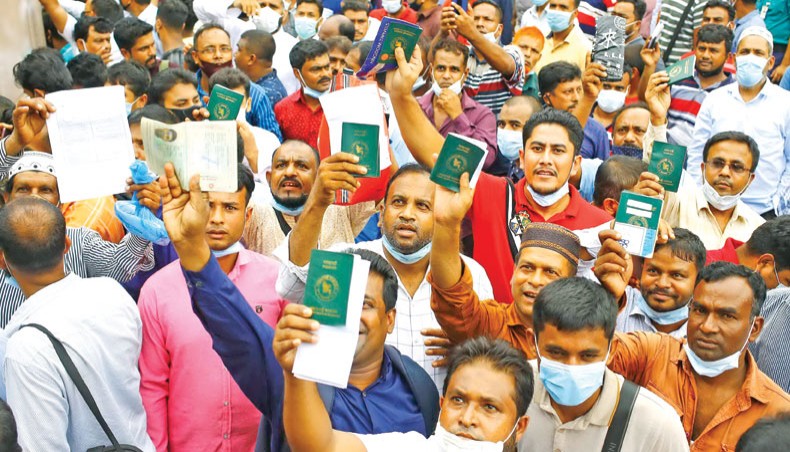 Migrant workers crowd in front of the Saudia airline office at Karwan Bazar in Dhaka for confirming their tickets on September 22 as the airline officials struggle to cope with the rush of passengers willing to join their work in the Kingdom of Saudi Arabia. — Sourav Lasker

During the COVID-19 most of the financial sectors are hit hard but incoming remittance has broken previous records. Corruption, unnecessary mega projects and widespread irregularities are obstacles on the path of utilising the hard-earned money of the migrant workers. Moreover, the migrant workers suffer horrific treatments, sexual violence and even death at their destination countries and the Bangladeshi authorities have brushed off their responsibilities to ensure justice. The justice to the sweat of the remittance warriors is always denied, writes MD Talebur Islam Rupom

FOREIGN remittance is the second-largest economic contributor to the national GDP of Bangladesh. Yet expatriate workers are treated inappropriately both by their native and employed countries.

The workers of this paramount sector suffer terrifically and are constantly deprived of their appropriate treatment. There are several reasons for what most of the people choose to go abroad by risking their lives, comfort and leaving family members. Unemployment and lack of economic safety with other basic needs are two of the major issues that enforce directly and indirectly people to leave their motherland.

Currently, Bangladesh has about eight million migrant workers, mostly in the countries located in the Arabian Peninsula, which remit about USD 15 billion per annum on average and make indispensable contributions to the economy.

Catastrophically, Saudi Arabia was the highest remittance sending country in the 2019-2020 fiscal year but the highest number of rapes, domestic violence cases and deaths victimising the workers are registered in Saudi Arabia so far. It is also similar to other Gulf nations. Nevertheless, every expatriate worker has the reasons that forced them to leave their native country to economically support themselves and their family.

Whilst the world is facing an economic recession, Bangladesh is still enjoying the GDP growth, thanks to the expatriate workers. In October this year, more than USD 2.11 billion was sent to the country as a remittance. In November this number dropped to around USD 2.08 billion.

Foreign remittance is breaking previous records. In the first five months of 2020-21 fiscal year (July-November), remittance went up by 41.32 per cent. Another record is that this month the total remittance has crossed USD 10 billion. In these five months, the remittance arriving in the country totalled around USD 10.90 billion. In October, a World Bank report said that remittance would decrease globally due to the economic impacts of the COVID-19 outbreak, but it would increase in Bangladesh.

In the current fiscal year, around USD 20 billion may come in remittance despite the catastrophe of the COVID-19. Bangladesh will rank 8th in receiving remittance. According to the estimates of the Asian Development Bank, the flow of remittances to South Asian countries is likely to fall by 26 per cent whereas Bangladesh is leading the board.

Bangladesh is one of the fastest-growing economies but lacks in its strategies to utilise the resources and treat the resource-people properly. On the other side of the coin, it is alarming too. Bangladeshi migrant workers face traumatic incidents in oversea countries. Expatriate workers face inhumane sufferings. Women workers are raped and tortured by their employers while working abroad, specifically in the Gulf nations. On average, every day more than ten dead bodies of migrant workers arrive at the Hazrat Shahjalal International Airport.

Inhumane treatment in these Gulf countries is well known to the globe. Lack of robust foreign policies, strategies, inefficient negotiation skills and poor bureaucracy are responsible for not ensuring justice for the migrant workers. Bangladeshi migrant workers often accuse the administration of Bangladesh of not providing them with adequate and preventive measures to protect its remittance warriors.

Besides, there are agony and anguish behind their migration to foreign countries despite the well-established culture of ill-treatment of the workers in the destination countries.

The latest survey of the Bangladesh government has found 2.6 million unemployed people in the country. The unemployment rate has slightly changed — from 4.3 per cent in 2013 to 4.2 per cent last year — though the government created substantial job opportunities during the period. But it is not enough compared to the vast demands. The rural areas have 1.82 million unemployed people, more than double the number of those 0.77 million in the urban areas, according to the latest Bangladesh Bureau of Statistics labour force survey.

The urban-rural population ratio is 30:70 in Bangladesh. Hence, people in the rural area is the easy target of human traffickers. Rural population is trapped into the net of the traffickers as they are desperate to earn money and support their family. Additionally, people living in the rural area are deprived of many basic facilities. It ignites people to go abroad with a dream to have a better life.

As a result, people have to go through the dreadful way which makes the consequence even worse. Migrant workers try hard to reach to foreign soil by legal or illegal way either for the survival of themselves or their families. But every way certainly has the fear of a miserable life or even death.

On the other hand, it was reported that Bangladesh is the third remittance senders to India while accommodating almost half-million illegal Indian migrant workers. According to Transparency International Bangladesh, maximum numbers of foreign workers work in Bangladesh in the apparel sector of the country. Besides, a lot of foreigners serve in various development projects, power plants, international agencies, NGOs, multinational companies, hospitals, hotels and restaurants. Many of them are taking away money illegally, which is estimated to be a whopping BDT 264 billion per year, thereby causing an annual tax revenue leakage of BDT 120 billion.

Whereas, Bangladeshi expatriate workers or even aspirants always have to go through terrific humiliation, unfairness and traumatic situation. Still, they do not get enough support from the policymakers and its executors. So, all stakeholders have to take their share of responsibility to give them the right sense of direction and the government should create adequate policies and execute them to make the lives of our migrant workers better.

Research shows, 50 per cent of Bangladeshi migrants are unskilled. We have only 2 per cent of skilled-professional migrant workers. Some 50 million people in Bangladesh are directly dependent on remittance. Absence of skills and quality education are also the causes of not securing employment in Bangladesh. It is the responsibility of the policymakers to assure quality education to those who are ultimately the prime asset to take the country forward.

Among the South Asian peers, Sri Lanka is witnessing the worst situation in terms of the youth unemployment rate at nearly 38 per cent, followed by India at over 32 per cent, Bangladesh at almost 25 per cent and Pakistan at over 21 per cent.

Per capita GDP is the most important indicator to show the prosperity of any country based on its economic growth. International Monetary Fund’s outlook has projected Bangladesh will surpass India’s per capita GDP in 2020 fiscal. Notwithstanding, purchasing power parity is vital too.

India purchasing power parity is 11 times more than that of Bangladesh now. So, it is more essential to invest in people, rather mega-development projects which even the commoners cannot afford to own like powerplants in Rampal, Rooppur et cetera. So, comparatively, Bangladesh is in a good situation to some extent but in contrast, in other imperative human development index, it requires much improvement.

However, considering one of the fastest-growing economies in the world, corruption, mega projects and irregularities are obstacles on the path of utilising the hard-earned money of the ex-pats. The justice to the sweat of the remittance warriors is always denied.

Policymakers are more interested and focused on mega investments with hefty budgets and widespread irregularities. Power quarters and people close to them take this advantage to launder the well-earned money of the remittance warriors to the foreign countries. Hence, Bangladesh is far away to reach a better position in the human development index.

It is high time we all should concentrate on increasing human development first. It is essential to provide all the facilities to the expatriate workers conveniently and provide them with all the legal supports to get justice. After all, it is these knights who are always there to contribute the most to our economy even during the COVID-19 pandemic.