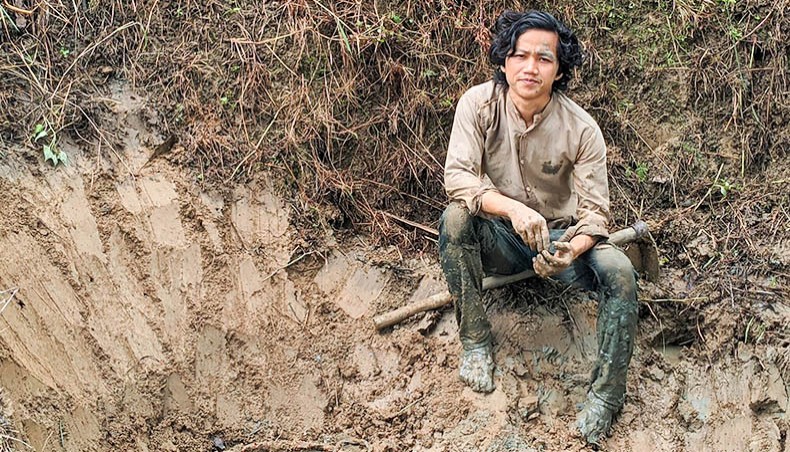 Local people and activists from Mro community have raised their voice against the construction of a 5-star hotel and amusement park in the Naitong Hill area, popularly known as Chimbuk Hill, Bandarban. During an interview with Nasir Uz Zaman for New Age Youth, Reng Young Mro, a young activist and organiser of the movement, talks about the protests

New Age Youth: You are an organiser of the on-going movement against the five-star hotel project in Bandarban. Why you have joined the movement?
Reng Young Mro: The movement against building a five-star hotel and tourist centre in Naitong Hill area is spontaneous participation of the local people. The Mro people had bitter experiences of losing land and being evicted in the past. In 2006, Mro people were evicted from the lands after the acquisition of 11,500 acres of land in Suyalak and Tangkaboti union. These evicted people had built a settlement in Kramadi Para, Ramri Para, Shakkhoy Para, Doba Para and in some other villages. Most of the people are still landless and by paying tax, they are working or cultivating in the lands they were evicted from, which were their ancestral lands.

Although these lands were taken for military training, a large part of the lands has been leased to companies and big projects. Now the Mro people are working there in exchange for wages. These people with bitter experiences are now seeing that five-star hotels and tourist centres are being built in their remaining lands.

If the same thing happens again, where these people will go? As a conscious person of the Mro community, I think this movement is logical. We have no place to go. That is why I have joined this movement which I believe as my historic responsibility.

New Age Youth: What are your concerns about the hotel?
Reng Young Mro: The Mro people of Naitong Hill area have been deprived of education, health care and other facilities for centuries. No initiatives have been taken to increase the quality of life of the local people. In this situation, it is absurd to take away the farmland of these people and to build a five-star hotel under the guise of deception. The five-star hotel will deprive the local people of their farmland and also limit their access to the areas where they have to move daily. Tourists who will come to stay in the five-star hotel will severely disrupt the normal life of the local people due to the differences in lifestyle. Local women will also feel insecure.

It is said that in the project, there will be 12 villas on 12 hills which will be connected through cable cars. Tourists will travel from one hill to another by cable cars and the local people will lead a normal life below. It will disrupt the privacy of the local people. Most importantly, in the end, people will either have to leave their lands and move to another place or they will be evicted from there.

Just think a bit, what could be more inhumane than taking a project denying local peoples’ rights to the land, neglecting their concerns and privacy, disrespecting their diverse cultural lifestyle and ignoring their demands who are already deprived of education, health care, drinking water, electricity and other facilities? Mro people do not want the five-star hotel but their rights to the land.

New Age Youth: It is said that the development of tourism or the tourist resort will improve the locals’ life and livelihood. What is your point of view?
Reng Young Mro: I do not think that the improvement in the quality of life of the local people is related to the business interest of companies in the name of tourism. Improving the quality of life is related to the development of education, health services, the opportunity to be financially self-dependent by having control over one’s land, and so on. Are these met with the establishment of tourist centres? Such things are always said to justify the land grabbing for establishing tourist centres in the Chittagong Hill Tracts. It is also said that tourist centres will increase the self-employment of the locals and they will be economically benefited. But the reality is different.

Lands after lands are taken away from local people during the establishment of the tourist centres. As a result, people lose the land on which they used to make living and also lose the opportunity to take advantage of the land for economic gain. Consider the Sajek tourist centre as an example.

More than 200 Pangkhua and Lushai families were evicted from Sajek and many left the place silently. Those who were the victims of eviction or those who have to go away from their homeland, can we assume that their quality of life has improved?

Local people were promised to get arrangements for shops in Nilgiri tourist spot if they gave their lands. But now, we do not see any opportunities for those local people. Some locals could sale fruits in the parking space only. It seems tourists and tourism businesspersons look at them with the eye of compassion. But the locals do not want such sympathy. They want their right to do business in their lands.

New Age Youth: In a speech, you said about language and land exploitation that the CHT people faced. Can you elaborate your point?
Reng Young Mro: I have already marked some points about the question of land and to address the question of language, I want to identify it as cultural aggression of the mainstream people against the hill people. We see a tendency to change the local name into Bangla of any place in the CHT. The name of a hill or a stream or any place involves the emotions, stories, historical events and culture of the people who have lived there for hundreds of years.

For years, people in Chimbuk area or any part of the CHT have kept the forest and the hills as their own. The nature, as well as the names, are involved in their lives. For example, the name of the hill Shong Nam Hung immediately makes us understand that it is the hill of gods. Our ancestors believed that the gods lived there. The appeal of the hill is culturally important to us. But now it has become Nilgiri which is not understandable to local people at all.

Such examples will make a long list. It is deliberately done to deny our relations with the hills or places or the lands.

New Age Youth: A group of local people held a human chain supporting the hotel project. Do you have anything to say about that?
Reng Young Mro: It was a conspiracy of the pro-five-star hotel project people. We were all disappointed for the incident that some villagers of Ali Kadam were taken to join in the human chain by deceiving them. Many of the villagers who joined the human chain did not even know exactly why they were brought to Bandarban. Some villagers were told that they were being taken to Bandarban for a picnic. Those who understood the matter were intimidated in various ways.

To me, it was a failed conspiracy. Because most of them have already cleared their position to the protesters and the villagers. They said that they are always against the project and they will continue to participate in the movement.

New Age Youth: Do you or the local people have any fears about the protests?
Reng Young Mro: Yes, of course, we have fears. Just think, what had happened to the Ali Kadam people. The people who are working to establish the project are very powerful. They can do anything to stop our movement and to complete the project works. Still, some powerful local leaders are also working desperately to establish it. As the big business interest is involved here and they are also powerful, we could not rule out the possibilities of attacks on the protestors. But we will continue this movement as we have no other way.