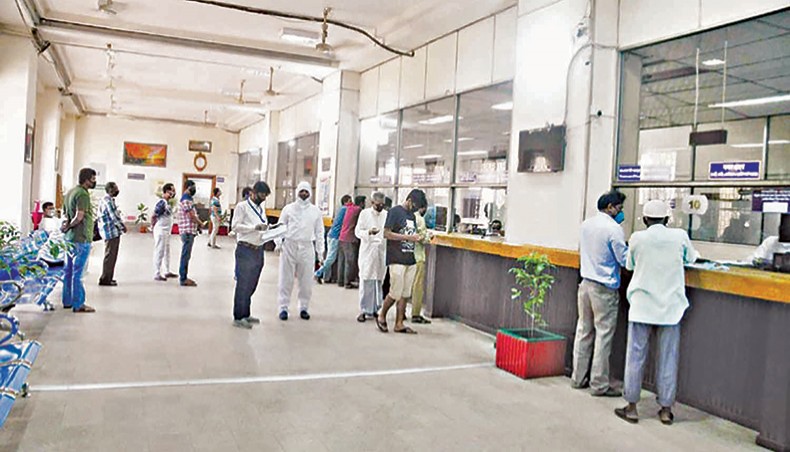 A file photo shows clients receiving services from officials inside a branch of a bank in Dhaka. The government’s borrowing from the country’s scheduled banks increased slightly in November with its net borrowing remaining as low as Tk 2,950.49 crore in the July-November period of the current fiscal year 2020-2021. — New Age photo

The government’s borrowing from the country’s scheduled banks increased slightly in November with its net borrowing remaining as low as Tk 2,950.49 crore in the July-November period of the current fiscal year 2020-2021.

However, the government’s loans from the banking sector remained far lower than its budgetary projections of Tk 84,980 crore.

The latest update showed that the rate of implementation of the annual development programme hit a five-year low of 12.79 per cent in July-October of the current fiscal year 2020-2021.

Government ministries and divisions managed to spend only Tk 27,453 crore in the first four months of FY21 against the annual outlay of Tk 2,14,611 crore.

In the July-November period this year, the government’s net borrowing from the banking sector dropped by 92.57 per cent or Tk 36,765.11 crore from Tk 39,715.6 crore in the corresponding period last year.

In the first four months of FY21, net borrowing was around Tk 945 crore as the government repaid its debt with the central bank instead of making any fresh borrowing.

In November, the government’s gross borrowing from scheduled banks as well as from the central bank increased slightly.

Apart from the slow pace of spending in the annual development programme implementation, the government’s net borrowing from the banking system has been remaining low in FY21 because of the increase in the sales of national savings certificates.

In July-October of FY21, net sales of national savings certificates stood at Tk 15,642.36 crore in the July-October period of FY21 against the government’s target of Tk 20,000 crore for the entire fiscal year.

Sales in the four months accounted for 78.21 per cent of the annual target due to a buying spree as demand for the high-yield investment tools surged amid a plunge in bank deposit rates.

In the banking sector, the weighted average deposit rate dropped to an all-time low of 4.79 per cent in August, prompting people to divert their funds to other investment tools, including NSCs where the yield rate is around 12 per cent.

Besides the NSC sales rise, the government also received funds from different autonomous, semi-autonomous and state-owed entities that helped it to meet the deficit financing without depending solely on the banking sources.

For deficit financing, the government has planned to collect Tk 1,09,983 crore from domestic sources, including banks, and from the public against the sales of NSCs.