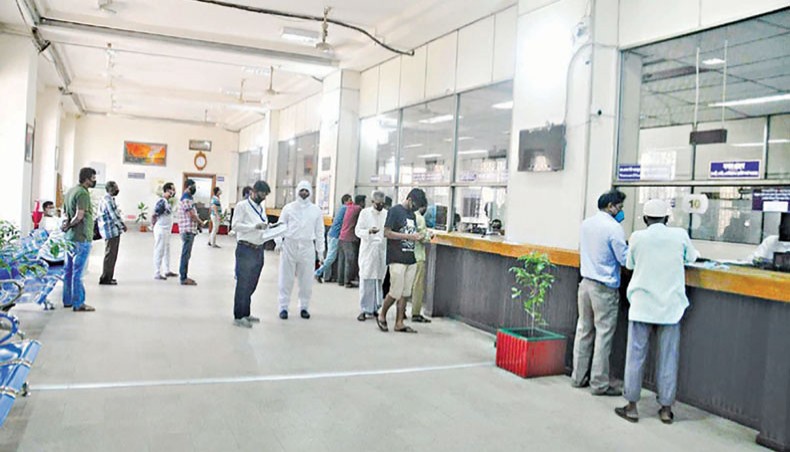 A file photo shows clients receiving services at a branch of a bank in the capital. Capital shortfall in eleven banks totalled at Tk 19,296.08 crore at the end of September 2020 thanks to the Bangladesh Bank’s policy relaxations amid the COVID-19 outbreak. — New Age photo

Capital shortfall in eleven banks totalled at Tk 19,296.08 crore at the end of September 2020 thanks to the Bangladesh Bank’s policy relaxations amid the COVID-19 outbreak.

The number of banks defaulting on maintaining minimum capital requirement was 13 in March, which dropped to 11 at the end of September.

The capital shortfall in the country’s banking sector was Tk 23,612.43 crore at the end of December 2019 when 12 banks had failed to maintain minimum required capitals.

The BB data showed that the overall capital to risk (weighted) assets ratio of the banks was 11.94 per cent at the end of September.

The data also showed that the risk weighted assets in the banking sector stood at Tk 11,05,257 crore at the end of September.

Against the risk weighted assets, the overall capital requirement of the banks was Tk 1,13,278.03 crore at the end of September whereas the sector maintained Tk 1,31,984.21 crore in capitals.

Experts said that the relaxation of loan classification policy and increased supply of money as part of the BB’s expansionary monetary policy had acted as catalysts for having a better financial picture of the banks.

They, however, said that the risk factors of the banks remained with researchers predicting that the financial health of the banks would deteriorate in the coming days.

As per the Guidelines on Risk Based Capital Adequacy, the failure of any bank to maintain the minimum capital within the stipulated period may result in punitive measures including imposition of penalty by the central bank as per the section 13(7) of the Bank Company Act 1991 (revised up to 2013).

Under existing rules, banks are supposed to maintain 10 per cent capital against their risk weighted assets.

Although the 11 banks suffered capital shortfalls, the rest 48 banks managed to maintain adequate capitals against their risk weighted assets.