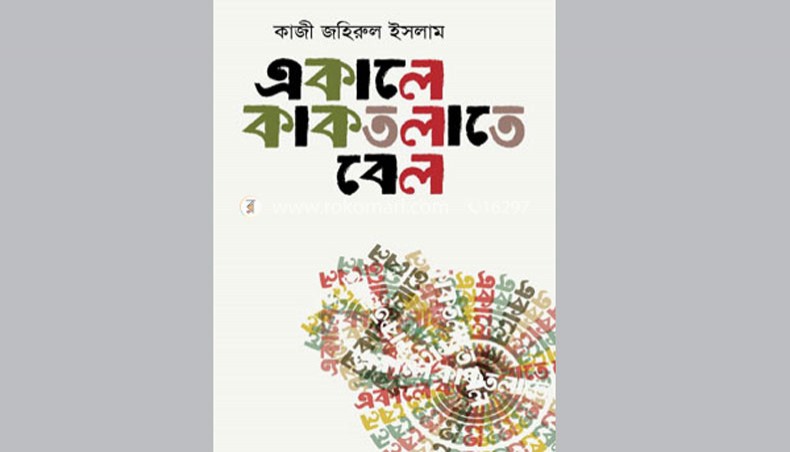 QUAZI Johirul Islam is recognised as one of the major poets in the contemporary Bangla literature. Although currently based in New York, working at the United Nations, he is a prolific writer constantly expressing his creativity through poetry, novels, autobiographical writings, and travelogues. As a poet, he is known for experimenting with new forms, contents and styles that is astonishingly fresh and unveils new possibility for the contemporary Bangla poetry. For instance, he published the very first collection of Bangla poems without using any finite verbs (Kriya-padhin Kriya-kalap). He also has a collection of poems reflecting on the mystery of the body (Deha Kabya). In his collection, Ekale Kaktalate Bel, he introduces counter-realism (pratibastabata) which is the subject of this present reflection. Before discussing further let me contextualise counter-realism within the general trends in poetic expression.

In ancient Sanskrit literary theory, one of the ways poetic expression has been referred to is vakrokti (crooked speech) in contrast to svabhavokti (natural speech). Natural speech is the common form of language, used, for example, in our everyday communication. In contrast, crooked speech, used prominently in poetry, is known for expressing things in an indirect way. Traditionally various literary elements such as similes, metaphors, imageries and so on have been used to convey something different from the actual semantic meanings of words. The Bangla poetry also has been usually written using these traditional literary elements. In such poems, the reality of the things is not directly challenged but is expressed by a skilful poet with surprising associations (eg, someone’s face compared to the moon) that generate new meanings and make the reading experience pleasant. Then, in the 20th century, ‘magic realism’ with fantastical elements expressing imaginary aspects beyond the world of ‘normal experience’, and ‘surrealism’ with topsy-turvy, sometimes irrational elements, expressing the confused, nostalgic or turbulent thoughts, experience and emotions, became prominent in post-world war literary imagination and artistic expression. Jibanananda Das made masterful use of magic realism and surrealism in the Bangla poetry.

Quazi Johirul Islam, in his 2019 collection of Bangla poems Ekale Kaktalate Bel, introduces ‘counter-realism’ (pratibastabata). The poet is very self-conscious about this, flagging it in the title of the collection, specifically drawing our attention to and briefly defining the term ‘counter-realism’ in the introduction, naming the eleven poems exhibiting this feature, and encouraging younger poets to explore the possibility of using ‘counter-realism’ in the Bangla literature. Counter-realism is not a distortion of reality. It is definitely not a falsehood or denial of reality. It also does not take us away from the reality to a fantastical world of imagination or to a dreamy world of thoughts and emotions. On the contrary, used skilfully counter-realism helps to see the reality even more closely and powerfully. Counter-realism is a radical shifting of perspective, challenging our usual ways of seeing and talking about things, and directing the mind’s eye to see the reality from a completely different angle. Here are a few lines from Quazi Johirul Islam’s poem to help us understand counter-realism. It must be noted that poetry is generally not easy to translate; with counter-realism it’s even harder. The following is my best attempt.

The boat has brought the sailor, sailing

the current of the technology-ridden river,

in the disoriented storm… (Paran Majhi/Sailor)

We are used to saying that a sailor or a boatman sails a boat. Here the poet shifts the subject and states that it is the boat that sails the boatman or the sailor. The key feature of counter-realism poetry is the shifting of agency. The subject that we generally think as the controller or agent of the action is not in control here. The loss of control is shown not only by switching the subjects (ie, ‘boat sailing the sailor’ as opposed to ‘the sailor sailing the boat’), but also by placing them in the current of a river ridden with technology. Here the poet is showing us how traditional modes of livelihood are challenged with fast developments in technology that has quickly taken control over the river. The plight of the sailor is expressed in the following lines:

The touch of salt in the deep layers of the bones

These two lines show the tragic consequences of the fast technological developments in the twenty first century. The sailor’s body and the middle-aged boat are not different. The sailor has been starving for a long time.

In another poem titled ‘Eider Pratikshay’ (Waiting for Eid), Eid being a sacred holiday in Islamic tradition, the poet writes ‘the sarees carefully change the women everyday’. The poem ‘Bhat’ (Rice), expresses the struggles of immigrant workers, who sacrifices their own health to support their families, in the following lines:

the dreamless eyes of the householder.

Back in the soils of home-land

These examples should suffice to illustrate that Quazi Johirul Islam has found a powerful way to express the grim reality of our times through his counter-realist poems. The main feature is the loss of control of the traditional subject. Objects that we use, consume, or wear have gained agency. We are so much lost in this that we cannot see it unless we pause for a while. These counter-realist poems present our lived reality with a strong blow on the language itself. The shift of subjects stirs up and compels the reader to rethink the quandary of development and progress that has entangled more than liberated the human person. Reality here is revealed at the expense of certain linguistic conventions to the extent that sometimes it is hard to comprehend what is actually going on. This is yet another beautiful gift of Quazi Johirul Islam to the Bangla literature — a new way to capture the commotion and confusion of the 21st century, when robots are actually talking, humans are surrendering their job, teenagers and the adults alike are lost in the narcissistic world of social media and the entire human species become captive at the hands of an invisible virus named COVID-19.

This collection also has many other beautiful poems, fifty in total, including a few eulogies of great people and some haikus. These deserve to be read, reflected on, and discussed carefully by the connoisseurs of the Bangla poetry and aspiring young poets.