75 years ago and what it means today 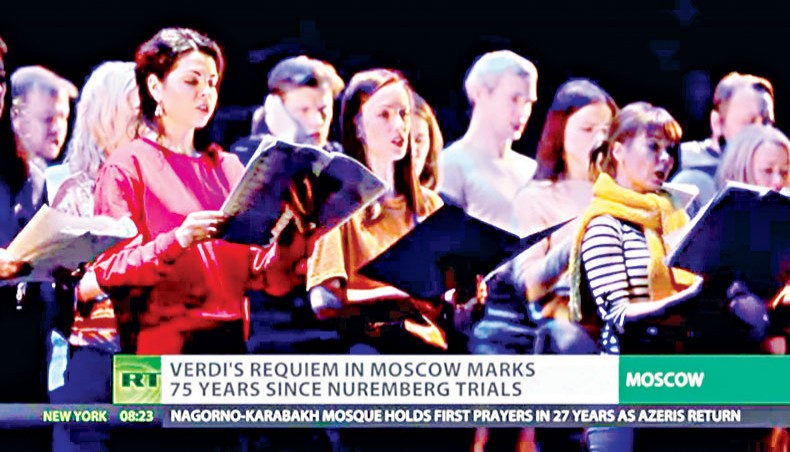 ON NOVEMBER 21, 2020, Russia celebrated the 75th anniversary of the beginning of the Nuremberg Trials which started on November 20, 1945 and lasted almost a year, until October 1, 1946. The tribunal was given the task of trying and judging 24 of the most atrocious political and military leaders of the Third Reich.

For this unique celebration — so we shall never forget — Russian leaders and people of the Arts and History organised a special performance of Giuseppe Verdi’s ‘Requiem’ at Moscow’s Helikon Opera Theatre. Daniel Hawkins, from RT, introduced this extraordinary event, as a journey through history, a journey through life and death, when some of — at that time — most genocidal people in history had to answer for their crimes.

This opera event was prepared for more than a year and was first performed in January 2020 for the Holocaust victims and the victims of the Nazi concentration camps in Leningrad. The Nuremberg Trials were conducted by an international military tribunal. They resulted in 12 death sentences.

The idea of the ‘Requiem’ performance is ‘not just to appeal to emotions, but to reason. Because if we fail to learn from history, the tragedy could be repeated.’

This is precisely what Sergei Novikov, head of the Russian presidential directorate for social projects, intimidated. He says, ‘Despite of what we have seen happening 75 years ago — we do not seem to have learned a lesson. Today we seem to go down the same road, which is frightening.’

The musical performance interplays with theatrical realism — so memories are awake and moving — better than a museum. The educational impact of this celebration of remembrance is extremely important especially for the young people, who do not remember these events, but with this first-class performance, they may learn a crucial lesson, a lesson hardly talked about in history books and even less so in the west.

If we compare what has happened then — 75 years ago — actually the anti-Jewish demonstration in Berlin, known as Kristallnacht, on November 9 and 10, 1938, effectively the beginning of World War II, and look at today’s extremism in Europe, Germany, France, Austria, Belgium, we know that we are not far from a tyranny we knew as ‘nationalsozialismus’, a political Nazi-concept of the late 1930s and up to mid-1940s, that today can best be compared with extreme neoliberalism and merciless oppression of peoples’ rights by police and military.

In fact, we may be steps ahead of what Hitler and his crime and war cabinet had done, but again, today, like then, we are blind to it. There may be a time when we can no longer move, when we are in constant lockdown, masked with dismembered faces, so to speak, kept away from each other under the pretext of social distancing so that we cannot communicate with each other, all for reasons of public health, for the ‘good intentions’ of our governments to protect us from an evil virus — the coronavirus.

Today, this oppression is the result of a long-term plan by a small elite to implement ‘the great reset’.

THERE is, of course, a good reason, why Moscow wants the world to remember what WWII meant and how eventually Nazi-Germany was defeated — yes, largely if not solely by enormous sacrifices of the Soviet Union. Some 25 to 30 million USSR soldiers and Soviet citizens had left their lives for salvaging Europe — and possibly the world — from an all invading fascism.

The United States, nominally an ally of the Soviet Union, had clandestinely funded the Third Reich’s war against the Soviet Union. One of the key purposes for the US getting ‘involved’ in WWII, other than defeating the British empire, was to defeat their arch-enemy, communist Soviet Union. The Rockefellers funded Hitler’s war machine by providing them with hydrocarbons, with petrol, the energy that drove the war.

On the other hand, the Federal Reserve, via the Bank for International Settlement — the pyramid tower still omnipresent in Basle, Switzerland, near the German border — transferred gigantic monetary resources to the Reichsbank (at that time Hitler’s equivalent of a German central bank).

Verdi’s ‘Requiem’ performance in Moscow on November 21 is important to go back in history and open the ‘memory books’ in front of our eyes. It is even more important, as we see the trend of fascism taking over the entire European continent and possibly also the United States.

Europe basically ignores the importance of the 75th anniversary of the Nuremberg Trials which still, as of this date, provides precedents for international war crimes — except, these precedents are miserably ignored. If not, we would have multiple repeats of Nuremberg in our days and age with European and US leaders in ‘retirement’ but still with power. Our dystopian western world is beset by war criminals even to the point where they blackmail judges of the International Court of Justice and the International Criminal Court in The Hague, not to touch their — the European and US — war crimes, or else….

That’s where we have arrived.

Since we are going back to the times when WWII and Nuremberg happened, we should take the opportunity to also look at the big picture, one that may be at the root of this new wave of fascism invading Europe. It is, in essence, a health dictatorship; it has become a health martial law. Many countries have ratified, quietly, or rammed it through parliament without the public at large noticing — a law allowing them to switch from everyday life to an emergency situation; ie, (health) martial law.

The big picture, though, is a diabolical plan of eugenics. Yes, it’s a term nobody wants to use, but it must be said, because it’s one of the fundamental principles that lies in all that is planned, the 2010 Rockefeller Report and the extremely important WHO report ‘A World at Risk — Annual Report on Global Preparedness for Health Emergencies’, by the Global Preparedness Monitoring Board in September 2019.

Key members of this monitoring board include the World Bank, the International Monetary Fund, the Centres for Disease Control and Prevention and many more influential players, who have been concocting the ‘preparedness’ for a new epidemic since at least 2016, when the World Bank set up a special ‘health emergency fund’ to face the ‘next pandemic’.

Also, part of the SARS-Cov-2 preparedness and planned outbreak was Event 201 that took place on October 18, 2019 in New York City — sponsored by Bill Gates, the WEF, and the Johns Hopkins School for Medicine (Rockefeller created and funded) — which simulated the outbreak of a SARS-Cov-2 virus which curiously happened a few weeks later. The ‘outbreak’ was actually officially announced on the dot of the beginning of the decade 2020.

The big picture scheme also includes as an aftermath to COVID-19 the ‘great reset’ by Klaus Schwab of the WEF, a plan to implement the ‘4th industrial revolution’ and the enslavement of the remaining population. The Rockefellers and Bill Gates, Kissinger and many more have nurtured the idea of massively reducing the world population for at least the last 70 years.

Ever since the Rockefellers espoused the concept of the ‘Bilderberger Society’ (a parallel organisation to the WEF with overlapping and ever-moving memberships), their one and only continuous ‘project’ was a selective population reduction. And they actually never made it a secret. See Bill Gates’s TedTalk in February 2010 — just about the time when the infamous 2010 Rockefeller Report was issued, the one that has us now in ‘lockstep’ following all the rules and regulations issued by the World Health Organisation  and supported by the entire UN system.

Why then was the eugenics agenda never seriously picked up by the mainstream, by the public at large? Possibly because nobody can even imagine people so evil — or allow me to call them non-humans — to actually want to make this reality. But these non-humanoids do exist. How they infiltrated themselves into human society is a mystery.

By the way, have you ever seen Bill Gates — with his obnoxious grin — wearing a mask? Or the Rockefellers, Kissingers, et al? How come they are always spared from this deadly virus, SARS-Cov-2? How come they get very old, but appear to be always in good health? What kind of life elixir are they using?

Back to the eugenists. To implement such a massive plan on a worldwide scale, one needs a uniform approach to world health. In 1948, just a couple of years after the Nuremberg Trials started, where war criminals like the Rockefellers should also have been indicted for supplying the enemy (German Nazis) with energy to drive their (anti-Soviet) war machine — back then, in 1948, Rockefeller created the World Health Organisation.

The philanthropic Rockefeller Foundation has marked the field of health like no other organisation. The oil magnate, John D Rockefeller, wanted ‘to promote the well-being of mankind throughout the world.’ Hence, the foundation created and provided the original funding to set up the WHO in 1948. On April 7, 1948, the WHO inherited the mandate and resources of its predecessor, the Health Organisation, which had been an agency of the League of Nations. Twenty-six (out of then 58) UN members ratified the WHO as a UN agency under the UN Constitution.

Once you have ‘global health’ under one roof, the World Health Organisation, funded primarily by the Bill and Melinda Gates Foundation and the pharmaceutical industries (predominantly the Global Alliance for Vaccines and Immunisation — also created by Bill Gates in 2000) and you also have the predominant donor, Bill Gates, an obsessed vaxxer (and eugenist) without any medical training, choose the WHO’s director general — Dr Tedros Adhanom Ghebreyesus, a buddy of Gates and former board member of GAVI — it is relatively easy to make the foundation of the WHO’s health policies based on vaccination.

That’s what we see today. As we have heard from Gates’s TedTalk, vaccination seems to lend itself perfectly to reduce the world population. It has the further advantage, that if anything goes ‘wrong’ — no vaccine company can be held responsible, let alone being sued. For example, if people get seriously ill or die from the vaccinations — which would not be a surprise as the COVID-19 vaccines are being planned to be administered in warp speed — the vaccine pharmaceuticals cannot be sued.

In fact, vaccine companies do not bear any liability risk. The National Childhood Vaccine Injury Act of 1986 was signed into law by US president Ronald Reagan on November 14, 1986. The NCVIA’s purpose was to eliminate the potential financial liability of vaccine manufacturers due to vaccine injury, since lawsuits led many manufacturers to stop producing vaccines, a lame argument, but that shows once more the lobbying power the pharma industry commands.

That’s where we stand today. Any sinister vaccination agenda, no matter how hurtful to the public, is home free. Today we are at this crucial point of massive forced vaccination. Many governments; ie, the United Kingdom’s Boris Johnson and Australia’s Scott Morrison, have already advanced the idea of a vaccination pass. Without it you are banned from flying and from just about every public event. That’s promising.

And one might ask what does that have to with public health? What is the real agenda behind it?

Again, returning to the Nuremberg Trials, aren’t we in the midst of a world tyranny to which all 193 UN member countries subscribed, or were coerced into — a tyranny that has already been genocidal, in as much as it destroyed the world economy, creating countless bankruptcies, unemployment, untold poverty and misery and death, and now a potentially genocidal massive vaccination campaign, the effects of it might be death in the medium to long term, but ‘untraceable’, or too late by the time the cause is discovered.

A world tyranny inflicted by all 193 UN member countries — whatever their motivation — all these governments and the heads of the WHO and the entire UN system belong before a new Nuremburg-type tribunal where the same legal principal would be applied as 75 years ago in 1945.

DissidentVoice.org, November 30. Peter Koenig is an economist and geopolitical analyst. He is also a research associate of the Centre for Research on Globalisation.