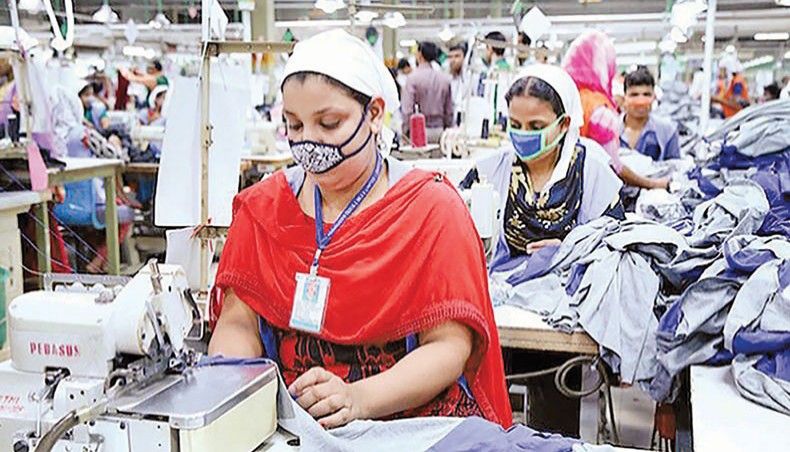 A file photo shows workers sewing clothes at a readymade garment factory on the outskirts of Dhaka. The country’s export earnings grew by 0.76 per cent to $3.07 billion in November 2020 from $3.05 billion in the same month of 2019.— New Age photo

Readymade garment export, however, fell for the second consecutive month in November year-on-year.

In five months (July-November) of this fiscal year 2020-21, export earnings’ growth was negative only in October, according to the Export Promotion Bureau data released on Thursday.

Exporters said that the country’s apparel export witnessed a meagre growth in August and September with the reinstatement of the cancelled orders by global buyers but the RMG export started declining again in October due to the second wave of COVID-19 pandemic.

The RMG export posted a decline of 2.66 per cent year-on-year in November, signifying the impact of lockdowns and slowdown in retail sales in the West, they said.

The EPB data showed that earnings from readymade garment exports in the five months of FY21, however, fell by 1.48 per cent to $12.89 billion from $13.08 billion in the same period of FY20.

‘After a free-fall of RMG export during March-May this year and struggle through June and July, export saw a meagre growth in August and September. Though the short lived recovery of export was contributed mostly by the reinstatement of the cancelled orders during the peak of the pandemic,’ Rubana Huq, president of the Bangladesh Garment Manufacturers and Exporters Association, told New Age.

Rubana said that the sales in Europe and the United States had dropped by 13 per cent in October as the consequence of the resurgence of the virus was apparently visible in global retail sales.

‘Such trend in retail is obviously alarming for the industry, particularly bringing the worrying context of global economy, trade, unemployment, and resulting impact on disposable income and spending, the solid recovery may still be far away,’ she said.

In November the growth of knitwear export was 4.9 per cent while export of woven garments fell by 10.48 per cent.

‘This is the 16th consecutive month for woven garment having a downfall in export. One of the reasons why knitwear could have retained some growth is the demand for clothing for home use and the peak season of sweaters which ended in September,’ the BGMEA president said.

Export earnings from leather-footwear in the period decreased by 1.44 per cent to $226.84 million from $230.16 million while other leather products fetched $87.87 million with a 16.02-per cent negative growth in the period.