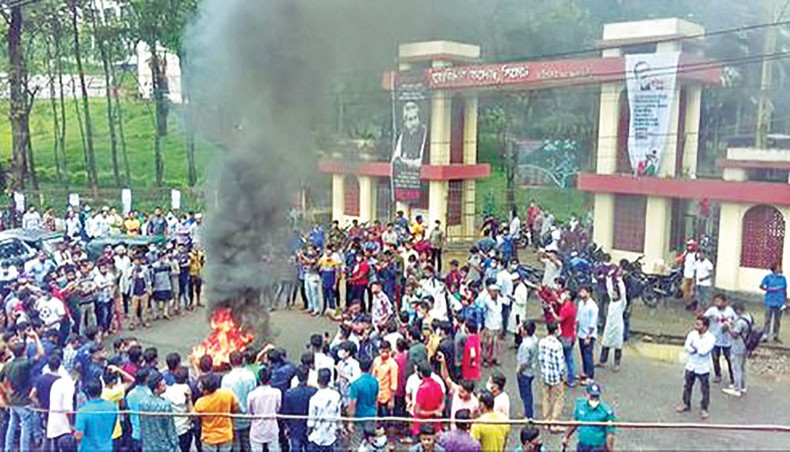 MC College students burn tyres while staging a demonstration in front of the college on Sylhet–Tamabil Highway in protest against the rape reportedly by Bangladesh Chhatra League activists in the college hostel. — New Age file photo

Eight activists of Bangladesh Chhatra League, student organisation of the ruling Awami League, on Thursday were indicted in the case filed for gang-raping a newly married woman in Sylhet MC College Hostel on September 25.

He said that Shah Paran police inspector Indranil Bhattacharya, also investigation officer in the case, filed two charge sheets with the Chief Metropolitan Magistrate Court, Sylhet at noon on charges of gang-raping the victim and demanding extortion from her husband.

The SMP officer said that the chief metropolitan magistrate Md Abul Kashem accepted the charge sheets after the hearing and sent them to the Metropolitan Session Judge’s Court for framing charges against the eight accused.

Indranil Bhattacharya said that the six BCL activists were directly involved in raping the victim according to the DNA test results.

He said that Rajan and Ainuddin of BCL had helped the six party colleagues in raping the victim one after another keeping her husband confined to the college hostel, according to police.

Earlier, police had also submitted a charge sheet against Saifur, the prime suspect, and Rony for keeping illegal arms in their possession.

In the evening of September 25, a group of BCL activists kidnapped the newly-wed couple from in front of the main entrance of the MC College at Tilagar in the city.

Later, they gang-raped the woman at the college’s male student hostel at Baluchar in the city.

Shah Paran police rescued the victims from the college hostel and admitted the woman to the one-stop crisis centre of Sylhet Osmani Medical College Hospital.

Later in that night, the victim’s husband filed a case in this connection with the police against six named and three unidentified persons.

The police also raided the college hostel on that night and seized a number of weapons, including a firearm, from a room in which Saifur had been living illegally for several months.

Shah Paran police sub-inspector Miltan Sarker also filed a case in this regard against Saifur, the police said.

The police so far arrested eight suspects all of whom were involved with the activities of the MC College unit of Bangladesh Chhatra League.

Three separate committees were also formed by the MC College authorities, the education ministry and the High Court to probe the gang-raping incident.

The MC College authorities expelled four students — Saifur, Rony, Masum and Rabiul — after a probe committee found their involvement in the incident.