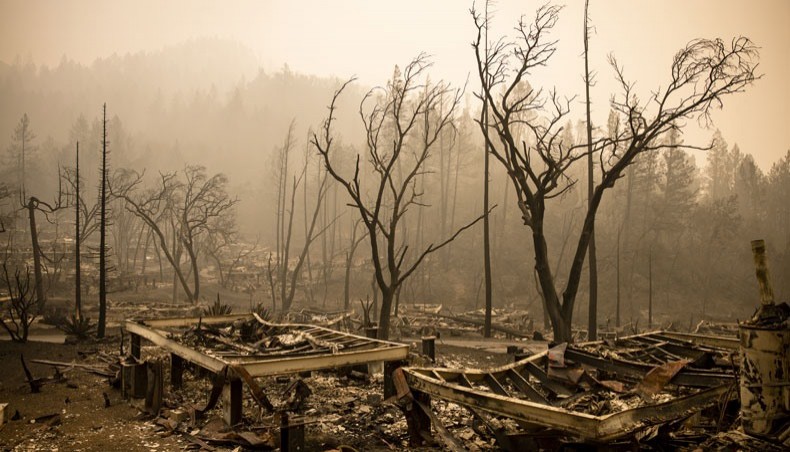 A deadly mix of extreme heat, air pollution and intense farming are combining to produce the ‘worst outlook for public health our generation has seen’, according to the Lancet’s fifth annual report on the links between health and climate.

The assessment showed that the last two decades have seen a 54 percent increase in heat-related deaths among older people, with extreme heatwaves claiming close to 300,000 lives in 2018 alone.

During 2018, France alone experienced 8,000 heat-related deaths among over-65s, inflicting an economic cost equivalent to 1.3 percent of GDP that year, the report found.

‘The threats to human health are multiplying and intensifying due to climate change and unless we change course our healthcare systems are at risk of being overwhelmed in the future,’ said Ian Hamilton, executive director of the Lancet Countdown report.

Heat and drought are driving sharp increases in human exposure to wildfires, with 128 countries seeing an increase in the population injured, killed or displaced by blazes since the early 2000s, the report found.

It said that projected sea level rises caused by fossil fuel, farming and transport emissions could threaten to displace up to 565 million people by 2100, in turn exposing them to a range of health problems.

With more than nine million deaths attributable to poor diet each year, the expert panel behind the report found that mortality linked to excess red meat consumption had risen 70 percent in just three decades.

Excess red meat eating was behind at least 13,000 deaths in France in 2017, out of nearly 90,000 deaths that year attributable to poor diet.

They called for urgent action to mitigate emissions in order to stave off the worst effects of climate change and reduce its impact as a health threat multiplier.

‘Now is the time for all of us to take the environmental determinants of health more seriously,’ said The Lancet’s Editor-in-Chief Richard Horton.

‘We must address the climate emergency, protect biodiversity, and strengthen the natural systems on which our civilisation depends.’

The report comes near the five-year anniversary of the Paris climate accord, which enjoins nations to limit global temperature rises to well below 2 Degrees Celsius above pre-industrial levels through sweeping emissions cuts.

The agreement also envisages a safer warming cap of 1.5C.

While lockdowns and travel restrictions are likely to mean that greenhouse gas emissions fall in 2020, there are fears that fossil fuels will be lent on by governments to power their pandemic recoveries.

The Lancet panel called for an ‘aligning of climate and pandemic recovery’ to deliver near- and long-term health and economic benefits.

It said that the health benefits from lower levels of air pollution and fewer extreme weather events as well as improved diets alone would more than pay for the costs of climate mitigation.

‘With trillions being invested globally in economic support and stimulus there is a genuine opportunity to deliver a triple win — one that improves public health, creates a sustainable economy and protects the environment,’ said Maria Neira, director of the department of environment, climate change and health at the World Health Organisation.

‘Failure to tackle these converging crises will lock in huge amounts of fossil fuels condemning the world to a future of climate-induced health shocks.’