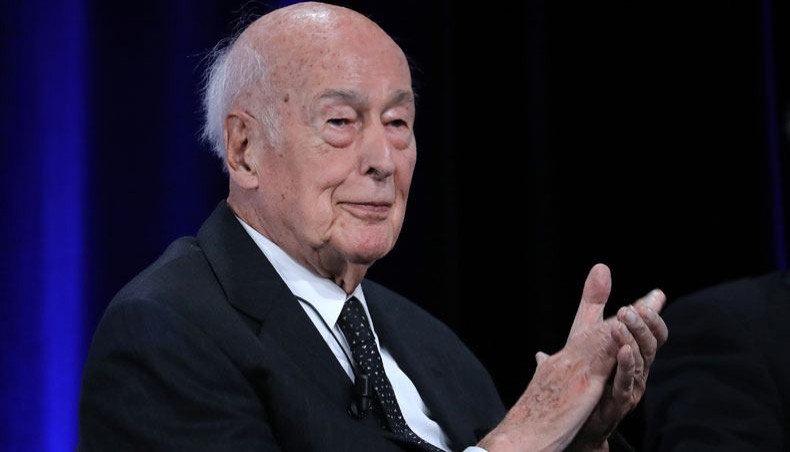 In this file photo taken on June 20, 2019 former French president Valery Giscard d'Estaing applauds at the conference of the 50th anniversary of the election of Georges Pompidou to the Presidency of the Republic 'With Georges Pompidou, think France: inheritances and perspectives' in Paris. -- AFP photo

Former French president Valery Giscard d’Estaing, a leading advocate of European integration who led his country into a new modern era, has died of COVID-19, his family said.

Giscard, who had been in hospital several times in recent months for heart problems, died late Wednesday ‘surrounded by his family’ at the family home in the Loire region.

‘His state of health had worsened and he died as a consequence of COVID-19,’ the family said in a statement sent to AFP, adding that his funeral would be strictly private, according to his wishes.

‘His death has plunged the French nation into mourning’, Macron said, describing Giscard as ‘a servant of the state, a politician of progress and freedom’.

Giscard made one of his last public appearances on September 30 last year for the funeral of another former president, Jacques Chirac, who had been his prime minister.

He became the 20th century’s youngest president at 48 when in 1974 he beat his socialist rival Francois Mitterrand, to whom he then lost after his seven-year term in 1981 in a failed re-election bid.

His presidency marked a clear break from the Gaullist conservatism of postwar France, which had been dominated by Charles de Gaulle and his successor Georges Pompidou.

In France, he is remembered for his radical reform drive, which included the legalisation of abortion, the liberalisation of divorce and the lowering of the voting age to 18.

In Europe, he helped drive moves towards a monetary union, in close cooperation with his German counterpart chancellor Helmut Schmidt, with whom he became friends and whose leadership years almost overlapped with his own.

Together they launched the European Monetary System, a precursor of today’s single currency, the euro.

‘For Valery Giscard d’Estaing, Europe was to be a French ambition and France a modern nation. Respect,’ said Michel Barnier, the EU’s chief Brexit negotiator.

He ‘succeeded in modernising political life in France,’ added former French president Nicolas Sarkozy, praising the ‘great intelligence’ he used to master ‘even the most complex international problems’.

Like Schmidt, Giscard was also a firm believer in strong ties with the US.

With his death, France ‘has lost a statesman who chose to open up to the world’, added Sarkozy’s socialist successor Francois Hollande. He hailed a man who was ‘resolutely European’ who helped strengthen Franco-German unity.

It was at Giscard’s initiative that leaders of the world’s richest countries first met in 1975, an event that evolved into the annual summits of the Group of Seven club.

With a more relaxed presidential style than his predecessors, ‘VGE’ was sometimes seen in public playing football or the accordion.

He also hosted garbage collectors to breakfast and invited himself to dinner at the homes of ordinary citizens.

Giscard involved his family in his political appearances, had the blue and red of France’s ‘tricolore’ flag toned down, and the Marseillaise national anthem slowed.

Giscard was firmly part of the elite.

Tall and slender and with an elegant, aristocratic manner, he studied at France’s exclusive EcolePolytechnique and the National Administration School.

Aged just 18, he joined the French resistance in World War II and took part in the liberation of Paris from its Nazi occupiers in 1944. He then served for eight months in Germany and Austria.

He launched his political career in 1959, becoming finance minister in 1969.

After his defeat in 1981 — which he said left him with ‘frustration at a job unfinished’ — he remained active in centrist politics, first regaining a seat in the French parliament and then serving in the European parliament.

In 2001, he was selected by European leaders to lead work on the bloc’s constitutional treaty — which French voters then rejected.

After losing his legislative seat, he ended his active political career in 2004.

The death of Mitterrand in 1996 followed by that of his successor Chirac in 2019 had left Giscard as France’s oldest surviving leader by far.

In May 2020, French prosecutors opened an investigation after claims by a German reporter that he had repeatedly inappropriately touched her at his Paris office after an interview in 2018.

But Giscard strongly denied the allegations, describing them as ‘grotesque’.