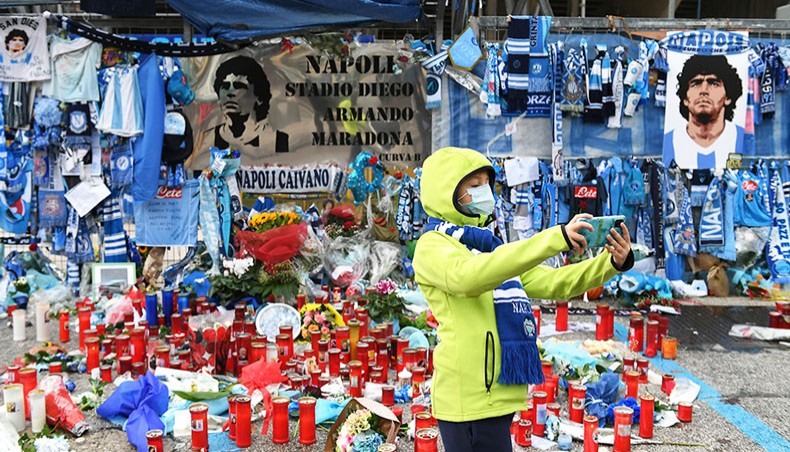 Tributes are paid to the deceased Diego Maradona outside the stadium prior to the Serie A match between SSC Napoli and AS Roma at Stadio San Paolo on November 29 in Naples, Italy. — Getty Images/Francesco Pecoraro

Death of a giant

MARADONA has died, and with him died one of the greatest football players of all time. Daniel, a manager at Ground Support, a legendary coffee house in Soho, Manhattan, expressed it well, ‘For us, soccer [football] fans, it is as if for the catholics the Pope would have died.’ In my travels around the world, I saw that he was the most popular sport player. Only in the United States, where football is not yet a very popular game, he was not as well known.

Maradona came from a very poor family, and he became a very rich man, but he wasted his fortune in alcohol and drugs. Although when he was a player he was in remarkable physical form, at the end of his life he became overweight and was plagued with several serious ailments. I believe, however, that very few people ever provoked the kind of universal admiration that he did.

The goals that changed football history

MARADONA will be always remembered for the extraordinary performance of Argentina against the British during the 1986 World Cup in Mexico, winning the final game against West Germany to become world champions. With his two goals against the British his legend was cemented forever. The notoriety of his first goal and the majesty of his second goal led the French newspaper L’Equipe to describe him as ‘half-angel, half-devil’.

Because he scored the first goal by striking the ball with his hand, it became known as ‘hand of God’. Although the goal was technically illegal, it stood, much to the disappointment and anger of the British players. Four minutes later, though, he scored the second goal, which was voted ‘goal of the century’ by FIFA, the international football organisation. His second goal was like a revenge from the first one.

After receiving the ball in his own half of the field, he swivelled around, ran more than half its length, and dribbled past five English players before leaving goalkeeper Peter Shilton on his backside and sending the ball into the net. Zinedine Zidane, who watched that game as a 14-year-old said that Maradona ‘was on another level’. The authorities of the Azteca Stadium, where the game took place, built a statue of him scoring the ‘goal of the century’ at the entrance to the stadium.

Jorge Valdano, Maradona’s teammate, gave his own point of view. ‘I saw Maradona catch the ball in our own field,’ said Valdano, ‘and I started running next to him, so that all the Brits’s attention wouldn’t be placed only on him. I saw astonished how he started dribbling the Brits one after the other, who were almost falling down like dominoes, such was Maradona’s diabolical speed. After he left their goalkeeper on his backside and scored the goal, Maradona started running towards his right, where he was being hugged effusively by our teammates. I, however, started going in the opposite direction. Spectators probably thought that I was going crazy. What happened, however, is that I felt that I had seen something magical, totally unprecedented, and I wanted to be another spectator and enjoy every minute of it.’

Maradona and the character of Argentines

MARADONA’S character reflects in a way Argentina’s history. It is like a parable of that country being among the most developed countries in the world during the first half of the twentieth century and now becoming a shadow of its former self. Likewise, Maradona went from being the best player in the world, in top physical form, and then becoming sick, a man defeated by drugs and alcohol. What drugs and alcohol were for Maradona, Peron and his populist policies were for Argentina, a country of enormous potential. For a short moment of pleasure, a long stretch of unhappiness and pain.

MARADONA’S influence extended beyond the football field into economics and history. In 2005, Lord Mervyn King wrote about how Maradona scored the two goals against England. The first one, according to Lord King, summed up the old ‘mystery and mystique’ approach to central banking. It was ‘unexpected, time inconsistent and against the rules’. As for the second goal, this is what Lord King said:

‘Maradona ran 60 yards from inside his own half beating five players before placing the ball in the English goal. The truly remarkable thing, however, is that, Maradona ran virtually in a straight line. How can you beat five players by running in a straight line? The answer is that the English defenders reacted to what they expected Maradona to do. Because they expected Maradona to move either left or right, he was able to go straight on.

‘Monetary policy works in a similar way. Market interest rates react to what the central bank is expected to do. In recent years the Bank of England and other central banks have experienced periods in which they have been able to influence the path of the economy without making large moves in official interest rates. They headed in a straight line for their goals. How was that possible? Because financial markets did not expect interest rates to remain constant. They expected that rates would move either up or down. Those expectations were sufficient — at times — to stabilise private spending while official rates in fact moved very little.’

In that context, the game between Argentina and England wasn’t simply one more game. It was the opportunity to get back at the British for the victory over the Malvinas. Argentina’s winning the world cup after defeating both the British and the Germans was the cherry that topped the cake.

Who is the best?

MARADONA is often placed with Pelé and Messi as the three best football players ever. However, of the three, Maradona is the only one who was able to carry the whole team on his shoulders. Proof of it? A player is as great as he can make his teammates play. When Pelé played, he had excellent teammates. And Messi was at his best when Andrés Iniesta and Xavi Hernández played in the same team.

Maradona, however, arrived in Naples to play with the local team Napoli in 1984. Prior to his arrival, Italian football had been dominated by teams from the north and the centre of the country. No team from the south had ever won a league title. With Maradona, Napoli won a series of national and international tournaments that made him to be considered a God for the Neapolitans, and a Maradonian Church was dedicated to him by his fans in Naples.

Nobody received as much adulation during life as Maradona did in his. And this probably contributed to his downfall. In his later years his health deteriorated, and he was involved in several legal battles. He remains, however, as the greatest football player of all time.