Gotabaya can achieve where other leaders failed 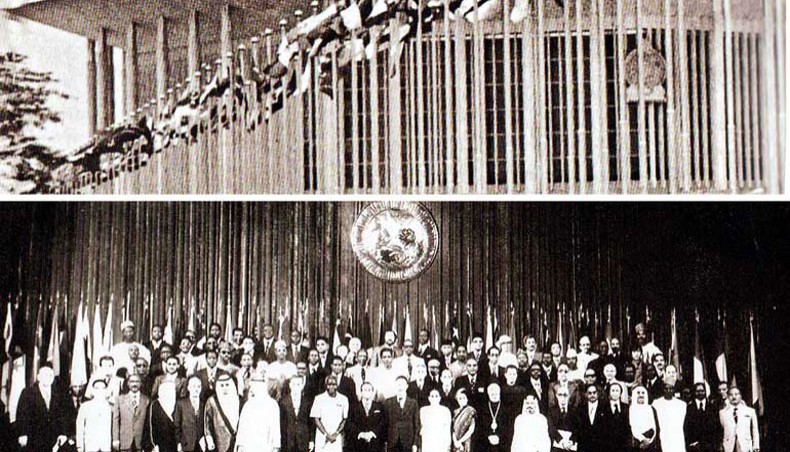 The fifth Non-Aligned Movement Conference in Colombo in 1976. — Web

DESPITE its small size Sri Lanka has occasionally been prominent on the world scene for both good reasons and bad. Sri Lanka gained much positive publicity for having the first woman prime minister Sirimavo Bandaranaike in 1960. This was one of the factors that helped Sri Lanka to host the non-aligned conference in 1976 which was attended by 86 heads of states or their representatives and enabled Sri Lanka to play a lead role on the international scene. In the decades of the 1960s and 1970s Sri Lanka was also known internationally as a model of a country that could provide its people with a relatively high quality of life on a relatively low income. At that time Sri Lanka had economic policies that emphasised income redistribution and subsidies that kept inequalities significantly lower than what they are today.

The area where Sri Lanka failed from the very beginning was in inter-community integration. This was due to the use of ethnic politics without concern for the common good in which the wellbeing of all was set as the ideal to be achieved. First it disenfranchised almost its entire Indian-origin Tamil population. Then it imposed an official language policy that belittled and marginalised Tamil speakers. These two divisive events set the ground for conflicts that have blocked the country from reaching its full potential and which it has still to overcome. Acts of mob violence, terrorism and finally years of brutal warfare brought Sri Lanka into an unfavourable limelight. Now today with its ban on the burial of COVID-19 victims and its policy of enforced cremations, Sri Lanka has become a source of unusual controversy as it goes against both science and religion. Sri Lanka is once again in an unfavourable spotlight.

At the outset of the COVID-19 pandemic the government took the position that COVID-19 burial is not permissible due to the threat to the health and safety of the larger population as it leads to the possibility of groundwater contamination. However, today, the government is reported to be willing to consider the burial of COVID-19 victims in specially located sites which would pose no risk of groundwater contamination. If there is no evidence for or against such contamination, then the prevailing law and practices relating to burial should continue as the course of justice. If proven otherwise, then the rationale would be to mitigate this in the larger interest of the society. By disregarding the strongly felt sentiments of a significant section of the population, and by being unfair to them, the government is risking the buildup of conflict in the future.

THE resolution of ethnic and religious conflicts that have taken root in society are very difficult to achieve without enlightened and credible leadership as witnessed worldwide, most notably in the last few years in the United States. This is part of the ‘clash of civilisations’ warned about by the American political scientist Samuel P Huntington. In 1992 he wrote that prior to the end of the Cold War, societies were divided by ideological differences, such as the struggle between democracy and communism. However, at the present time he argued that ‘the most important distinctions among peoples are [no longer] ideological, political, or economic. They are cultural.’

The speeding up of economic development by itself will not resolve the tensions and clashes that arise out of culture and identity. Even if they were, Sri Lanka will be very poorly situated to utilise this method of resolving its conflicts and COVID-19 and past loans have debilitated the economy. Therefore, the challenge that can be dealt with at this time is not so much the economy but getting the fundamentals of inter-community relations in place. This is a time when the country requires statesmanlike leaders. First and foremost, they need to be able to win the trust and confidence of their populations. Second, they need to have the sagacity to establish institutions that enable equal rights, equal protection and equal opportunity for all citizens irrespective of their ethnicity, religion or other cultural identity. Third, they need to have the strength of character and legal power to push through with their reforms.

The nearest that Sri Lanka came to having such a leader was Chandrika Bandaranaike Kumaratunga in 1994. She had a popular mandate for a political solution to the war from all communities, especially the Sinhalese majority. Her mandate of 62 per cent of the popular vote was the largest ever. Unfortunately, she faced an intractable obstacle in the Liberation Tigers of Tamil Eelam who spurned every offer of hers to settle for a political solution within the framework of a united Sri Lanka. As her government only had a simple majority in parliament, her political rivals denied her the legal power to translate the new constitution her team had drafted from being passed into law. Instead the draft constitution of 2000 which could have provided the solution ended up being literally set on fire in parliament.

IT IS said that hope springs eternal in the human breast. The first year anniversary of president Gotabaya Rajapaksa’s advent to politics has brought hope to a majority of Sri Lankans who voted for him. This is a hope that can be realised for all Sri Lankans. While those who campaigned for him did so on a nationalist platform, a large proportion of those who voted for the president did so because they wanted a strong and decisive leadership that gave priority to the national interest. Whenever those with extreme nationalist views have sought election on their own, they end up getting very few votes as the general population does not favour extremism. Echoing the more prevalent moderation in Sri Lankan society, the president stated in his inaugural address after winning the presidential election that while he was voted for by the Sinhalese Buddhist majority, he would be the president of all Sri Lankans.

Since winning the presidency, president Gotabaya Rajapaksa has frequently iterated that he will ensure justice and equal treatment to all sections of the people. In his address to the nation a fortnight ago the president said that ‘an administration that protects the rights of all citizens regardless of racial or religious differences will be established during my tenure.’ At the same time the Sinhalese Buddhist majority place their implicit trust in him on account of his leadership in defeating the LTTE which was once deemed an impossible task. President Rajapaksa has a solid base on which to reach out to the ethnic and religious minority communities while retaining the confidence of the majority community. He has the opportunity to accomplish what the great Sri Lankan political leaders of the past tried to accomplish, which is a consensual solution that meets the needs and aspirations of all sections of the polity.

The primary need for a new constitution would be to resolve the conflicts between the state and people and to afford to all citizens the equal protection of the laws. The contours of a new constitution for Sri Lanka are taking shape as the Experts Committee has renewed its call for further public representations and given till December 31 to do so. Following the passage of the 20th Amendment to the constitution that gives him sweeping powers, and which is backed by a two-third majority in parliament, the president also has the legal powers to implement any reform he wishes to put in place. Once again Sri Lanka stands at the edge of international limelight as it is set to be on the agenda of the UN Human Rights Council once again in March 2021 due to its withdrawal from the co-sponsored resolution of 2015. The progress towards a new constitution that will better reflect the country’s multi-ethnic, multi-religious, multi-lingual, multi-cultural and plural nature will stand the government in good stead and be a positive example to the world, like we were in the past.