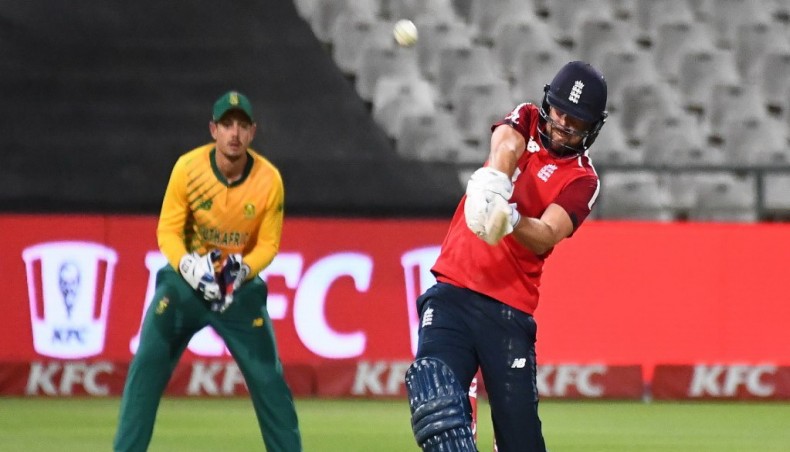 Dawid Malan and Jos Buttler launched a savage assault on South Africa's bowlers as England completed a series clean sweep with a nine-wicket win in the third and final Twenty20 international at Newlands in Cape Town on Tuesday.

Man of the series Malan finished on 99 not out, while Buttler was unbeaten on 67.

Rassie van der Dussen (74 not out) and Faf du Plessis (52 not out) set up South Africa's biggest total of the series in an unbeaten partnership of 127 off 66 balls for the fourth wicket.

But the left-handed Malan was quickly into his stride when he joined Buttler after the dismissal of Jason Roy. By the end, South Africa looked a demoralised team.

‘Those guys played unbelievable innings, they put our bowlers under a lot of pressure,’ admitted home captain and wicketkeeper Quinton de Kock, who fumbled a return from fielder Temba Bavuma when Malan, on 36, was well out of his ground.

‘It was nice to get a bit of momentum at the start,’ said Malan, who hit two fours and a six off the first four deliveries he faced. ‘The wicket played really well.’

England captain Eoin Morgan said the pitch had played far better than he expected at the toss, when he anticipated a low-scoring match. ‘To win in such commanding fashion builds a lot of confidence in the change room,’ he said.

England were always well up with the required rate but put themselves in total command in the 10th and 11th overs when they hit 21 and 19 runs off Lutho Sipamla and Tabraiz Shamsi respectively.

Sipamla, replacing the injured Kagiso Rabada and playing his first match of any type since the last South African season, was thrashed for 45 runs off 2.4 overs.

The teams meet in a three-match one-day international series, starting at the same venue on Friday.