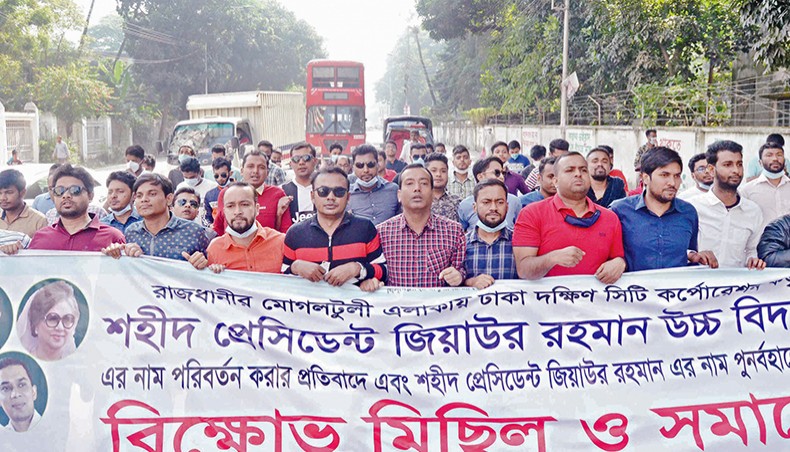 The Dhaka University branch of Bangladesh Jatiyatabadi Chhatra Dal brings out a procession on the campus on Tuesday protesting at changing the name of Ziaur Rahman High School. — New Age photo

Leaders and activists of the JCD’s Dhaka University unit, led by its convenor Rakibul Islam Rakib, brought out a procession in front of the Central Shaheed Minar in the morning.

They marched towards the university’s TSC area and held a rally at the base of Anti-Terrorism Raju Memorial Sculpture.

They demanded immediate reinstatement of the school’s original name.

The name of the school has been changed as ‘Mogaltuli High School’ by the corporation authorities.

Rakibul Islam said that the government could only erase Ziaur Rahman’s name from the nameplate of the school using their muscle power but it could never remove his name from people’s hearts.

‘The consequence of the illegal task will not be good. So, the government must reinstate Ziaur Rahman’s name immediately,’ he added.

Meanwhile, a faction of the JCD DU unit leaders, who failed to get any posts, also brought out another procession with the same demand on the DU campus.