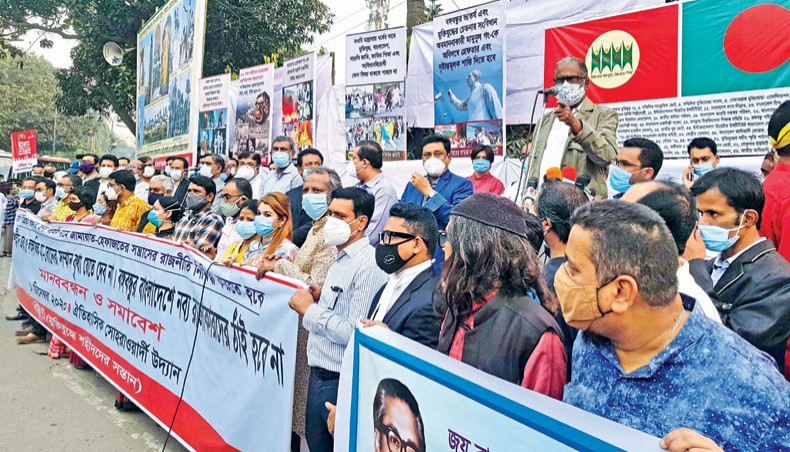 Different socio-cultural, political and professional organisations in Dhaka and elsewhere in the country on Tuesday demanded immediate arrest of Hefazat-e Islam’s amir Junaid Babunagari and joint secretary general Mamunul Haque for opposing the installation of the sculpture of the country’s founding president Sheikh Mujibur Rahman and their provocative remarks.

The organisations in their demonstrations also urged people to resist the quarters that threatened to demolish the sculpture of Mujib and to wipe out ‘secularism’ from the constitution and urged the government to impose a ban on extremist, sectarian politics of Jamaat-e-Islami and Hefazat-e-Islam.

They also demanded exemplary punishment for those spreading hate speeches against women, people of different opinions and faith in the name of waz mahfils.

They urged the people to uphold the secular spirit of the liberation war.

The organisations staged the demonstration in the backdrop of recent threat by Mamnul to wipe out Mujib’s sculpture if built in the city as planned by the Awami League government while Babunagari backed his statement.

In Dhaka, thousands of protesters of 65 organisations with the initiative of Ekatturer Gohatak Dalal Nirmul Committee thronged the surrounding areas of Suhrawardy Udyan in the afternoon to press home their demands.

The protesters carrying banners and placards reading their demands against extremist quarters and religion-based politics began a human chain around 2:30pm from Matsha Bhaban to Shahbagh intersection.

Within minutes, the human chain spread to the surrounding Suhrawardy Udyan.

Addressing the rally, liberation war affairs minister AKM Mozammel Haque said, ‘They should withdraw the statement opposing Bangabandhu’s sculpture. Otherwise, people who believe in the spirit of the liberation war will respond properly and there will be consequences.’

‘They are very fortunate as nothing had happened to them yet even after giving such statements about Bangabandhu in Mujib Year but they have to be ready for exemplary punishment,’ he added.

Awami League presidium member and former shipping minister Shajahan Khan said, the fanatics were misinterpreting the scripture and declaring the demolition of Sheikh Mujib’s sculpture in a display of arrogance.

Dhaka South City Corporation mayor Fazle Noor Tapash warned that the fundamentalist quarters of consequences and said that the people of the country would uphold the spirit of the liberation war at any cost.

The programme ended with placing wreaths at the Shikha Chirantan at the Udyan.

New Age staff correspondent in Sylhet reported that 11 cultural organisation activists formed a human chain in front of Central Shaheed Minar at Chowhatta in the city protesting against the opposition to installing sculpture of Sheikh Mujib.

Addressing a rally held during the human chain, the speakers demanded exemplary punishment of the persons involved in making the defamatory comments against the sculpture of Bangabandhu and the national constitution.

New Age correspondent in Rajshahi reported that freedom fighters, cultural, political, and social activists staged a demonstration in Rajshahi city demanding exemplary punishment of those who oppose the installation of the sculpture of Sheikh Mujib.

More than five hundred activists brought out a protest procession from Saheb Bazar Zero point area at around 4:00pm under the banner of Ekattorer Ghatak Dalal Nirmul Committee.

The leaders and activists of Rajshahi district and Paba upazila unit Jubo League brought out a protest procession at Nouhata area of the city protesting against the opposition to the installation of Bangabandhu’s sculpture.