Muslims v the west, in France and beyond 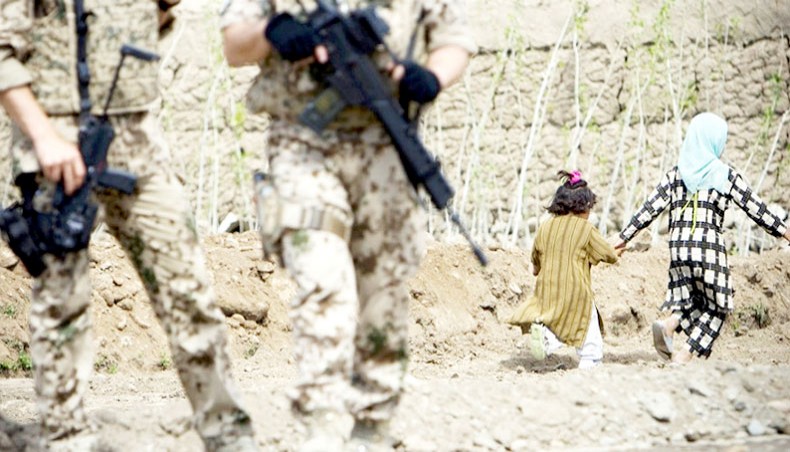 ISLAMOPHOBIA in the west has, in short, a dark history, which is all about the use and abuse of Islam and Muslims and is positively correlated with Islamist terrorism (the real ones and false-flag operations) and the so-called counterterrorism and counterinsurgency, which are multi-billion-dollar operations, mainly run by the military-industrial complex in the west. We know the military-industrial complex in the United States alone rob billions of dollars of taxpayers’ money, all in the name of defending the nation. Meanwhile, after the western occupation of Afghanistan, western troops had not only destroyed cities and hamlets and killed tens of thousands of innocent civilians since October 2001, but for a decade and a half, they had made multiple billion dollars from illicit poppy cultivation under the very nose of Anglo-American troops. Thus, one may argue, Islamophobia in the west has been the main chapter of the book on western ‘strategic communication’, or advanced planning and political warfare, against the Muslim world. Interestingly, neither the Desert Storm of Bush Sr and the war on terror by Bush Jr used Islamophobia to legitimise their illegitimate invasion of Iraq in 1991 and 2003.

The former justified his invasion in the name of ushering in a ‘new world order’, where invasions of one country by another — as Iraq did to Kuwait in 1990 — would not be tolerated any more. Instead of saying bad things about Islam, Bush Jr and his allies defended their illegitimate Iraq invasion by concocting stories about Iraq having some lethal ‘weapons of mass destruction’ to destroy the west and Israel. It is noteworthy that Bush Jr had always defended Islam as a ‘religion of peace’. This, however, does not mean that he and his allies had any love lost between themselves and Islam and its adherents. They directly attacked Iraq to ensure that no Muslim-majority country would pose an existential threat to Israel, or become too powerful to contain and control any resource-rich or strategically important country or region. As mentioned above, all wars are ‘trade wars’; so, Islamophobia is an ideology to justify wars against Muslims. And, as it happened in 1991 and 2003, both the senior and junior Bush successfully won their ‘trade wars’ without being explicitly Islamophobic out of sheer political expediency. Thus, Islamophobia is the last resort of many western powers, which are hell-bent to keep Muslim nations subservient and least dangerous to their neo-colonial interests. If they can subdue a Muslim nation or two without being publicly Islamophobic to remain politically correct, they resort to other ‘justifications’ to achieve their goals.

The hatred of Islam could be real or fake, depending on who is in command. While Bush Jr would not hesitate to bomb Muslim cities and hamlets asserting publicly that ‘Islam is a religion of peace’, Trump and Macron, on the other hand, prefer to demonise the religion and its adherents as ‘anti-west’ and ‘problems’. Last but not least, Macron’s portrayal of Islam as ‘a religion in crisis’ stirred up the Muslims so much that many Middle Eastern countries have started boycotting French goods, and president Erdogan of Turkey has expressed his doubts about the mental health of the French president (Nabila Ramdani of BBC on Macron’s Islamophobia etc. ‘A Religion in Crisis’, October 31st 2020).

‘The French government is not the champion of free speech that it likes to think it is. In 2019, a court convicted two men for “contempt” after they burnt an effigy depicting president Macron during a peaceful protest. Parliament is currently discussing a new law that criminalises the use of images of law enforcement officials on social media. It is hard to square this with the French authorities’ vigorous defence of the right to depict the Prophet Mohammed in cartoons.’

Finally, one cannot agree more with the Amnesty International that: ‘The right to freedom of expression also protects the ability to criticise the choice to depict religions in ways that may be perceived as stereotypical or offensive. Being opposed to the cartoons does not make one a ‘separatist’, a bigot or an ‘Islamist’.’ The renowned British defender of human rights and human dignity condemns the French administration for not allowing French Muslims to wear Islamic symbols or dress in schools or in public sector jobs. I fully agree with the Amnesty International that the French government’s ‘rhetoric on free speech is not enough to conceal its own shameless hypocrisy’. I believe, the French government’s using the expression ‘radicalisation’ as a euphemism for ‘devout Muslims’ is anything but freedom of expression.

We know there was nothing called Islamic or Islamist terror anywhere in the world before the 1990s, during the cold war, or ever before during the 1,400 years of Islamic history. Barring the terrorist activities of a section of the Ismaili Muslims (the Assassins, aka Hashishiya or Hashishiyyin in Arabic) during 1090 and 1275 (who killed Sunni Muslims), there never existed in history any terrorist group in the name of Islam, let alone sanctioned by the religion. The Qur’an in the most unambiguous terms denounce the killing of any innocent human being: ‘…whosoever kills a human being, except (as punishment) for murder or for spreading corruption in the land, it shall be like killing all humanity; and whosoever saves a life, saves the entire human race’ (Surah al Maidah, or Chapter 5:32). So, it is evident that whoever blames the Qur’an as a violent book, hence Islam as a violent faith, does so out of sheer ignorance or prejudice against Islam, which is plain and simple Islamophobia. Even the so-called ‘most violent’ verses in the Qur’an, from Surah al-Tauba or Chapter 9:4–6, are full of compassion for non-belligerent non-Muslims, instructing the Muslims not to harm or kill them. Thus, it is evident that all acts of demonising Islam and Muslims as violent or terroristic are politically motivated hate crimes to justify the subjection, marginalisation, and even the killing of Muslims in the name of peace, order, democracy, freedom, and whatever is convenient to do so by the Islamophobes (see Taj Hashmi, Global Jihad and America: The Hundred-Year War Beyond Iraq and Afghanistan, SAGE Publications, 2014, Ch 2, 3 & 4).

Although Islamophobia and ‘westophobia’ are primarily ‘trade wars’ in other names, yet people on both sides of the fence sadly think they hate and fight each other to defend their respective faiths, ways of life, culture, and civilisations. They are willing to kill and die for what they consider sacred and essential for their existence. Both are actually subject to elite manipulation, who somehow convince them, what Marx calls ‘false consciousness’, which is a pseudo-truth or blatant lie generated consciously by elite manipulators by establishing their ‘cultural hegemony’. This process of elite manipulation of the hoi polloi is much older than all known human history and civilisations. The west has been doing this against Islam and Muslims since the days of the Crusades, Reconquista in Spain in 1492, and the beginning of European colonisation of the Muslim world in general; and since the Iranian Revolution in 1979 and the First Gulf War in 1991, in the modern world. One may ask the question if Muslims are the worst killers and terrorists in history, in the last 500-odd years, how many unarmed and innocent civilians and children got killed at the hands of Muslims, and how many at the hands of the so-called ‘civilised’ people in the west. The answer would be less than 10 million and more than several hundred million, respectively. And, how many Muslims have so far joined the Islamist terrorist outfits in the last 30-odd years? Not more than five to 10 thousand out of a total of 1.8 billion Muslim population in the world, around 3,000 on 9/11. Then again, there are multiple ‘conspiracy theories’ or not-so-unconvincing arguments about who orchestrated the catastrophic 9/11, Muslims or somebody else.

Then again, the story about Islamophobia or hate crime against Muslims in the west and ‘westophobia’ of Muslims remain incomplete without highlighting the level of ignorance and intolerance among Muslims of all shades and colour. Thanks to the overpowering influence of the mullah — which includes all the different types of Islamic scholars, from famous madrassahs like Al Azhar and Deoband, from a mufti to a muhaddis (hadis scholar) or to an imam, Sufi and waez (Islamic speaker/demagogue) and others — the overwhelming majority of Muslims everywhere in the world (including those residing in the developed west) are ignorant about teachings of their scripture, the Qur’an, and almost totally rely on the problematic Hadis literature (which developed more than 200 years after the demise of Prophet Muhammad (PBUH), mainly based on hearsay and local traditions and Biblical stories, lies, and legends) narrated by the mullah. Thus, the overwhelming majority of Muslims are semi-literate, intolerant, and many are fanatical to the extreme. In short, most Muslims represent the poverty-stricken, backward people of the world. They are only comparable with Hindus and most people in Sub-Saharan Africa, who are equally backward and primitive. Hence, intolerant and superstitious. I give this account of Muslims to explain their level of intolerance. Anyone, they consider an enemy of Islam, or a blasphemer of Prophet Muhammad (PBUH), they believe must be killed. And, they have been killing so many so-called ‘enemies of Islam’ and ‘blasphemers’ of the religion, especially in countries like Pakistan, Saudi Arabia, Bangladesh, and even in their adopted homelands in the west. The recent killing of the French school teacher who showed a cartoon of Prophet Muhammad (PBUH) in his classroom is another example in this regard.

To conclude, I believe that as no Muslim has the right to kill anyone for one’s speech, writing, or ridiculous activities, such as burning down the Qur’an, drawing indecent pictures of Prophet Muhammad (PBUH), throwing pork into a mosque, or setting fire to or damaging/destroying mosques (à la the demolition of the Babri Mosque in India) as violent retaliation against blasphemers of Islam and Prophet are specifically forbidden in the Qur’an; similarly, those who publicly denigrate Islam and Muslims, and even discriminate against and physically attack them or even kill them are no different from the Nazis and anyone who is anti-Semitic and justifies the mass and sporadic killing of Jews in Germany, Russia, Poland and elsewhere. By the way, anti-Semitism is purely a European and Christian reconstruction, not an Islamic one, which is still around among white supremacists in North America, Europe and elsewhere.

Now, those who argue that since anti-Semitism is primarily racism, which is about hating the Semitic people or Jews this racial hatred and prejudice could lead to violent attacks and killings of Jews as it happened before, is a fallacy. Firstly, Arabs are also Semitic, and the expression has more to do with language than race and religion. Secondly, if hatred of a racial or linguistic group like the Semitics or Jews (as if Arabs are not Semitic) might lead to pogroms of Jews, or even another Holocaust, why on earth prejudice and hate against Muslims would not result in similar violent attacks on or mass killing of Muslims! I have argued above, a logical exposition to the whole issue of Islamophobia requires an immediate declaration of Islamophobia in any name and form be considered a hate crime as anti-Semitism is in 17 European countries. As I have cited above Evelin Gerda Lindner, who believes humiliation of an individual or a community often leads to terrorism, so it’s time to address the problem of Islamophobia which has already transformed some Muslims into terrorists, who are willing to die and kill avenging the humiliations of Islam, Prophet Muhammad (PBUH) and the Qur’an. Sooner Islamophobia becomes a hate crime or a criminal offence in countries where people hate Islam, the better.

Dr Taj Hashmi is an adjunct professor of criminal justice at Austin Peay State University in the United States. He is a historian, author, and analyst of global current affairs.