Rule of law to prevail over Trump attempts to derail election 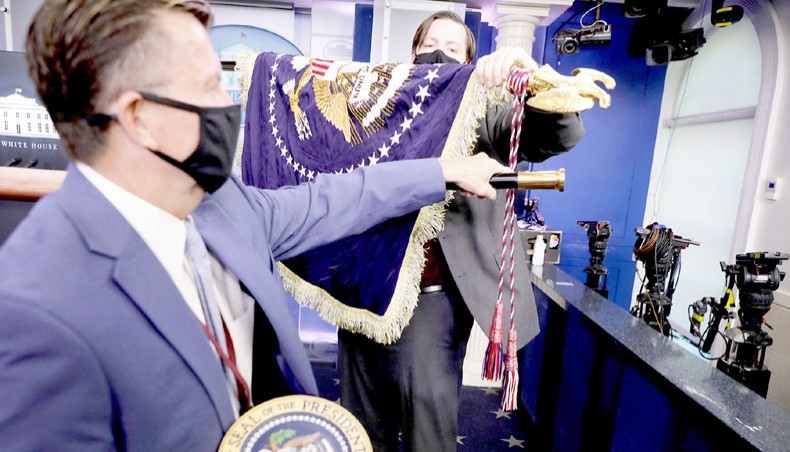 Members of the White House communications staff take down the presidential flag after US president Donald Trump made a brief statement to reporters in the James Brady Press Briefing Room at the White House on November 24 in Washington, DC. — Agence France-Presse/Getty Images/Chip Somodevilla

US PRESIDENT Trump met reporters formally at the White House on November 26, also Thanksgiving Day, for the first time since losing the presidential elections more than three weeks ago. He conceded during the event that if vice-president Joe Biden is named the president-elect at the meeting of the Electoral College on December 14, he would leave the White House. That concession was a fleeting one because, in the same breath, the president assured everyone that before that meeting of the Electoral College, he would bring a huge amount of evidence to establish that the election was rigged, subjected to massive fraud, irregularities, conspiracies, et cetera, to pave the way for his second term.

The president’s claims about the election make no sense, not any more. These claims are now like the claim of the emperor, in Hans Christian Anderson’s fairy tale ‘The Emperor’s New Clothes’, who said to his subjects that he was wearing the dress made of the finest linen in the world when in fact he was standing before them stark naked. The president’s lawyers filed cases galore in federal courts in the swing states of Pennsylvania, Wisconsin, Michigan, Georgia, Arizona, and Nevada to establish his false narratives about the election. The cases have been thrown out one after another because of zero evidence to establish the president’s claims.

Many of the judges at these federal courts were nominated to their positions by Republican presidents, some by President Trump. Some of them were so frustrated with the lack of evidence and/or the quality of the cases that the president’s lawyers led by Rudy Giuliani produced that they did not hide their feelings. Matthew Brann, the federal judge in Pennsylvania who overthrew a major case where the president’s lawyers wanted mail-in ballots to be declared illegal and unconstitutional said that the president’s case consisted of ‘strained legal arguments without merit and speculative accusations… a Frankenstein’s monster… haphazardly stitched together.’ Judge Brann is a Republican and a Federalist Society member in central Pennsylvania.

A panel of three judges of the US Courts of Appeal for the Third Circuit in Pennsylvania dealt the president’s legal strategy to a second term a fatal blow a day after his surreal press meeting at the White House on Thanksgiving Day. Judge Stephanos Bibas, one of the three judges in the case, wrote the following while dismissing the case: ‘Free, fair elections are the lifeblood of our democracy. Charges of unfairness are serious. But calling an election unfair does not make it so. Charges require specific allegations and then proof. We have neither here.’ Judge Bibas was nominated to the court by president Trump.

The present reality in Washington is the same as that around the emperor in the fairy tale. Everyone except those in the president’s base who follow him like a cult leader now knows without doubt that the president lost the election resoundingly and his claims to the contrary are false as the naked emperor’s claim that he was dressed in the best linen ever woven. People around the president in the White House have admitted to themselves that the president has been made to look like an ‘idiot’ by the manner his legal team pursued his false narratives about the election in the courts.

Between the president and Rudy Giuliani, they still harbour hopes of taking their case to the Supreme Court. They believe that the 6-3 conservative majority at SCOTUS would overturn the president’s resounding electoral defeat and send the all-important matter of electing the new Electoral College to the state legislatures where the Republican Party’s dominance would give the president victory on a silver platter.

There is a loophole in the US constitution for such a passage for the president, a passage never explored in history. Fareed Zakaria, in one of his episodes on CNN’s ‘Fareed Zakaria GPS’, brought this constitutional loophole to public attention before the election. He did not, however, consider or explain that SCOTUS would need evidence galore that a presidential election has been rigged, fraudulent, irregular, et cetera before disenfranchising the 161 million Americans who voted on November 3 to do what the president and Rudy Giuliani expected of them under the constitutional loophole. That is absurd. SCOTUS would have to turn itself into a kangaroo court of the worst kind to please the president.

Therefore, discussing president Trump in the context of his fate after January 20 when the president-elect Joe Biden would be inaugurated would be a waste of time. He knew it while claiming that he would have a second term at the White House press briefing. His performance at the White House press interview, therefore, was a master-class performance in acting; one for which he would have won an Oscar in the best actor category, effortlessly. He would have won Oscars also for best scriptwriting and direction because the horror tale that he forced Americans to watch since November 3 has also been scripted and directed by him.

The president lost the election on strategy, his against that of his opponent, both 100 per cent legal and constitutional and both driven by the pandemic. The president assessed though he did not admit it to his supporters that the pandemic would doom his chances. He, therefore, ignored it, called it a hoax, ridiculed masking, social distancing and convinced his supporters to do so. He encouraged them to vote in person in huge numbers. The vice-president knew the virus was dangerous and contagious. He encouraged his supporters, as his election strategy, to vote by mail or by absentee ballot that is not only constitutional and legal; it is as old as the country’s existence as an independent state.

The president adopted the in-person voting strategy with sinister motives for which he encouraged his supporters to risk their lives in the pandemic of the century that killed nearly a quarter-million Americans leading to the election day. He knew that in the critical swing states of Pennsylvania, Michigan, and Wisconsin, the in-person votes would be counted first under the electoral laws in those states and mail-in or absentee ballots afterwards. He thus knew that on election night, he would be leading his opponent by huge margins to demand, based on those leads, that he won the states that would give him victory.

That happened on election night. He, thus, came on the national media soon after midnight that night and demanded that the elections in those three critical states should be ‘called’ in his favour when he was leading in Pennsylvania by more than 700,00 votes and in Michigan and Wisconsin by huge margins. He stated that unless the elections were called in his favour, then the Democrats by fraud, forgery, conspiracy, etcetera would ‘drop’ votes in hundreds of thousands and ‘steal’ the election from him.

The media in general failed to pin the president down that his claims and accusations were misleading and that when the mail-in and absentee ballots would be counted, the results would change dramatically. The media also failed generally to explain that independent studies galore have established that mail-in or absentee ballots were free of any irregularities as much as in-person voting; the president’s preposterous claims to the contrary notwithstanding. For instance, the Brennan Centre of Justice in a report in 2017 stated that voter fraud in US elections overall is less than 0.0009 per cent fraudulent. The head of the Federal Election Commission Ellen Weintraub said that ‘there’s simply no basis for the conspiracy theory that voting by mail causes fraud.’

President Trump said during the campaign that he could not imagine losing. Now that he has lost, he has been doing everything in his power to cast doubts on the election and the victory of the president-elect Joe Biden. He did not care about the lives and sufferings of Americans, in particular his supporters, to win a second term. He acted like a third-world dictator to hold on to power. In the end, however, he shall fail because unlike a third-world dictator, he failed miserably in subordinating the country’s rule of law and the constitution to meet his fraudulent and illegal claims.

Postscript: In a telephone interview with Fox on Sunday, the president expressed doubt about his case ever going to the Supreme Court. It is perhaps his way of finally conceding defeat in the November 3 election.