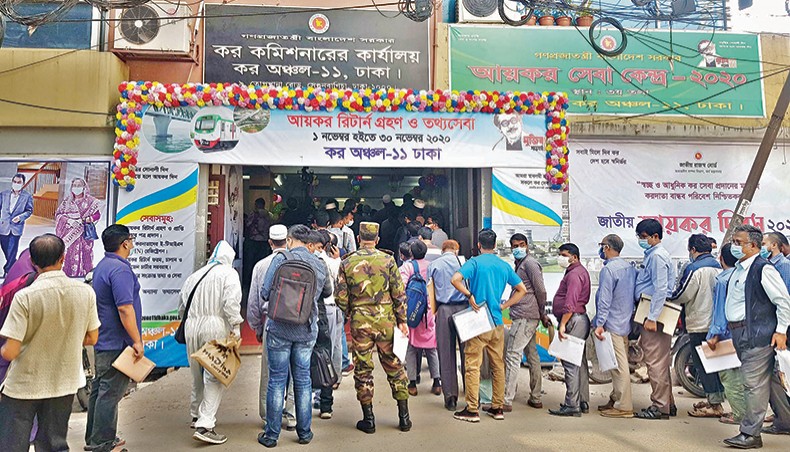 Taxpayers queue up to enter a tax office at Shegunbagicha in the capital, Dhaka, on Monday to submit their income tax returns. — New Age photo

The National Board of Revenue has extended the deadline for submission of income tax returns for individual taxpayers by one month till December 31 following a poor response from taxpayers in filing tax returns amid the coronavirus outbreak in the country.

‘Taxpayers now will be able to file their tax returns by December 31,’ NBR chairman Abu Hena Md Rahmatul Muneem said at a press briefing held in the capital on Monday.

The previous deadline for returns submission ended on Monday. The deadline usually ends on November 30 every year.

As of November 29, 15.04 lakh or 30 per cent of registered taxpayers filed their tax returns, according to NBR data.

There are 50.72 lakh electronic taxpayer identification number (TIN) holders in the country.

At the press briefing, Muneem said that taxpayers had been facing problems in filing tax returns due to the coronavirus outbreak while businesses, income tax practitioners and individual taxpayers had been demanding extension to the time limit.

He said that public representatives also recommended extension to the deadline for returns submission but the NBR was not sure whether the number of returns would increase if the deadline was extended.

‘But observing the last day’s trend in returns submission, we have felt that many taxpayers will face problem if the time is not extended,’ he said.

The number of returns so far submitted is also not up to the NBR expectation, Muneem said.

So, the NBR has extended the time for returns submission after approval from the government high-ups, he said.

According to a gazette notification issued by the income tax wing of the NBR, the time limit from November 30, also known as Tax Day, was extended as per article 184G of the Income Tax Ordinance-1984.

Officials said that no penalty or delay interest would be applicable in case of filing returns during the extended period.

Earlier on Sunday, Muneem at a press briefing said that the NBR would not extend the deadline which is set as November 30 in the Income Tax Ordinance-1984.

Blaming for waiting until the last moment for filing tax returns, he said that the deadline began July 1 and taxpayers got ample time for returns submission.

Earlier in the morning on the day, Muneem at a seminar organised on the occasion of Tax Day said that capital flight as well as tax avoidance would be thwarted through taking effective measures.

He also hinted at reviewing the tax measures for senior citizens above the age of 70 and having no income.