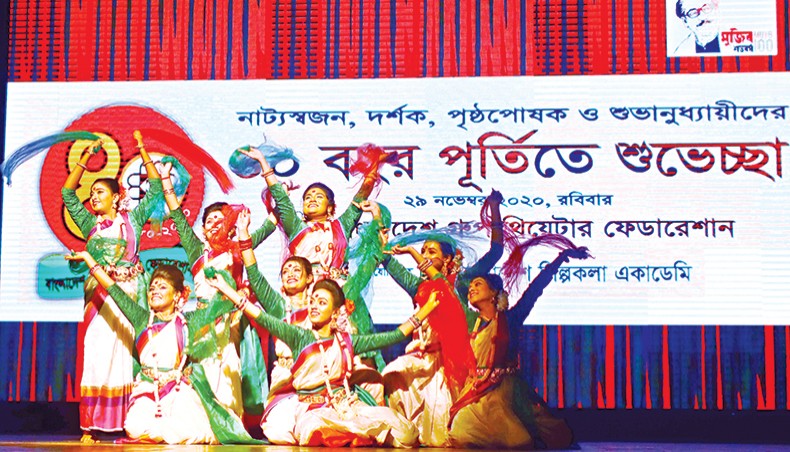 BGTF vice-president Lucky Enam presided over the event and BGTF secretary general Kamal Bayezid delivered the welcome speech at the programme, which was dedicated to the late eminent actor Aly Zaker.

‘We have been going through tough time due to the COVID-19 crisis. Many noted cultural activists have died from the disease till date. We have dedicated this year’s programme to the late eminent actor Aly Zaker. I thank all for attending our founding anniversary celebration programme amid the COVID-19 outbreak,’ said Kamal Bayezid.

‘COVID-19 has dealt a huge blow to our cultural arena. Bangladesh Group Theatre Federation has been working tirelessly to revive the local culture scene. I wish BGTF all the best in its future endeavours,’ said KM Khalid.

‘In 1980, a group of young theatre activists including Ramendu Majumdar, Ferdousi Majumdar, Mamunur Rashid, Ataur Rahman, Aly Zaker, Sadek Bachchu and others founded Bangladesh Group Theatre Federation with an aim to ensure the rights of theatre activists and promote theatre practices across the country. Though we are yet to establish professional theatre practice in the country, we have been raising our voices against social issues for decades,’ said Nasiruddin Yousuff.

‘Theatre is an integral part of our life. It gives us strength. This year we have been hit hard by the COVID-19 crisis. Many theatre troupes are struggling financially. BGTF has been helping theatre artistes alongside the government. I urge the government to increase financial assistance to theatre troupes so that they can navigate through the crisis,’ said Lucky Enam.