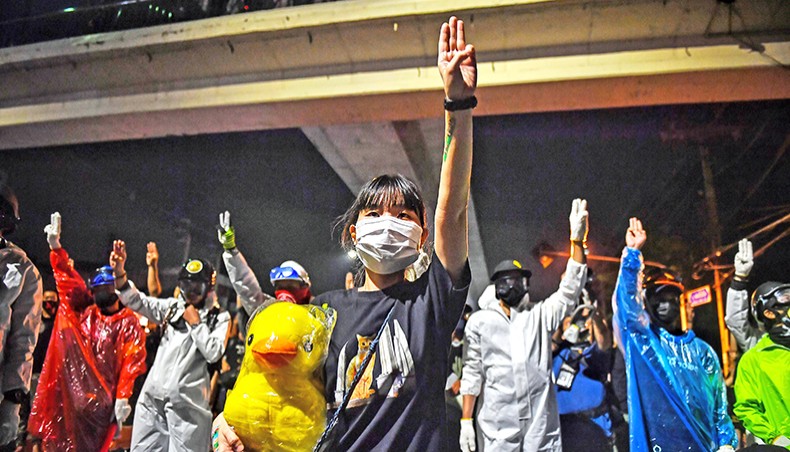 Pro-democracy protesters, including one carrying a stuffed toy duck, give the three-finger salute during an anti-government rally outside the 11th Infantry Regiment in Bangkok on Sunday. — AFP photo

Thai police charged five key leaders of the country’s pro-democracy protest movement Monday under the kingdom’s tough royal defamation laws, the first such use of the controversial legislation in two years.

Section 112 of the Thai penal code is one of the world’s toughest lese majeste laws, shielding the ultra-powerful King Maha Vajiralongkorn from criticism.

But in recent months leaders of the pro-democracy movement have called for reforms to the monarchy — including for the law’s abolition — a move that has sent shockwaves through Thai society.

Human rights activist Anon Numpa — one of the most prominent faces rallying for royal reform — and four others arrived at a Bangkok police station for questioning Monday.

‘The police charged us under section 112,’ Anon told reporters after leaving the station.

‘We have all denied it.’

They have been charged over over their role in a September rally, and if found guilty face up to 15 years in prison per charge.

They have led dozens of protests since July, the largest drawing tens of thousands supporting their demands.

They are also calling for a rewrite of the military-scripted constitution and the resignation of prime minister Prayut Chan-O-Cha, a former army chief who came to power in a coup in 2014.

Scores of protesters have been hit with sedition charges, while authorities have stepped up enforcement tactics in recent weeks — deploying water cannon and tear gas against unarmed demonstrators.

Leader Panupong ‘Mike’ Jadnok remained defiant Monday, saying that the 112 charge will not deter them from their goals.

‘I stand on our ideology... we will not be bound by the dictatorship and we do not accept section 112 as a law,’ he said.

The leaders were allowed to leave the police station after being questioned and charged by the police — a rarity as most lese majeste suspects tend to be held until trial.

The law has long drawn criticism from human rights activists, who say it is a tool deployed to suppress political dissent.

The use of it was stepped up after the 2014 coup, with legal rights group Thai Lawyers for Human Rights registering a jump from just six convictions to 169 under the junta.

The group has not recorded a charge since 2018.

Prayut had previously said the use of 112 slowed due to ‘the mercy’ of the king.

But after months of non-stop demonstrations, the embattled premier in mid-November gave the green light for authorities to lay royal defamation charges.