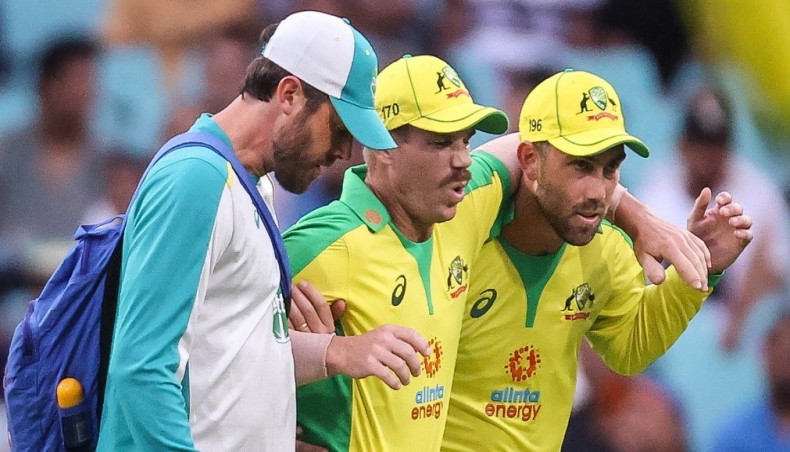 Australia's David Warner (C) is assisted by team mate Glenn Maxwell (R) and a trainer as he leaves the field after he suffered an injury during their second one-day cricket match against India at the Sydney Cricket Ground on Sunday.— AFP photo

Star opening batsman David Warner faces a battle to be fit for the India Test series after Cricket Australia said Monday he will miss the last one-day international and the three-match Twenty20 series next month.

Warner limped out of Sunday's one-day international against India after straining his groin while fielding as Australia secured the series 2-0 in Sydney.

After a typically swashbuckling innings of 83 on Sunday, Warner fell awkwardly and had to be helped from the field.

Warner will miss Wednesday's final ODI and all three Twenty20 internationals beginning Friday in Canberra to undergo rehab in an effort to ready for the Test series which begins on December 17 in Adelaide.

Opening batsman D'Arcy Short has been called up to the Twenty20 international squad as a replacement.

Cricket Australia also announced that leading pace bowler Pat Cummins will be rested for the remainder of the white-ball matches against India, putting pressure on an out-of-form Mitchell Starc.

‘Pat and Davie are critical to our plans for the Test Series,’ head coach Justin Langer said.

‘Davie will work through his injury rehab and in Pat's case it is important all of our players are managed well to keep them mentally and physically fit throughout what is a challenging summer.

‘The priority for both is being fully prepared for one of the biggest and most important home Test Series we have played in recent years, especially with World Test Championship points up for grabs.’

While Warner played an important role in Australia's ODI series win, the hosts have no shortage of talented batters who could replace him.

Rising star Will Pucovski is also waiting in the wings, with Test greats such as Michael Clarke, Ian Chappell and Mark Waugh all backing the 22-year-old's cause.

Marnus Labuschagne, who scored 70 in Sunday's ODI, said he was ready to move up the order into Warner's opening spot.

‘Certainly, if I got asked to open the batting, absolutely it's an opportunity that I would enjoy doing,’ Labuschagne told reporters Monday.

‘But we'll have to wait and see how our team shapes up and the balance of our side.’

No replacement has been announced for Cummins, with Australia to rely on Josh Hazelwood, Starc and allrounder Marcus Stoinis to provide the main seam bowling options.

Starc has struggled for form in the first two ODIs, and was Australia's most expensive bowler in the 51-run victory against India on Sunday, taking no wickets for 82 runs off nine overs.

Australia will play four Tests against India, with the other matches in Melbourne beginning on Boxing Day, Sydney (January 7-11) and Brisbane (January 15-19).

Labuschagne said the strong form of Warner and Steve Smith -- who scored back-to-back centuries in the first two ODIs -- was a promising sign for the Test series.

‘100 percent. Cricket's a massive confidence game and even though it's a different format it still gives you confidence when you score runs consistently,’ he said.

‘The way Steve and Davie have been batting I've got no doubt they'll be able to transfer that into the Test summer,’ he said.