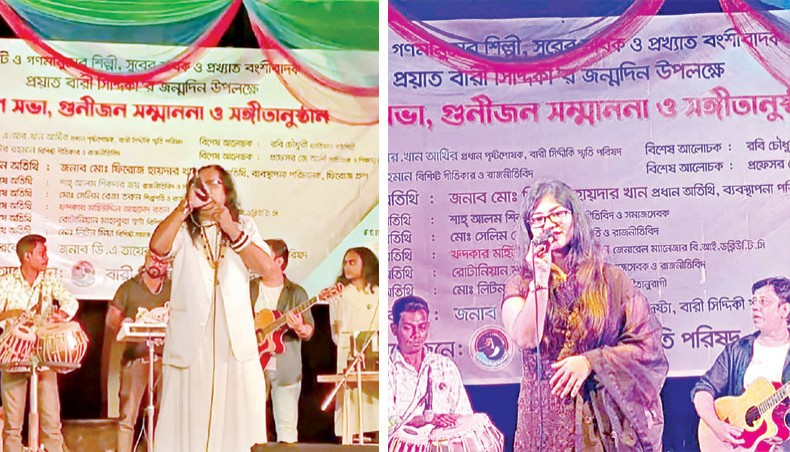 The late acclaimed singer and flautist Bari Siddiqui was remembered at a programme held at the Music and Dance Centre of Bangladesh Shilpakala Academy on Saturday.

‘Bari bhai was very close to me and we had visited many places together. I was greatly inspired by him. We have been celebrating his birth anniversary organising colourful programmes since 2017. We have also honoured a number of folk singers with Bari Siddiqui Smriti Padak till date. This year we honoured 20 folk singers with the award for their contribution to the country’s music arena,’ said Prince Alamgir, president of the Bari Siddiqui Smriti Parishad.

‘I am a big fan of Bari Siddiqui. His songs evoke serenity. I am honoured to be invited to today’s programme,’ said Firoz Haider.

Besides, leading singers rendered popular songs of Bari Siddiqui to the delight of the audience.

Bari Siddiqui was born on November 15, 1954. He was drawn to music at an early age. He received classical music lessons under Ustad Gopal Dutt, Ustad Aminur Rahman, Babir Khan and Pannalal Ghosh. He later developed passion for flute and trained under eminent classical flautist VG Karnad in Pune, India.

As a flautist, Siddiqui earned acclaim at both home and abroad. He performed in many countries including France, Switzerland, Malaysia, Pakistan, Iran and Singapore.

In 1999, Siddiqui came into limelight as a singer rendering playback numbers in Humayun Ahmed’s film Shraban Megher Din. All six songs, which Siddiqui sang for the film, received huge response. He promoted songs of many folk bards including Ukil Munshi, Chan Mia and others.