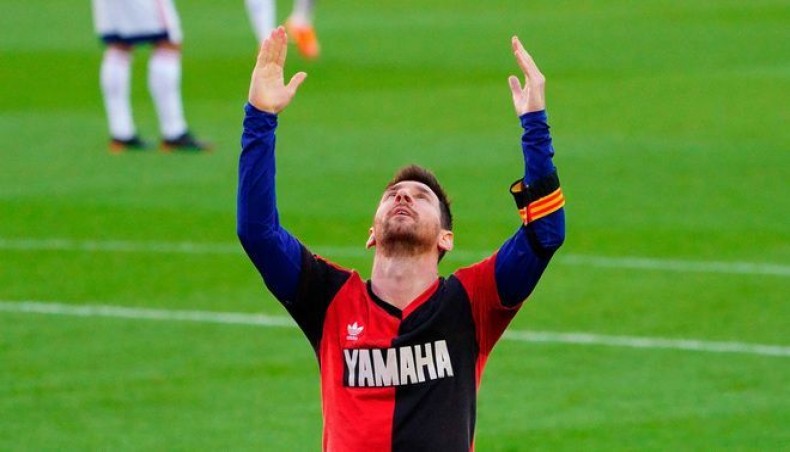 Clubs across Europe continued to pay tribute to Diego Maradona on Sunday with particularly poignant moments in Italy and Spain where the Argentine played.

Maradona, who played two seasons for Barca, one for Sevilla and spent seven mostly glorious years at Napoli, died on Wednesday aged 60.

Barcelona played on Sunday afternoon while Napoli held an elaborate and emotional tribute before their game in the evening.

Before Barcelona faced Osasuna, the club played 'The Song of the Birds' by Catalan cellist Pablo Casals as the teams stood around the centre circle where a Maradona shirt was laid on the centre spot.

Flags at the Camp Nou flew at half mast, Maradona's image was displayed on every screen and digital advertising hoarding, while a club official held a framed Maradona Barcelona shirt.

Messi got his goal in the 74th minute with a dazzling strike that sealed a 4-0 victory.

The Argentine picked up the ball in midfield, danced past two defenders and smashed a rising left-foot shot into the top far corner.

He celebrated by pulling off his Barcelona shirt to reveal a vintage Newell's Old Boys jersey from Maradona's one season with the club in Rosario, Argentina.

Earlier this week, Newell's tweeted a photograph from Maradona's debut showing a six-year-old local prodigy, in a similar black and red shirt, doing ball tricks for the crowd at half-time. That boy was Messi.

‘It was a great moment,’ said Koeman. ‘Leo's goal, his gesture dedicated to Maradona.

‘It was something very big. We Europeans don't realise how big Maradona is in Argentina.’

On Friday, Koeman said the best tribute his team could pay Maradona was to ‘show what we can do on the pitch’.

In Italy, in addition to the minute's silence, players stopped to applaud for 60 seconds as Maradona's picture appeared on the stadium screens in the 10th minute.

Maradona's former club Napoli thumped Roma 4-0 following a fitting tribute for the player who led the club to their only league titles in 1987 and 1990 and the UEFA Cup in 1989.

Napoli wore a jersey reminiscent of Argentina's for their first league game since his death.

The club said the launch had been in the works for the past year.

Captain Lorenzo Insigne, who curled in a free-kick after half an hour, celebrated his goal by holding up and kissing Maradona's iconic No. 10 shirt.

‘It's sure these days after Maradona's death have given us an extra boost, our idol has passed away and it hurts,’ said Insigne.

‘Today we wanted more than usual to perform and get a result, for him and for the whole city that is suffering. We dedicate the victory to him.’

The Stadio San Paolo is expected to soon be renamed after the 1986 World Cup winner following a suggestion made by the Mayor of Napoli.

In Rome, Lazio's players took to the pitch with special edition 'AD10S' jerseys in honour of Maradona but lost 3-1 to Udinese, for whom four Argentine-born players followed Koeman's advice.

Roberto Pereyra set up the first goal, then Rodrigo De Paul provided assists for the next two, scored by Ignacio Pussetto and Fernando Forestieri.

After his goal, Pussetto opened his hands wide, to form 10.

‘This victory is for him,’ said Forestieri. ‘After the goal I felt like crying. Diego was the greatest of all time.’

In Germany, Bundesliga clubs observed a minute's silence before games. In England, players applauded for a minute.