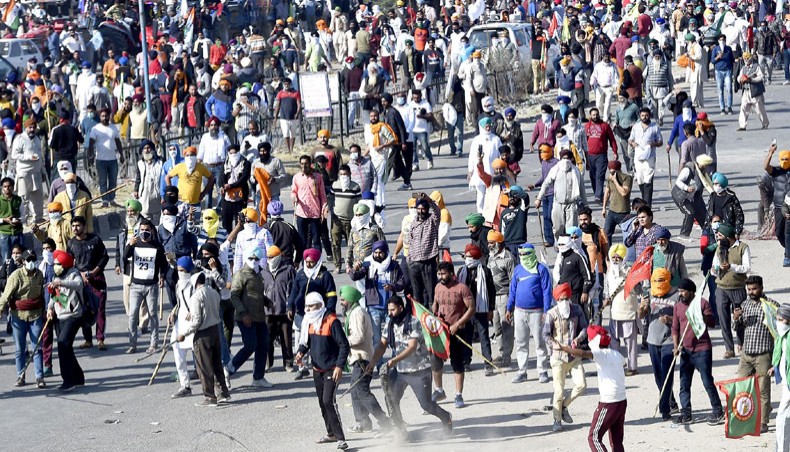 Farmers gather as they try to march to New Delhi to protest against the central government’s recent agricultural reforms at the Delhi-Haryana border in Kundli on November 27. — Agence France-Presse/Money Sharma

AFTER the protest against the Citizenship Amendment Act at Saheen Bagh in Delhi, the farmers’ protest is the second protest in Delhi that is currently underway in 2020. Thousands of farmers from Haryana and Punjab have marched towards Delhi to press the central government to repeal the recently enacted farm laws.

They are stopped at Haryana-Delhi border by the Delhi police using water cannons and lathi charge and are dissuaded from entering the national capital. But undeterred, the farmers have not stopped their march and have vowed to continue their agitation on the Delhi border, unless the government scraps the farm laws.

Remember, the anti-CAA protest at Saheen Bagh that erupted in a big way in January and February was of similar nature. Then the protests were held in a peaceful manner and were sustained by community leadership in which farmers from Punjab had some role to play. The anti-CAA protests abruptly ended without accomplishing the goal to force the government to roll back the citizenship laws. This was due to Delhi riots, coronavirus alarm and the national lockdown.

Now it remains to be seen how the farmers’ protest may play itself out in the current situation. The news amid the farmers’ protest is that some mosques in Delhi have opened community kitchens to provide food to the agitating farmers arriving from Punjab and other states.

These food kitchens are set up in Delhi mosques and the organisers have shared their numbers to farmers to contact them for free delivery of food. The organisers plan to do this activity as long as the situation demands.

It may be recalled that during the anti-CAA and anti-NRC protests in Delhi farmers from Punjab came to Delhi and stood by the side of the protesters running the community kitchen to sustain the protest. Now it looks that the anti-CAA protesters want to pay back the farmers by serving them with food that they did so many months ago.

What will be the role of BJP leader Kapil Mishra in removing the protesters? Everyone remembers his warning in which he wanted to clear the anti-CAA protests. And his role in the communal riots in Delhi that targeted Muslims. Will this BJP leader organise a 1984 programme against the farmer’s majority, with the protesters being the Sikhs.

Will the anti-CAA protesters spring up again in Delhi and join the farmers’ protest on the border and storm the national capital to press for their demands jointly?

If all this happens will the government allow it or try a Tiananmen Square solution? That remains to be seen. Also, how is the media going to report this story as all this happens? Will it side with the protesters or make their protests to be acts of sedition?

This is a powerful situation that is building up on the borders of the national capital. At the heart of the protest of the farmers is a test of people’s power v state power.

Syed Ali Mujtaba is a journalist based in Chennai.