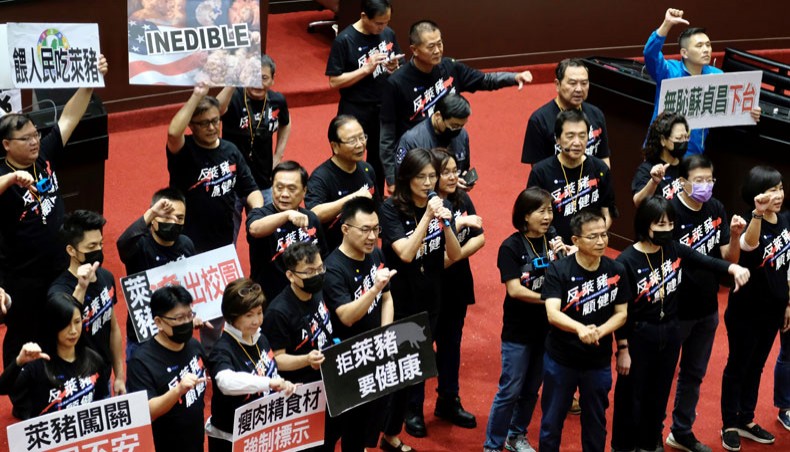 Legislators from the main opposition Kuomintang display placards reading ‘feed people with Ractopamine pork’ to ask prime minister Su Tseng-chang to step down during a demonstration at the Parliament in Taipei on November 27, 2020. — AFP Photo

Opposition lawmakers hurled pig organs inside Taiwan’s parliament on Friday to protest the government’s decision to ease restrictions on pork imports from the United States.

Lawmakers from the opposition Kuomintang party dumped buckets of pork offal on the debating chamber floor and then proceeded to hurl intestines, heart, liver and other organs at their rivals.

Taiwan’s government recently announced it would allow imports of US pork fed with the additive ractopamine from January 1.

The supplement improves leanness but is banned in places like the European Union and China.

Officials in Washington have made it clear restrictions on US pork and beef imports are a key stumbling block to the US and Taiwan signing a trade deal.

Taiwan’s president Tsai Ing-wen and her Democratic Progressive Party, which commands a strong majority in parliament, hope the easing of restrictions will pave the way for an agreement.

But many in Taiwan are opposed to US pork imports and the KMT have seized on the issue after a series of stinging electoral defeats.

Last weekend they joined tens of thousands in an annual labour rally, where opposition to pork imports was a major theme.

The DPP campaigned heavily against ractopamine when they were in opposition, and the KMT have accused them of hypocrisy.

The governing party now argues the additive is not a safety threat and that the deal will boost ties with the US, a valuable trading partner and strategic ally against China.

‘The opposition party has the right to protest, but they shouldn’t be wasting food,’ she wrote.