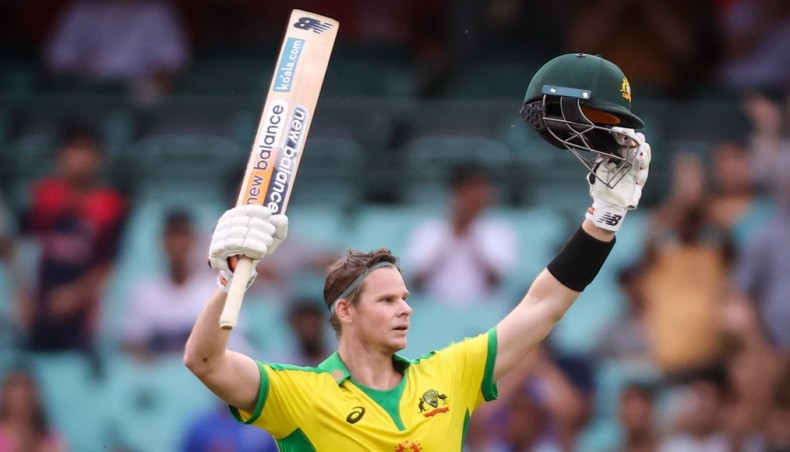 Australia's Steve Smith celebrates his century against India during their second one-day international match at the Sydney Cricket Ground in Sydney on Sunday. — AFP photo

Another pulsating Steve Smith century and two flying outfield catches clinched the one-day international series for Australia with a 51-run victory over India in Sydney on Sunday.

Smith tormented India with his second blistering hundred in as many matches as Australia posted another huge target, reaching 389-4 off 50 overs.

The Australians then restricted India to 338-9 from their 50 overs with Virat Kohli falling on 89 to a magnificent Moises Henriques catch when the master batsman was closing in on a century.

Smith followed up his 105 off 66 balls in Friday's first ODI victory with an equally dominant 104 off 64 balls as the Indians couldn't stem the runs on a slow-paced Sydney Cricket Ground pitch in searing conditions.

The total surpassed Australia's 374 for six which set up Friday's 66-run crushing win in the first ODI on the same ground and was the third-highest total scored against India.

‘I felt good from ball one. Got myself in and went hard,’ Smith said.

‘It was another great foundation set by Finchy and Davey (Warner). That enabled myself and Maxi (Glenn Maxwell) to go hard at the back end.’

It was India's fifth consecutive ODI defeat -- for the first time since January 2016 -- with the tourists now bidding to prevent a series whitewash in Wednesday's final game in Canberra.

‘They have outplayed us. We were ineffective with the ball, and didn't hit the areas,’ Kohli said.

‘They have a strong batting line-up, they know the conditions and the angles well.

‘The chase felt steep. They took the chances that they created in the field, which was the difference.’

Australia's win may have come at a cost, however, with David Warner injuring his groin in a fielding tumble and likely to be out for the next ODI -- and possibly the following T20 series.

Australia's top order made India pay after skipper Aaron Finch won his second toss of the series to subject the tourists to another afternoon of toil under a hot sun.

Smith put on a batting clinic with a full array of quirky shot-making as he raced to triple figures, laced with 14 fours and two sixes.

He fell two balls later stretching for a wide slower delivery off Hardik Pandya and getting a thick edge to Mohammed Shami at third man.

Finch and Warner brought up their 12th century opening stand off 16 overs before Finch mistimed Shami and spooned a catch to Kohli via his pads.

Warner chanced his luck on 83 but was run out by a brilliant direct throw from Shreyas Iyer at long-off.

India lost Shikhar Dhawan in the eighth over of their innings when he miscued Josh Hazlewood and was caught by Mitchell Starc for 30 off 23 balls, and fellow opener Mayank Agarwal went in the next over.

Pat Cummins had Agarwal caught behind for 28 off 26 to leave India 60 for two and a sensational catch by Smith at mid-wicket ended Iyer's knock of 38, giving Moises Henriques a wicket.

Henriques proved Australia's hero with his athletic horizontal catch to dismiss Kohli off Hazlewood for the prized wicket in the 35th over.

KL Rahul hit an enterprising 76 off 66 balls before he sliced leg-spinner Adam Zampa high to Hazlewood at short third man in the 44th over.