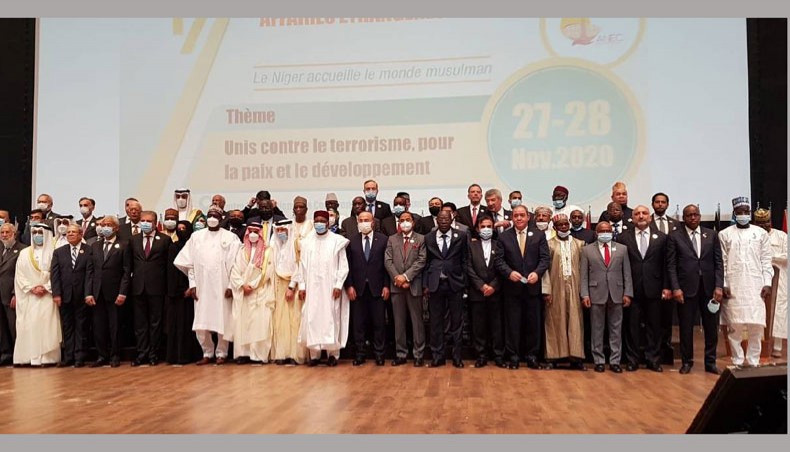 Participants pose for a photo session at the 47th session of the Islamic Council of Foreign Ministers in Niamey, Niger on Saturday. — UNB Photo

Bangladesh has urged the OIC member States to continue political and humanitarian support to Bangladesh until dignified repatriation of Rohingyas to Myanmar is ensured.

Bangladesh’s Permanent Representative to Organisation of Islamic Cooperation and Bangladesh ambassador to Saudi Arabia Mohammad Javed Patwary made the call at the 47th session of the Islamic Council of Foreign Ministers in Niamey, Niger on Saturday.

Foreign minister AK Abdul Momen was supposed to lead the Bangladesh delegation at the meeting but his visit was cancelled as he had tested positive for COVID-19 hours before his departure.

The meeting discussed various issues including ways for supporting the Rohingya case at the International Court of Justice, according to Bangladesh Embassy in Riyadh.

The Gambia filed a more than 500-page Memorial, which also includes more than 5000 pages of supporting material, in its lawsuit against Myanmar at the ICJ in The Hague, making its case for how the Government of Myanmar is responsible for genocide against Rohingya.

In November 2019, The Gambia opened a case at the ICJ, also known as the World Court, against Myanmar for failing to prevent or punish genocide against Rohingya Muslims.

On January 23, 2020, the ICJ unanimously indicated legally binding provisional measures, requiring the Government of Myanmar to take all steps within its power to prevent the commission of all acts of genocide, such as killing, causing serious mental or bodily harm, and other acts listed in the Genocide Convention.

The OIC CFM was opened on Friday by Mahamadou Issoufou, president of the Republic of Niger, who affirmed that the Organisation of Islamic Cooperation is important to its member states, and that his country plays an active role in the organisation.

On his part, Al-Othaimeen said that the choice of the theme for the session, ‘United against Terrorism for Peace and Development’, is a strong reminder that ‘terrorism is the single most serious threat to the region and the world, given its negative impact on growth rates and cooperation ties, in addition to worsening Human Development Indices ranking.’

He also valued the role assigned to the OIC Sawt al-Hikma Centre, which acts in coordination with the International Islamic Fiqh Academy to bring reason to bear and promote moderation and tolerance.

He extended his appreciation to all African member states for their keen involvement and support of the work led by the OIC.

Al-Othaimeen also commended the dedicated efforts the United Arab Emirates (UAE) exerted during its tenure, as the Chair of the esteemed Council’s 46th session, and the efforts the Kingdom of Saudi Arabia deploys in its capacity as the host country of the OIC and chair of the 14th Islamic Summit.

He expressed his deepest gratitude and appreciation for the care and attention given to the Organization’s activities in their entirety, under the patronage of the Custodian of the Two Holy Mosques, King Salman bin Abdulaziz Al Saud, and His Crown Prince and Deputy Prime Minister Mohammed bin Salman, may they be under Allah’s protection forever.

Prince Faisal bin Farhan Al Saud, the Foreign Minister of the Kingdom of Saudi Arabia, and its representative as Chair of the Islamic Summit, said that the Kingdom has donated a piece of land for the construction of the permanent building of the OIC General Secretariat.

Reem Al Hashimy, Minister of State for International Cooperation in the UAE, delivered a speech where she referred to the activities that Abu Dhabi carried out during its chairmanship of the 46th Session of the ICFM, noting that her country has learned from the Organization the importance of advancement in diverse issues.

Al-Hashemy handed over the chairmanship of the Council to the Foreign Minister of the Republic of the Niger.

Speeches were also delivered by the foreign ministers of Tunisia, Senegal, Turkey, on behalf of the Arab, African and Asian groups, in addition to the speech of the African Union, the guest of this Session.