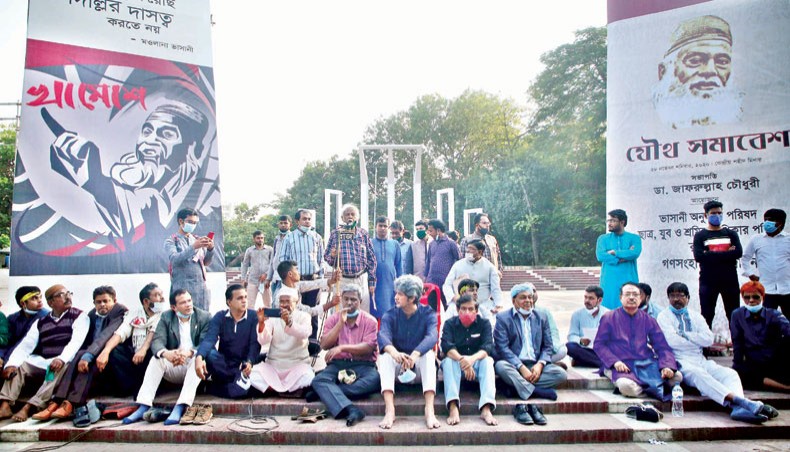 Leaders of four political and social organisations at a joint rally in Dhaka on Friday called on all democratic forces to be united for waging united movements for restoration of democratic rule in the country.

Bhashani Onusari Parishad general secretary Reshedul Islam Bablu read out the declaration of the rally, saying that the Awami League government had failed to fulfil aspirations of the people and initiated a ‘fascist rule’ in the country.

The Awami League also captured the voting rights of the people and is continuing with its misrule in the country, the declaration mentioned.

So, the government should immediately step down from power and give a free and fair general election under a neutral government for restoration of democratic rule in the country, the declaration demanded.

The declaration also demanded radical changes to the ruling system and also reforms of the constitution of the country.

to resign from power.

Zafrullah Chowdhury said that the Awami League had no moral right to continue their ‘misrule’ and it would be compelled to step down from power facing movements of people.

He called on the government to stop repression on the people.

Ganasomhati Andolan chief coordinator Zonayed Saki said that the Awami League government was leading the future of the country towards a dangerous position.

He called on the government to step down immediately for restoration of democratic rule in the country.

‘We also want proper implementation of the spirits of the war of independence in 1971,’ Nur said.

Rastra Chinta central leader Hasnat Quayum said that during the Awami League rule the country was engulfed in corruptions.

Several hundred leaders and activists of the organisations attended the programme that ended with a procession.