Virus hogs centrestage as Greece’s theatres wait in the wings 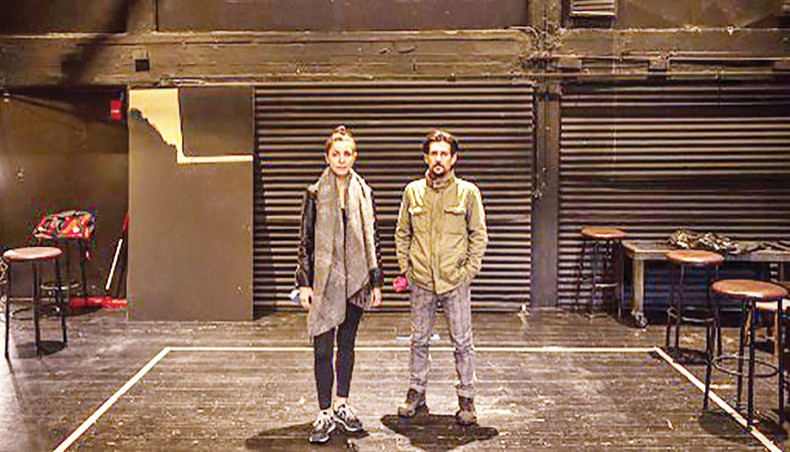 Administrators of Rabbithole theatre Yorgos Simonas (R) and Tonia Ralli (L) pose for a photograph inside the closed theatre in Athens on November 18, 2020. — AFP photo

‘Obviously very few will survive,’ says actor Yiannis Yiaramazidis, staring at the empty stage of the small theatre where he works in downtown Athens.

With small theatres and cinemas closed, concert halls dark, and tours and premieres cancelled because of coronavirus restrictions, Greece’s live entertainment scene, already weakened by a decade-long economic crisis, is walking a tightrope.

Yiaramazidis, 36, is particularly worried about new regulations brought on by the pandemic such as one allowing producers to not pay actors for rehearsals.

He is no stranger to job insecurity, as his income from acting was already not enough to make ends meet before the pandemic, and he always supplemented it with part-time work.

‘This will now become the new standard,’ says Yiaramazidis after rehearsing his part in a play based on a Franz Kafka novel under the direction of Savvas Stroumpos.

The troupe hopes to be able to return to the stage in March, but the only way to achieve this goal is to rehearse one by one -- a ‘very weird’ situation, says Yiaramazidis as he gathers his things to make way for the next actor.

The system is preferable to rehearsal by video link, says Stroumpos, who has also modified some scenes that required close contact between the actors.

His Attis theatre can accommodate an audience of only a couple of dozen people, so the new restrictions are a heavy burden.

While the performing arts are suffering across Europe and beyond, they are especially hard hit in Greece, with its economy dominated by micro-businesses.

The live entertainment scene is one of myriad mini-theatres like the Attis and small independent concert halls.

Many may have to bow out for good.

‘The majority of our members are struggling to survive, either because they have not received any state aid, or because this is too little anyway,’ Kostas Stavropoulos, secretary of the Panhellenic Music Association, told AFP.

A regular pay cheque is a rarity for Greece’s performers, who have been underpaid and often without insurance for decades because of the country’s grinding financial crisis.

Without a regulated labour framework since the country’s series of EU bailouts -- three between 2008 and 2015 -- many artists were left in limbo when the coronavirus pandemic broke out, invisible to the state and ineligible for financial aid.

‘The situation is deteriorating day by day and things will be worse when the confinement ends,’ Stavropoulos says. After the first lockdown, hundreds of venues were wiped out and those that were able to reopen did so under precarious working conditions.

Culture Minister Lina Mendoni told parliament that it was impossible for some artists to get state aid as many work in the ‘shadow economy’.

Anna Lianopoulou, a 34-year-old actress and dancer, is struggling to survive on monthly unemployment benefit of 360 euros ($430) after her contract was not renewed in May.

‘What makes me furious is that the government has done nothing to prepare us for a second wave’, she says. ‘All that interested them was to reopen to tourism. For art, there was no plan.’

Small cinemas are also suffering under the renewed lockdown, says Phaidon Moustakas. His cinema in central Athens reopened for just three weeks, selling around 20 tickets, before it had to shut down again early this month.

‘The very concept of choosing to watch a film in a closed cinema will become very fragile, even when we return to normality,’ he warns.

But Stroumpos is more sanguine about the future, saying he is ‘absolutely convinced that people will go back to the theatre’.