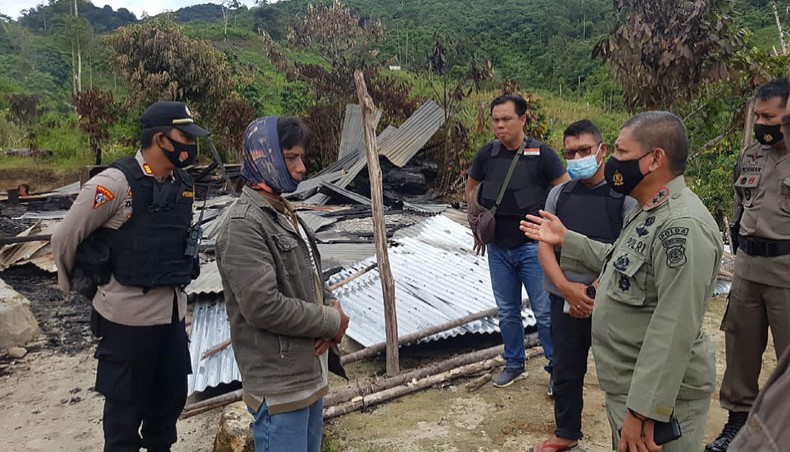 This handout photo taken and released on November 28, 2020, by the Central Sulawesi Province Police shows police officers inspect the site of an attack, believed to be by Islamic State-linked extremists, that killed four people in a remote Christian community of Lembantongoa village, in Palu on the Indonesian island of Sulawesi. — AFP Photo

Islamic State-linked extremists killed four people in a remote Christian community on the Indonesian island of Sulawesi, authorities said Saturday, with one victim beheaded and another burned to death.

No arrests had yet been made and the motive for the attack was not immediately clear.

But authorities pointed the finger at the Sulawesi-based East Indonesia Mujahideen, one of dozens of radical groups across the Southeast Asian archipelago that have pledged allegiance to IS.

Indonesia, the world’s biggest Muslim majority nation, has long wrestled with Islamist militancy and terror attacks, while Central Sulawesi has seen intermittent violence between Christians and Muslims for decades.

‘We reached the conclusion that they (the attackers) were from MIT after showing pictures of its members to relatives of the victims’ who witnessed the ambush, said Sigi Regency police chief Yoga Priyahutama.

The makeshift church was empty at the time of the early morning attack by around eight militants, he added.

‘People were just in their homes when it happened,’ Priyahutama said.

Lembantongoa village head Rifai, who like many Indonesians goes by one name, said one victim was beheaded and another was nearly decapitated.

One of the other all-male victims was stabbed while a fourth was burned to death in his home, he added.

‘Some residents managed to escape, but the victims didn’t make it,’ Rifai told AFP.

Indonesia’s Christians have been targeted in the past, including in 2018 when IS-linked group Jamaah Ansharut Daulah staged a wave of suicide bombings by families—including young children—at churches in the country’s second-biggest city Surabaya, killing a dozen congregants.

If confirmed to be the work of MIT, Friday’s killings would be its first significant attack since the organisation’s leader was killed four years ago by Indonesia’s elite anti-terror squad, according to Jakarta-based terrorism expert Sidney Jones.

‘Through the attack... they want to show that police efforts to arrest and kill members of the group did not have any effect on’ them, she said.

In 2018, MIT was believed to have sent radicals posing as humanitarian workers into Central Sulawesi’s quake-tsunami hit Palu city in a bid to recruit new members, Jones said.