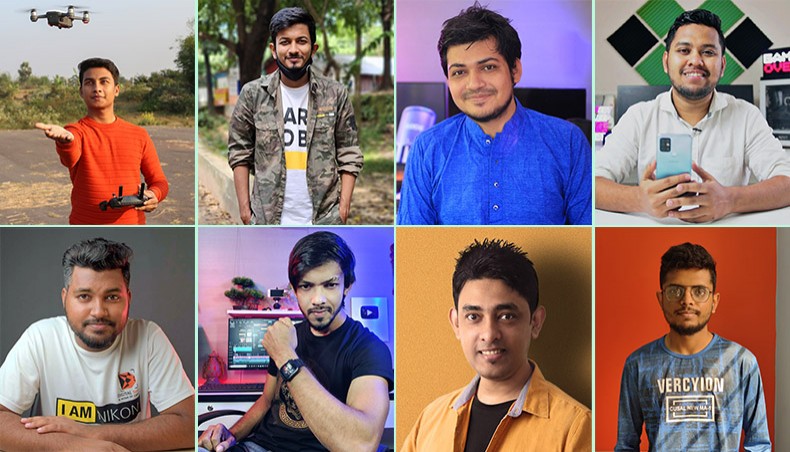 Techtuber has become a buzzword among the Gen Z peoples. A number of young minds in Bangladesh started sharing tech videos, particularly tech product reviews, after 2014 and many of them have taken it as a full-time profession. Talking with the content creators, Nasir Uz Zaman writes about their channels and works

Generation Z, the digital natives born after the widespread adoption of digital technology and grew up in a technological environment in which IT gadgets are part and parcel of everyday life. The rapid growth of IT industry has contributed to this social transformation and provided the consumers with many choices to pick their preferred gadget.

Young buyers spend a lot of time before buying an android or apple phone. YouTube tech reviewers play role in this process. After 2014, a number of young minds in Bangladesh started joining YouTube, one of the top video sharing platforms, to talk about the tech topics in Bengali language, particularly reviewing the tech products.

Within a couple of years, Bangladesh saw a sharp rise in the number of Bangladeshi tech YouTubers — techtubers. To name some popular Bangladeshi tech YouTube channels which are creating informative and interesting tech product reviews are — Sohag360, ATC Android ToTo Company, RealTech Master, ARK TECH, Ratul Osman, SamZone, Tech to the Point – TTP, techverse and many more. Some of the content creators also took it as a full-time profession as it is becoming a reliable income source day by day.

New Age Youth has talked with these popular tech reviewers and all of them have marked a point that tech reviewers must have to be responsible before reviewing a product and the reviews should be from the consumers’ point of views not from the brands’ end.

Sohag360 is one of the oldest and popular Bangladeshi YouTube channel under science and technology category, particularly known for technological product reviews. Sohag Mia started the channel in 2014 with tutorial videos but later, he began reviewing tech products and gadgets responding to the demand of his subscribers. The channel has more then 10,90,000 subscribers and 4,85,39,733 views. The tech enthusiast was a blogger and wrote several tech articles during 2010 to 2014 before joining the video sharing platform. The tech reviewer who is also interested in making tutorial contents has created another channel, only dedicated for tutorial videos, titled Basic Bhai in August 2020, already has more than 23,000 subscribers. Though the maximum video contents of Sohag360 are mobile phone reviews but viewers also get gadget reviews, laptop reviews, device comparisons and the latest smartphone unboxing videos. Till today, the channel has 244 video contents for the viewers.

ATC Android ToTo Company is one of the most popular YouTube channels for the latest smartphone review in Bangladesh. A team of android lovers created the channel in 2015 when they were students of class IX and X. During that time, the hype of android mobile phones was just gaining momentum and the android mobile market was growing. ATC Android ToTo Company team members — content creator Ashikur Rahman Tushar, videographer Rafid Islam, host and video editor Ariful Islam Emon, video editor Tanvir Evan and social media manager Nur Mohammad have successfully created 560 videos. The videos have reached more then 13,09,61,325 views and the channel has gained 12,10,000 subscribers. The Bangladesh-based ATC channel focuses mostly on smartphones and tends to offer some interesting reviews on the most anticipated mobile phones and gadgets.

RealTech Master is another well liked Bengali language based tech YouTube channel in Bangladesh. Since January 2017, content creator Mahafuj Alam is working to provide videos about different topics of today’s digital world. RealTech Master has several smartphone and gadget reviews but the channel is not limited to that only. Beside the reviews, the channel covers a vast area of digital or technological topics from the perspective of Bangladesh. Some of the popular topics of the channel are the information about different bank accounts, driving licence, e-passport, mobile banking and so on. The popular and informative tech channel consists of around 6,22,000 subscribers and 909 videos in total. Some unique sets of videos in the channel are the series of ‘RealTech Master Tips’, ‘PC House’ and ‘Software Reviews’. The platform with more than 3,98,60,000 views is ready to provide you information and solutions about new technologies and gadgets. If you have a question starting with ‘how to’, RealTech Master might be a place to get the answer.

The main difference between a review and advertise is that people will be said only about the pros of the product in advertises. But in a review, there should be pros and cons about the product. With the aim to reveal both sides of a tech product, Arifur Rahman Khan Himel created ARK TECH in January 2017. The tech channel has reached about 73,200 subscribers and it has 177 videos. If you are searching a tech product in a budget, ARK TECH’s ‘Best in this Budget’ series might help you to take a decision. Beside the series, there are also comparison videos, smartphone impressions, unboxing videos, tech brief, weekly tech updates and so on. The channel has crossed 33,24,000 views already.

The tech YouTube channel titled Ratul Osman is Ratul Osman’s second channel in Bengali language. Before this one, the tech reviewer had another channel titled TechrAtz where he created contents in English language. In April 2018, Ratul decided to create his videos in Bengali language as he found less tech video contents in Bangla. Better responses in his Bengali contents inspired him to continue his works. Today, the channel Ratul Osman has more than 2,09,000 subscribers and 1,42,70,000 views. The 244 videos of the tech channel includes tech gear reviews, like smartphones, smartwatches, cameras, sound equipment et cetera and also some talks about mobile apps.

You have searched for a smartphone review in Bengali language but you have not seen a video in the SamZone channel — it is quite hard to believe. SamZone is also one of the most popular smartphone review channel in Bangladesh which started its journey in July 2018. Beside smartphone review, you will also get gadget reviews, smartphone and tech tips, tech tutorials and do it yourself videos. A unique feature of the channel is its regular tech news segment. On every Sunday, the channel uploads weekly tech news. With 587 videos, the channel has reached about 6,12,000 subscribers and 3,68,14,000 views. The tech content creator of SamZone loves to make videos on do it yourself, popularly known as DIY videos. In June 2020, Sam started another YouTube channel named SamZone DIY which is dedicated for only DIY videos.

Tech to the Point – TTP

Academically groomed in different area and living in a dissimilar professional sector, tech geek Wahidur Rahman decided to do what he loves to do. And the result is Tech to the Point – TTP, a well admired tech YouTube channel in Bangladesh. Since July 2018, the tech channel has shared 177 video contents and gained about 3,99,000 subscribers and 1,77,58,000 views. Like other tech reviewing channels, Tech to the Point – TTP also has a number of smartphone reviews, smart watch reviews, headphone reviews, gadget reviews, tips and tricks, mobile application reviews and many more. But the uniqueness of the content exists in the presentation of the videos. Influenced by several tech reviewer, Wahidur loves to experiment with his content presentation in a humorous way.

In the list, the last channel is the techverse. But it is one of the most rapidly growing YouTube tech channels in Bangladesh. With five years of tech reviewing experience, Akib Raj created his own channel — techverse in January 2020. Though his studio setup has not been completed yet and has only 71 video contents but he has already reached more than 86,900 subscribers and 32,96,000 views. Akib’s video content includes smartphone reviews, gadget reviews, unboxing and first impression videos, comparison videos and tech news. Though most of the techverse contents are yet smartphone reviews but Akib has plans to widen the area and diversify his contents categories.