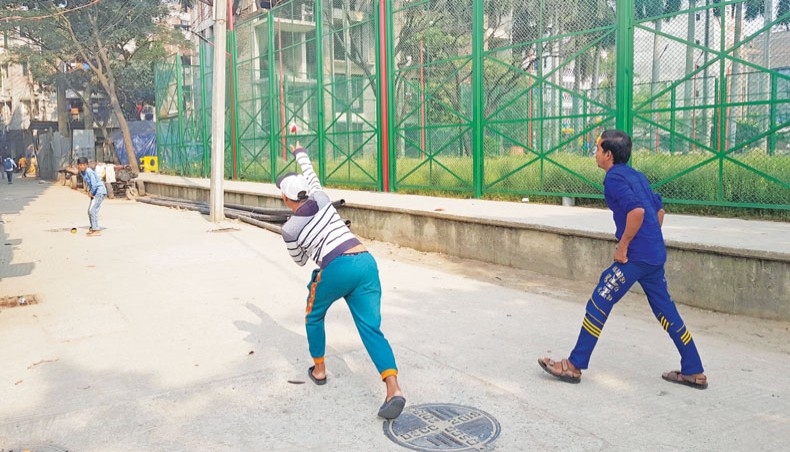 Children play cricket on a Hazaribagh road in Dhaka recently as a nearby playground has been kept closed for years. — Sourav Lasker

Public entry to city parks and playgrounds has remained restricted for over three years since the contractors had fenced them for renovation.

Dhaka south and north city corporations have meanwhile inaugurated 15 of the capital’s 74 parks and playgrounds after they were renovated.

But residents complained that even after the renovation was completed the authorities made the parks and playgrounds off limits to the public in the name of maintenance.

Dhaka north mayor Md Atiqul Islam said that due to the coronavirus outbreak the construction work had remained suspended for six months while five spaces had been grabbed by influential people.

He said that mobile courts evicted the grabbers and the construction work on them resumed in full swing.

‘At the end of December four parks and playgrounds will be opened to the public,’ he said.

Residents of Basabo and Khilgaon complained that the authorities did not allow them to enter Bir Muktijoddha Shaheed Alauddin Park, well known as the Tarun Sangha Math, and the Jorepukur Math after their renovation.

Dhaka South City Corporation officials said that for a better maintenance of the playgrounds they made them off limits to people as far as use was concerned but they did not restrict the grounds for anyone.

Till November the city corporation has inaugurated six parks and three playgrounds, including the playgrounds in Basabo and Khilgaon.

‘Overall, 71.03 per cent of the renovation work on the rest of the parks and playgrounds has been done,’ he said.

According to the DSCC estate department it has 26 parks and 12 playgrounds for its 10 million residents.

Jahangirnagar University urban planning professor and also general secretary of the Bangladesh Institute of Planners Adil Mohammad Khan said that the number of parks and playgrounds in the capital was highly inadequate.

But, he said, an unending renovation of parks and playgrounds has made the public space crisis acute.

According to the DNCC estate department, it has 26 parks and 10 playgrounds.

Urban planners also said that parks and playground were called health infrastructure of a city.

Residents said that the authorities were wasting time in completing the renovation process when they needed the open spaces more than ever for sound breathing in the time of COVID-19.

DNCC, under a project, took initiatives to renovate 22 open spaces in April 2018 and they were scheduled to be completed by March 2019, but only four of them were completed as of now.

Mohammadpur resident Al-Amin Talukder said that he, along with others, used to have morning walk at the Iqbal Road park but the city corporation has kept it closed for more than two years.

‘Now there is no space for our walk as the only park has been under renovation for nearly two years,’ he said.

He demanded that the authority completed the work soon.

City corporation officials said that due to the coronavirus outbreak the renovation work of the parks and playgrounds had remained halted for several months.

According to the DSCC estate department, the city has 26 parks and 12 playgrounds, all of which are in its old part.

DSCC started renovating 18 parks and 11 playgrounds in 2017 under the Jal Sabuje Dhaka project at a cost of Tk 200 crore.

Later the cost was revised up to Tk 243 crore and the project was rescheduled to be completed by June 2019.

The project cost was again increased, to Tk 343 crore, and the duration re-extended up to December 2019, which was again extended for two years.