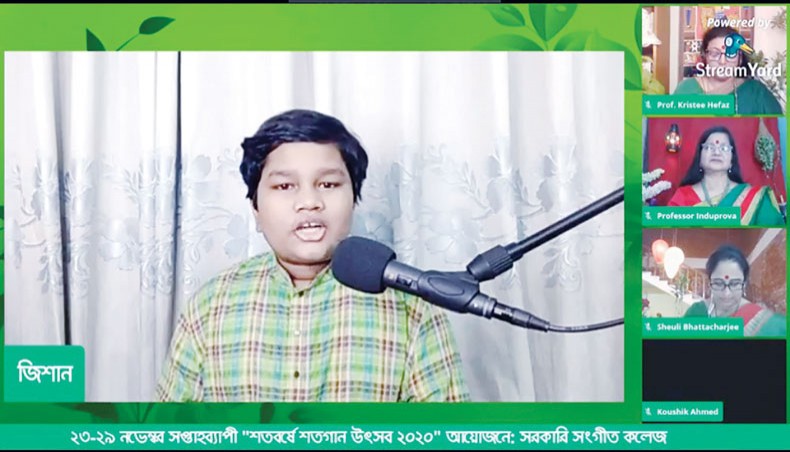 A child artiste performs a song about Mujib in an online music show organised by Government Music College marking the birth centenary of the country’s founding president Sheikh Mujibur Rahman on Thursday.

The event is featuring 100 songs about Mujib, discussion and others.

The festival, which commenced on Monday, is being streamed on the Facebook page of Government Music College at 6:30pm every day.

Sheuli Bhattacharjee, convener of the festival, delivered the welcome speech at the event, which was anchored by Kazi Momta Hena.

‘Government Music College is tirelessly working to promote our local music across the globe. We arranged this festival to pay tribute to Sheikh Mujibur Rahman.  This is the first online music festival arranged by Government Music College. We have received enormous response from music lovers. I invite all to enjoy the event on Facebook,’ said Kristi Hefaz.

On Thursday, thespian Ramendu Majumdar attended the programme as special guest and discussed on the life and works of Sheikh Mujibur Rahman.

On Friday, writer and professor Shourav Sikder attended the programme as discussant.

The festival will end on November 29.