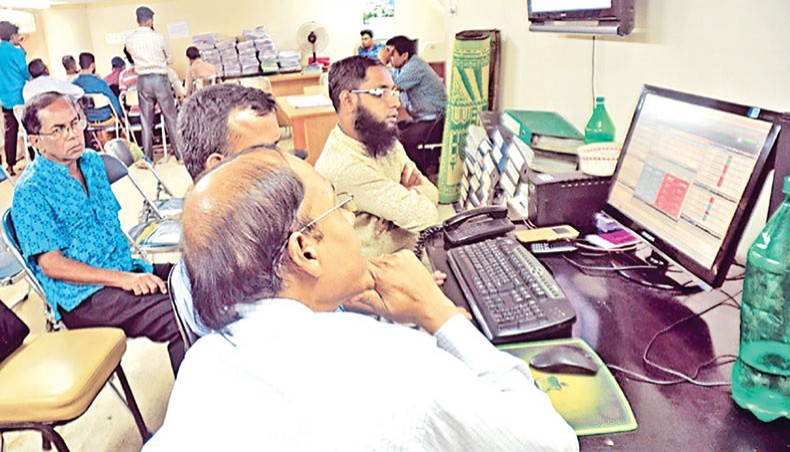 A file photo shows people monitoring share price movements on a computer screen at the Dhaka Stock Exchange in the capital. Sponsors of mutual funds have been on a selling spree amid a sharp surge in unit prices in recent days. — New Age photo

Sponsors of mutual funds have been on a selling spree amid a sharp surge in unit prices in recent days.

The declaration came between September 6 and November 16.

Unit prices of SEML FBSL Growth Fund soared to 14.3 each on November 15, but closed at Tk 10.6 on Thursday due to the sale declaration, market operators said.

Eastern Bank Limited, one of the sponsors of EBL NRB Mutual Fund, has announced to sell 3.48 crore units of the funds.

The bank has already completed sale of 1.74 crore units of the fund on the public market. It made the declaration in November 10-17.

Unit prices of EBL NRB Mutual Fund climbed to Tk 7.4 each on November 15, but closed at Tk 6.3 each on Thursday.

Eastern Bank Limited is also a sponsor of EBL First Mutual Fund and the bank has completed sales of 8.95 lakh units of the fund after making the declaration on November 10.

Unit prices of EBL1stMF jumped to Tk 8.3 each on November 16, but closed at Tk 7.3 on Thursday due to the sale declaration.

Bangladesh Finance and Investment Company Ltd, one of the Corporate Sponsors of Vanguard AML BD Finance Mutual Fund One, has sold one crore units of the fund on the block market.

Prices of VAMLBDMF shot to Tk 11 per unit on November 15, but closed at Tk 9.1 on Thursday.

They said that mutual funds had never seen such kind of rally on the market.

But now, 12 funds were traded above Tk 10 while another eight were traded near the face value as per the closing price on Thursday.

Mutual funds have been dominating the stock market amid huge participation from company investors.

More and more general investors are now flocking to mutual funds leading to an abnormal surge in unit prices of mutual funds.

Market operators said that unit prices of mutual funds started to surge after Bangladesh Securities and Exchange Commission chairman Shibli Rubayat-Ul-Islam said that mutual funds had a lot of potentials in the country and they had the ability to declare 10-18 per cent dividends at a recent event.

Lack of effective action by regulator against manipulators and rumour-mongers also contributed to the unusual hike in share prices on the stock market, the operators said.