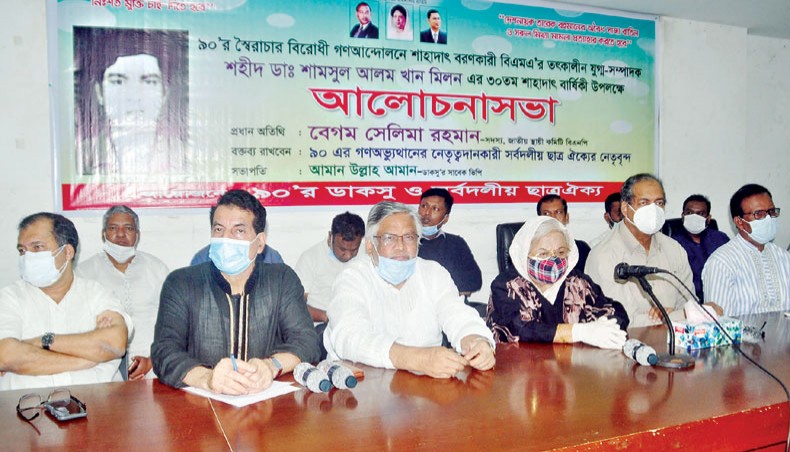 Members of the DUCSU and All Party Student Unity of 1990 hold a discussion at the National Press Club in Dhaka on Friday to commemorate the life and work of Dr Shamsul Alam Khan Milon on his 30th anniversary of death. — New Age photo

BNP senior leader Selima Rahman on Friday warned that the country might face a famine-like situation in the days to come due to the government’s ‘misrule and failures’.

‘Whenever Awami League comes to power, the country faces misrule and famine. Bangladesh now has got paralysed due to the misrule,’ she said.

Speaking at a discussion, the BNP leader said, ‘Famine is knocking on our door. Ordinary people are starving as the prices of essentials have skyrocketed while thousands of youths have become jobless. Even then, they are in peaceful sleep.’

Selima, a BNP standing committee member, slammed Awami League general secretary Obaidul Quaer for what she said regularly talking about BNP’s existence and its failure to wage a movement. ‘Why’re you so worried about the existence of BNP? You’ve no reason to be concerned about BNP. But the fact is that you’re sacred of Zia family.’

She also criticised the government for not taking effective steps to contain the outbreak of the coronavirus in Bangladesh at the early stage.

‘When panic gripped the entire world with the spread of the corona pandemic, they said they’re stronger than the virus. In reality, they pushed people towards death without taking preventive measures and ensuring the availability of tests.’

The BNP leader said corona-infected people died on the roads and ran from one hospital to another for lack of treatment facilities at the early stage of the virus outbreaks as the government has taken the pandemic as a means of ‘trade’ and making money through ‘corruption’. ‘The health ministry is now on the verge of collapse.’

Selima urged all to get united to save the country from ‘misrule’, famine and restore democracy through a movement.