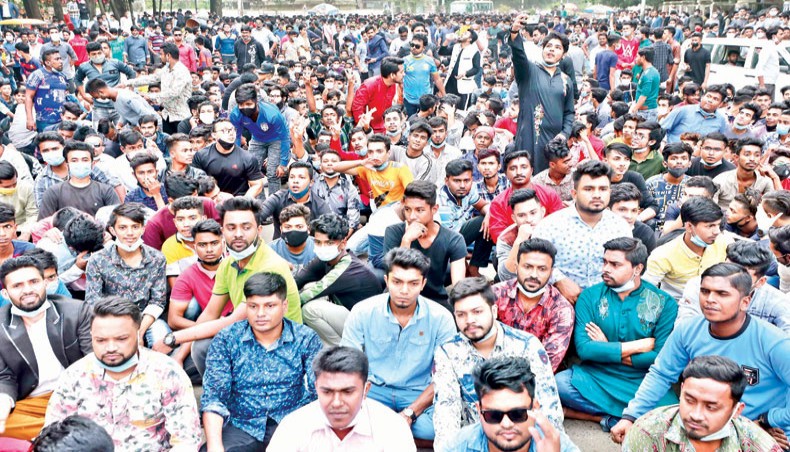 Without maintaining physical distance and wearing masks, Bangladesh Chhatra League leaders and activists take part in a rally at Raju Memorial in Dhaka University on Thursday to condemn the demand for the removal of a sculpture of Sheikh Mujibur Rahman. — New Age photo

The Bangladesh Chhatra League, student wing of the ruling Awami League, on Thursday rallied on the Dhaka University Campus condemning the opposition to the construction of the sculpture of the country’s founding president Sheikh Mujibur Rahman in the capital.

Warning people who are opposing the construction of Sheikh Mujib’s sculpture, BCL president Al-Nahean Khan Joy, said, ‘If we take to the streets, you will not have a chance to escape. We will give a strong answer if anyone shows the audacity to oppose it.’

He said that anyone opposing the move of construction of the sculpture would be thrown into the River Buriganga.

The BCL brought out a procession that started at Plassey at 3:30pm and ended in a rally at the base of the anti-terrorism Raju memorial sculpture near the TSC.

More than a thousand leaders and activists of different units of the BCL were present on the occasion.