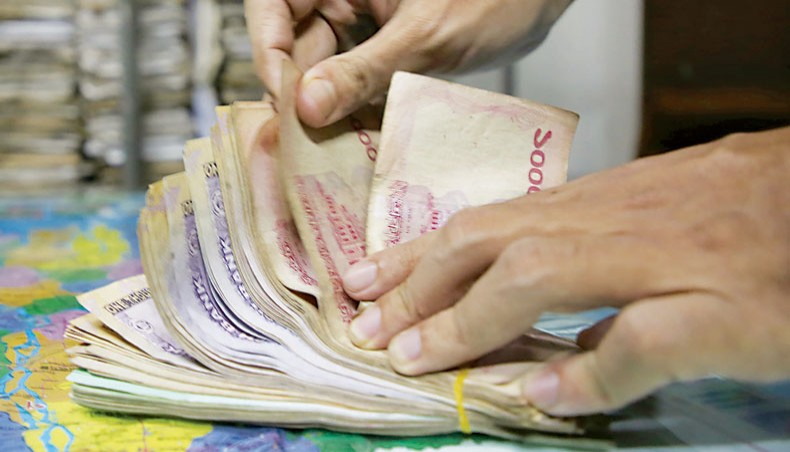 A file photo shows a man counting Tk 1,000 notes in the capital. Private sector credit growth plunged to 8.61 per cent in October due to lower credit demand as the country’s economic and business activities are yet to get momentum with the second wave of COVID-19 outbreak looming.— New Age photo

Private sector credit growth plunged to 8.61 per cent in October due to lower credit demand as the country’s economic and business activities are yet to get momentum with the second wave of COVID-19 outbreak looming.

Economists said that the investors as well as the bankers had remained concerned about how they would keep their existing business projects up and running.

Businesses are not thinking about any fresh business expansion plans amid the coronavirus outbreak, they said.

Though the government has projected an 8.2-per cent GDP growth for fiscal year 2020-21, the private sector credit growth in four months (July-October) was far lower than the requirement to support a V-shaped economic recovery.

The private sector credit growth deteriorated in October after improving a bit to 9.48 per cent in September from 8.2 per cent in March, according to the latest Bangladesh Bank data.

Former interim government adviser AB Mirza Azizul Islam told New Age, ‘The situation indicates that the businesses are not making investments, which is reflected in the fall in imports of industrial raw materials and capital machinery.’

Given the situation, it would be quite impossible to attain the projected GDP growth in FY21, he said, adding, ‘At best, it could be between 4-5 per cent.’

He also said that the employment situation would deteriorate in the coming days in the absence of adequate investments.

Cautiousness of the banks could be another reason for the private sector credit growth fall, he said.

The growth was 6.19 percentage points lower than the Bangladesh Bank’s target of 14.80 per cent for the current fiscal year.

Based on the private sector credit growth trend and the government’s GDP growth projections, Mansur said, ‘It would not be possible to achieve the growth target while the economic downward trend would linger.’

The employment creation would not be possible within the existing private sector investment situation, he said.

Officials of the central bank said that the credit to the private sector had increased in the first three months of the current fiscal year mainly because of the regulatory pressure over the banks in implementing stimulus packages.

‘Private sector credit growth would not increase much until March next year as our economy and businesses are yet to recover fully,’ said Mutual Trust Bank managing director Syed Mahbubur Rahman.

Private sector credit growth would hover at 9 per cent in the upcoming days, he said.

As of October, total outstanding loans to the private sector stood at Tk 11,14,322.40 crore, according to the BB data.