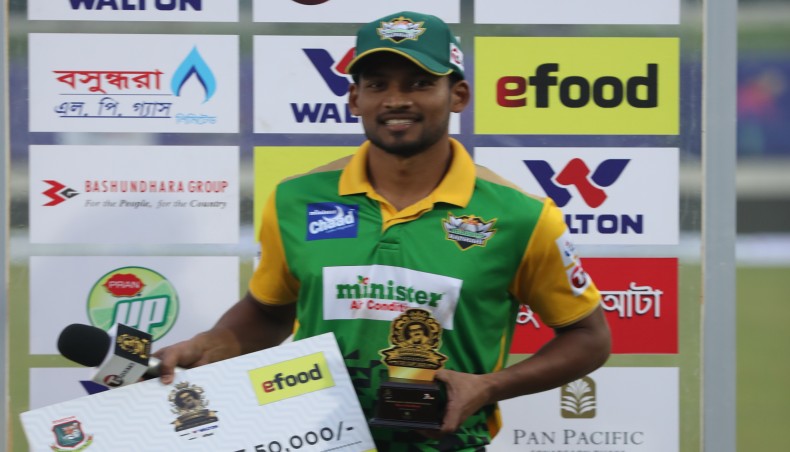 Minister Group Rajshahi captain Nazmul Hossain poses with the match of the match trophy after their win against Gemcon Khulna in their Bangabandhu Twenty20 match on Thursday. — BCB photo

Gazi Group Chattogram blew away Beximco Dhaka, beating them nine wickets and 55 balls in hand in their first match of the Bangabandhu Twenty20 Cup on Thursday.

Chattogram openers Soumya Sarkar and Liton Das made 44 off 29 balls not out and 34 off 33 balls respectively to take them to 90-1 in just 10.5 overs after four Chattogram bowlers took two wickets each to bowl out Dhaka for 88 in 16.2 overs.

Sent to bat, Dhaka opener Mohammad Naim was the only batter to show some promise, hitting a brisk 40 off 23 balls, while the batters lent no support.

After Naim perished as the fifth batsman in the ninth over off Mosaddek Hossain, Dhaka lost their remaining wickets for just 22 runs to be bundled out for an embarrassing total.

In reply, Soumya and Liton formed a 79-run opening stand, which Nasum Ahmed broke in the 10th over by dismissing the latter.

Nazmul hit 55 off 34 balls with six fours and three sixes guiding Rajshahi to 147-4 after Khulna were restricted to 146-6 at the Sher-e-Bangla National Stadium.

Fresh from his unbeaten 48, Ariful Haque struck 41 not out to rescue Khulna from precarious 51-5 halfway through the innings.

Ariful, who faced 31 balls and struck three sixes along with two boundaries, was aptly assisted by Under-19 World Cup winner Shamim Hossain (35 off 25 balls), as the duo shared 49 runs for the sixth wicket.

Khulna’s much-vaunted top-order batsmen failed to provide the kind of sparkle they were expected to after skipper Mahmudullah won the toss and elected to bat.

Anamul Haque (26), Imrul Kayes (0) , Mahmudullah (seven) were dismissed cheaply while Shakib Al Hasan, yet to find his form, was dismissed for 12. Mukidul Islam took 2-44 for Rajshahi. .

Chasing a modest target man-of-the-match Nazmul set the tempo with his blazing innings while Rony Talukder (26) and Mohammad Ashraful chipped in with decent innings to complete the win.