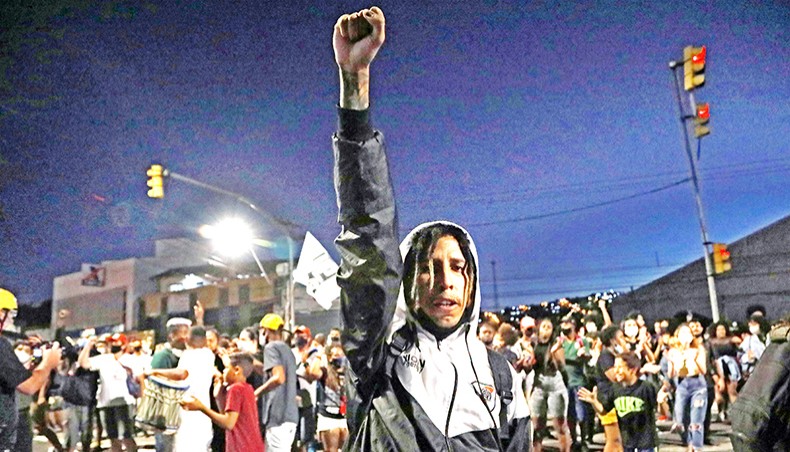 A black man raises his fist during a protest against the death of Joao Alberto Silveira Freitas in Porto Alegre, Brazil on Monday. — AFP photo

The UN said Tuesday the deadly beating of a black man by white guards in Brazil exemplified ‘structural racism’, and called for an independent investigation and urgent reforms in the country.

Several days of protest have erupted in Porto Alegre, southern Brazil, after video footage last week showed 40-year-old welder Joao Alberto Silveira Freitas being punched in the face and head by a supermarket security guard while another guard held him.

Ravina Shamdasani, a spokeswoman with the UN rights office, told reporters during a virtual briefing in Geneva that his killing was ‘an extreme but sadly all too common example of the violence suffered by Black people in Brazil.’

‘It offers a stark illustration of the persistent structural discrimination and racism people of African descent face,’ she said.

She said government officials had a responsibility to acknowledge the underlying problem of persisting racism as the first essential step towards solving it.

Brazilian President Jair Bolsonaro has downplayed structural racism in Brazil, where around 55 per cent of its population of 212 million identifies as black or mixed-race.

Bolsonaro has insisted he himself is ‘colour blind’, while his vice president Hamilton Mourao also caused an outcry Friday when he said ‘there is no racism’ in Brazil.

Shamdasani however insisted that ‘structural racism, discrimination and violence people of African descent face in Brazil is documented by official data.’

She pointed to statistics showing that ‘the number of Afro-Brazilian victims of homicide is disproportionately higher than other groups.

‘Black Brazilians endure structural and institutional racism, exclusion, marginalisation and violence, with, in many cases, lethal consequences,’ she said.

‘Afro-Brazilians are excluded and almost invisible from decision-making structures and institutions.’

Acknowledging that Brazil had opened an investigation into Freitas’s death, Shamdasani called for the probe to be ‘prompt, thorough, independent, impartial and transparent,’ and insisted it should ‘examine if racial bias played a role.’

The UN rights office, she said, was also urging Brazilian authorities to ‘investigate any allegations of unnecessary and disproportionate use of force against people protesting peacefully following Silveira Freitas’s death and hold those responsible to account.’

More broadly, she said, there was an urgent need for Brazil to reform its laws, institutions and policies to address ‘deeply engrained racial stereotypes.’