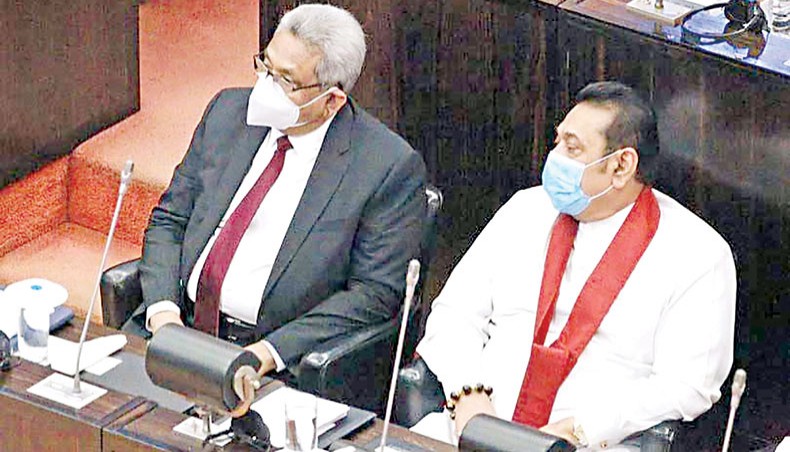 Sri Lanka’s president Gotabaya Rajapaksa and prime minister Mahinda Rajapaksa in the parliament during the debate of the second reading of the 2021 budget. — The Daily Mirror Online

THE budget debate taking place at this time is when the country has suffered a setback in its efforts to keep the COVID-19 pandemic at bay. There is increasing criticism being voiced especially in the social media and civil society at the government’s utilisation of the military at the expense of civilian leadership in meeting this health challenge. The increase in the military budget and the diminished health budget in the context of the enormous increase in the budget deficit is indicative of the government’s priorities. The military is playing an increased role in civilian affairs, not only leading the battle against the coronavirus but also in terms of administrative presence in the government bureaucracy, with retired military personnel being deployed to positions of leadership. This seems to reflect the president’s personal faith in the military forces he served both as a combat officer and later as defence secretary.

In his address to the nation a year after winning the presidential election, president Gotabaya Rajapaksa said, ‘After I came into power, I appointed suitable officials in charge of the security apparatus of the country and gave them the required authority to carry out their responsibilities without any compromise. The intelligence services that had collapsed in the past were restructured and revitalised. Accordingly, we have managed to control the possibility of a resurgence of extremism in any form. A very effective and robust programme has been implemented to control the drug menace. There is no room anymore to engage in drug trafficking or operate the underworld from inside of prison cells as in the past. People of this country no longer have reasons to live in fear of underworld gangs, extortionists and racketeers.’

The increasing criticism of the government in the social media which is outside of government control indicates disillusionment of sections of the intelligentsia who utilise the social media. There are criticisms from both extremes, which suggest that the government is not being sufficiently Sinhala Buddhist in its orientation to some sections while being too much identified with one community to the exclusion of those of other communities. President Gotabaya Rajapaksa has answered these criticisms in his recent address to the nation. He stated that ‘The best yardstick of the success or failure of mine is the public opinion and not the organised propaganda spread by political opponents on social media platforms.’ Anecdotal evidence suggests that the president’s popularity continues to be high at the community level in the Sinhala Buddhist heartland even though the increasingly scathing criticisms will be eroding that support base.

THIS past weekend while the budget was being debated in parliament there was a meeting on peacebuilding in Kandy organised by the Association of War Affected Women with the participation of civil society representatives and university academics. The main theme of the discussion was to assess the peace processes of the past and to generate ideas that would support a nationally-driven reconciliation process. One of the significant proposals to arise out of the meeting was for the participants to make a joint submission to the Expert Committee on Constitutional Reform appointed by the government. The importance of a new constitution in the post-war context is that it will define the powers of government at the national and sub-national levels which is important to mitigate the long standing conflicts and tensions between the different ethnic and religious communities.

During the breaks for lunch and tea at the meeting on peacebuilding in Kandy some of the participants discussed the situation in the surrounding villages with the hotel staff who said that their villages continued to support the government strongly. They said that the president was popular and their hope was strong that he would make a difference where other leaders had failed. They also spoke positively of the role of the military and especially of the army commander general Shavendra Silva and the leadership they saw him giving to the COVID-19 containment drive and the news briefings he gave. This positive impression of the role played by the military and the popular army commander may aid the government to make the military more representative of Sri Lanka’s ethnic and religious diversity by recruitment of more minorities.

On the way back to Colombo we stopped at a dilapidated roadside shop to buy fruit especially the pink jambola that is difficult to find in Colombo. While making our purchases we asked the shop owner what he thought of the current situation. He said that business was down as few passing vehicles stopped to buy anything as they used to in the past due to the COVID-19 threat. When I asked him what he thought of the government, he said that he had confidence in the president. The other politicians I specifically asked him about did not seem to command his confidence in the manner the president did. When I asked him about the role played by the military his face lit up and he said he believed in general Shavendra Silva. He said that if the previous government had been in power, there would be tens of thousands of COVID-19 deaths by now. These may not be factual statements but such statements indicate the state of mind of people at the present time.

Not wanting to lose this opportunity to tap into local knowledge, I asked my discussant whether he feared the white vans that abducted people in the past would make their reappearance. He did not seem to grasp the significance of the white van to those who showed political opposition to the government or to those who had become its victims. He said he had no such fears as the government was catching all the criminals and drug pushers and putting them into jail. He compared this to the situation under the previous government, and said that they had used the criminals and drug pushers to do their dirty work and let them roam about freely. This is anecdotal evidence of continuing strong support for the president’s policies and belief in his sincerity.

ONE of the positive features of the past year, since the election of president Rajapaksa, has been the reduction if not absence of any anti-minority riot and the diminished hate speech against minorities in the media. This has come as a relief to those who are ethnic and religious minorities even though the Muslim population continues to hurt severely due to the issue of enforced cremations of COVID-19 victims. Both the presidential and general elections were polarising ones in which primeval ethnic and religious fears were mobilised by the contesting politicians with backing from sections of civil society, professionals and the media. Interestingly those who were at the forefront of the ruling party’s nationalist campaign during the elections, which benefited both the president and the government, are now much less visible. Indeed they seem to be subdued and there are rumours that due to their disenchantment they may be considering new political alliances.

It is noteworthy that in his speeches president Gotabaya Rajapaksa has frequently iterated that he will ensure justice and equal treatment to all sections of the people while iterating the reality that his victory at the presidential election was due to the votes of the Sinhala Buddhist ethnic and religious majority. However, he has been taking pains to correct any adverse fallout of his statements that affirm that he is concerned and taking actions to support one set of communal interests at the expense of equity and fairplay to citizens. In his address to the nation last week the president said that ‘An administration that protects the rights of all citizens regardless of racial or religious differences will be established during my tenure.’ The issue of COVID-19 cremations is a test of more responsive governance, as the application of one law equally to those who are differently situated, in this case on religious convictions, is not equitable.

One of the key proposals made at the meeting in Kandy was to establish a Pluralism and Diversity Commission on the lines of the independent commissions that were established under the 17th and 19th Amendments to the constitution but with more powers to ensure that all communities and all religious were treated equitably so that they would not feel alienated. This was an idea that had been broached at a national inter-religious conference organised by the National Peace Council in 2018 at which a Pluralism Charter was developed and ratified by the participants. This charter was the outcome of three years of consultations with multi-religious and multi-ethnic communities mobilised through work at the ground level. It reflected the need for a shift in thinking to one in which equal rights, equal opportunities and equal protection become the norm for each and every citizen. This is a proposal that will be made to the Expert Committee on Constitutional Reform whose deadline is November 30.