As a peasant loves his land 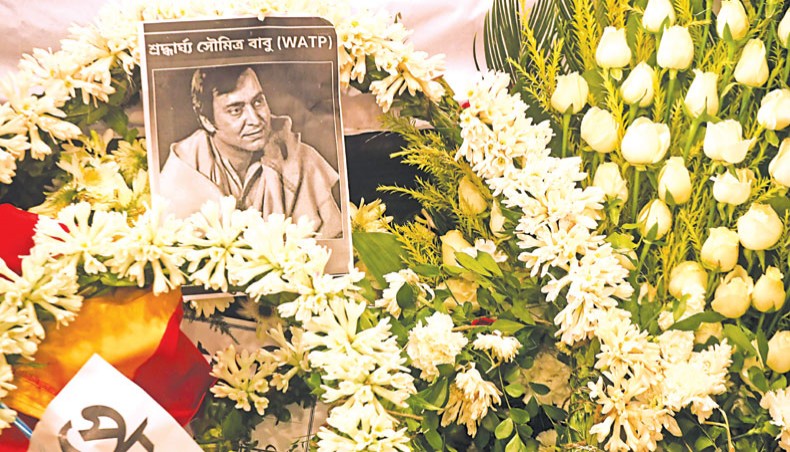 IN HER moving obituary to Soumitra Chatterjee last week, his avid fan and fellow movie actor Sharmila Tagore posed a question that could be asked of moviegoers in Pakistan and all non-Bengali Indians. How many in both countries were aware of the Bengali actor’s magic that was applauded the world over by movie professionals and dilettantes but seldom celebrated outside the Bengali milieu on any side of the border?

Chatterjee was 85 when he succumbed to the coronavirus at a Kolkata hospital on November 15, leaving behind a rich tapestry of memories from the world of movies, theatre and television. Sometimes called Satyajit Ray’s ‘one-man stock company’, having led the field of finely crafted characters in 14 memorable movies from the maestro’s repertoire, Chatterjee enthralled contemporary and avant-garde moviegoers with his controlled acting in complex roles.

In having a worldwide name as a class actor, Chatterjee was perhaps a step ahead of the towering Bombay movie legend Dilip Kumar, but they were similar in other ways. Dilip Kumar had turned down roles in Hollywood for reasons that were similar to Chatterjee’s refusal to be lured by Bombay’s tinsel town of Hindi movies. ‘Doing Bengali films is like a peasant tilling his own land. I have to be here. I cannot be anywhere else,’ he said. That was what one heard Dilip Kumar saying about his embrace of Mumbai.

Being in love with Bengal brought financial loss, and a yawning gap between his economic status and his social status as a cultural icon. ‘No matter how much people revere me, the harsh truth is at least 1,000 employees in Kolkata’s corporate sector earn much more than me. That is why I have to keep working.’

The late American-born Indian actor Tom Alter offered another handy insight into Dilip Kumar’s acting that would easily apply to Soumitra Chatterjee. Alter, fresh from acting school in Pune, asked Kumar — who would be 98 on December 11 — the secret of his good acting. ‘Sher o sukhan,’ Dilip Kumar replied cryptically but earnestly. What he meant was that his deep love of poetry and literature — which often comes in a package deal together with the art of conversation — enabled him to delve as deeply into a role as any character required of him.

Deep involvement with literature and the arts, packaged with a spontaneous ease of close observation and ability to strike up a conversation in heart-tugging Bengali held Soumitra da in good stead.

‘Perhaps no other actor in India was as lucky as me,’ he told Rediff.com about having worked with the greats like Satyajit Ray, Mrinal Sen and Tapan Sinha.

It did seem like he lived an actor’s dream, wrote author and journalist Sandip Roy in a tribute in The Scroll. A boy from Krishnanagar, working as an All India Radio announcer, he was rejected for Ray’s Aparajito (1956) because Ray felt he was too tall for the adolescent Apu. But Ray kept him in mind and reached out to him when he was making Apur Sansar (1959), the third part of the trilogy. That partnership lasted 14 films and won Chatterjee the Legion d’Honneur, France’s highest civilian award just like Ray.

The stories of Chatterjee’s diligence rivalled Dilip Kumar’s, a mandatory requirement for method actors. He once said: ‘Having worked with Ray I realised how difficult it is to become great.’ At the age of 27, at Ray’s behest he changed his handwriting for Charulata because his style was deemed too modern, a rounded style that arrived on the cultural scene post-Tagore. He learned to play the piano for just one song.

While the trio of Dilip Kumar, Raj Kapoor and Dev Anand dominated the Bombay cinema for decades, Bengali movie audiences were torn between Chatterjee and Uttam Kumar.

Chatterjee once said: ‘If Uttam Kumar committed a crime and then he gave that smile, I was ready to believe he was innocent.’ But he also said: ‘The fact that he wouldn’t even consider a different hairstyle for the sake of acting was disappointing.’

Unlike ‘stars’, Soumitra Chatterjee did not keep buttoning his collar, donning a wig and playing romantic heroes opposite women one-third his age, wrote Roy. When Ray’s son Sandip revealed he was planning to make with a different actor a Feluda detective film, sequel to the cult character portrayed by Chatterjee, the thespian reportedly laughed: ‘This is a very wise decision. I am no more a Feluda. I am a Felu uncle now.’

The mourners who walked in their thousands holding flowers and candles on Chatterjee’s last journey through the maze of Kolkata streets, once relished his off-screen persona too, which was as absorbing and purposeful as the movies he made. In his daily life, Chatterjee carried and displayed the essence of Bengal’s cultural and political renaissance.

‘I am surprised that the man who was in power in Gujarat during the horrific riots of 2002 is now the man on the throne of India. Perhaps people can’t see a powerful alternative. Or they are unable to understand the toxic nature of this politics,’ he told an interviewer shortly after the advent of prime minister Modi in 2014. Chatterjee was speaking in an unmistakably partisan tone, using words that are not the staple of movie actors of late, barring notable exceptions. Indian film industry is seeing signs of McCarthyism in the political climate.

Mughal emperors may have discouraged beef-eating as hurtful to Hindus. Chatterjee refused to be generous. ‘I can’t express in words the anger I feel when I see the drama about eating beef… People around the world eat beef. Most important, who is anyone to decide what others can and cannot eat?’ Chatterjee’s legacy is of a piece with his rich Bengali cultural heritage, and it looks primed to defeat the looming illiberal storm threatening to uproot it.