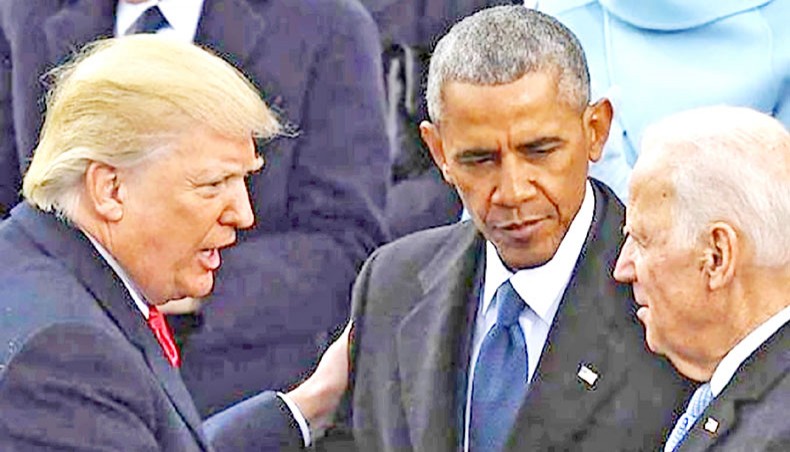 A NEW term has imposed itself on the conversation regarding the impending presidency of US president-elect Joe Biden: ‘The Total Reset’. Many headlines have already promised that the Biden Presidency is ready to ‘reset’ US foreign policy across the globe, as if the matter is dependent solely on an American desire and decision.

While a ‘total reset’ is, perhaps, possible in some aspects of US policies — for example, a reversal of the Donald Trump Administration’s decision to abandon the Paris Agreement on climate change — it is highly unlikely that the US can simply reclaim its position in many other geopolitical battles around the globe.

President Trump was often accused of leading an ‘isolationist’ foreign policy, a misleading term that, according to Stephen Wertheim’s Tomorrow, the World: The Birth of US Global Supremacy, was deliberately coined to silence those who dared challenge the advocates of military adventurism and interventionism in the first half of the twentieth century.

Trump was hardly an ‘isolationist’ in that sense, for he merely invested more in economic warfare than firepower. However, traditional US foreign policy makers felt that an American ‘retreat’ from crucial geopolitical fights, especially in the Middle East, has undermined US influence and emboldened regional and international contenders to fill in the political vacancy resulting from that alleged retreat.

Even if that were true and that a Biden Administration is keen on reclaiming the US position in the Middle East and within the North Atlantic Treaty Organisation, such a task will not be easy.

It is convenient to assume that US foreign policy is entirely dictated by a single administration. While, indeed, each American president is often affiliated with a particular ‘doctrine’ that serves the purpose of defining him and his presidency, the truth, backed by historical facts, is rather different.

For example, president George W Bush launched a war on Iraq in 2003, which associated him with the ‘preemptive war’ doctrine. Yet, it was also Bush who ordered the final ‘military surge’ in Iraq as a prelude to a subsequent withdrawal, a process that continued during Barack Obama’s two terms in office and, again, under Trump. In other words, US behavior in Iraq followed a blueprint that, despite the seemingly contradicting rhetoric, was adhered to by different administrations.

In 2012, Obama declared his own version of the ‘total reset’ by announcing the ‘Pivot to Asia’ plan. This seismic move was meant to illustrate a growing belief that America’s real geopolitical challenge lies in the Pacific region, not in the Middle East. Obama’s ‘doctrine’ at the time was, itself, an outcome of burgeoning discourse championed by US foreign policy think-tanks with allegiances to both Democratic and Republican policymakers.

While Trump is often ridiculed for his over-emphasis on China as America’s greatest threat, Obama, too, made the trade war with China a centerpiece in his foreign policy agenda, especially during his second term at the White House. Obama’s frequent visits to Asia and many decisive speeches at the Asia-Pacific Economic Cooperation conferences were largely meant to solidify an American-led Asia-Pacific alliance with the single aim of torpedoing China’s perceived military and economic expansionism in the region.

Trump’s economic war on China was, undoubtedly, an American escalation which translated growing frustration among Washington’s elites into practical steps, however hasty and, at times, self-defeating. Still, the anti-China policy was hardly the brainchild of President Trump or his administration.

With that in mind, one wonders how would Biden be able to achieve a ‘total reset’ when US foreign policy is but the total aggregation of previous policies under past administrations? Even if one is to assume that Biden intends to author a whole new doctrine independent from those of his predecessors, such a task is still too daunting.

Indeed, the world is vastly changing, leaving the US with the opportunity to merely renegotiate its positions as a central global power — but, certainly not as the world’s only hegemon.

Just look at the Middle East region of the last few years to appreciate the US dichotomy. What started as a political feud between Turkey and Russia in Syria and almost escalated into an all-out military confrontation, eventually subsided, bringing Ankara and Moscow closer together.

While Turkey has, for years, charted a whole new political course, cautiously walking away from the declining NATO alliance, while looking to create its own zones of influence in Syria, Libya, Eastern Mediterranean and, finally, in the New Caucasus region, Russia too was asserting itself as a global power in these same regions and beyond.

Certainly, Turkey and Russia still stand at different ends of the spectrum regarding various geopolitical conflicts. However, they have learned that they must coordinate to fill the vacuum created by the US-NATO absence. Their cooperation has, indeed, already delivered concrete results and allowed both countries to claim victories by relatively stabilizing the situation in Syria, largely marginalizing NATO in Libya and, finally, achieving a ceasefire in the war between Azerbaijan and Armenia over Nagorno Karabakh.

If Biden is to reinsert the US back into these conflicts, his administration will find itself in the position of fighting on multiple fronts, against friends and foes alike.

While it is too early to determine the nature of Biden’s foreign policy doctrine, it behooves the new administration to alter its perception of itself and the world at large, and to understand that sheer military power is no longer a guarantor of political and economic influence.

Instead of advancing such wishful thinking as a ‘total reset’, it is far more practical and beneficial to consider an alternative that is predicated on dialogue and a multilateral approach to political and economic conflicts.

DissidentVoice.org, November 21. Ramzy Baroud is a journalist and the editor of the Palestine Chronicle. Baroud is a non-resident senior research fellow at the Centre for Islam and Global Affairs, Istanbul Zaim University.