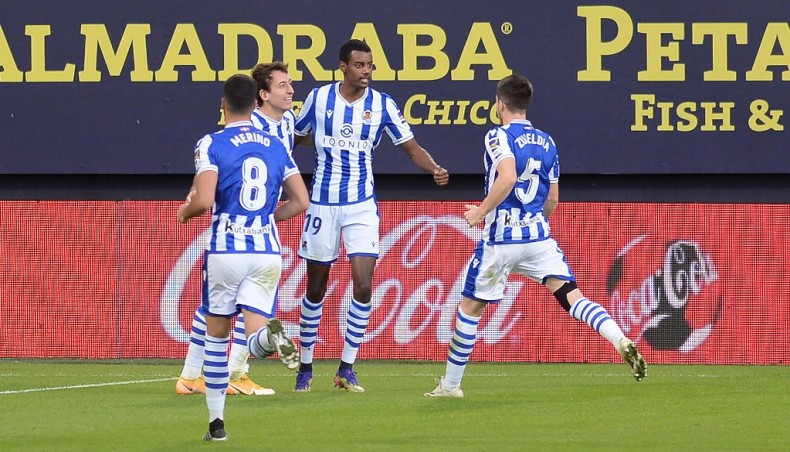 Real Sociedad's Swedish forward Alexander Isak (C) celebrates with team-mates after scoring a goal during their La Liga match against Cadiz at the Ramon de Carranza stadium in Cadiz on Sunday. — AFP photo

Real Sociedad coach Imanol Alguacil insisted the table means nothing, despite his team moving three points clear at the top of La Liga after beating Cadiz 1-0 on Sunday.

An excellent start to the season shows no sign of abating, with Imanol's side now three points clear of second-placed Atletico Madrid, albeit having played two games more.

They have scored an impressive 21 goals from their opening 10 matches, the highest tally in the league, and conceded only four.

‘I certainly won't be getting vertigo because I don't think about winning six games in a row, I think about the next one,’ said Imanol.

‘The statistics suggest the team is doing well but it's not enough. We want to achieve something great so we have to keep going.

‘It's useless to be top after 10 games, even more so with teams having games in hand. The table doesn't tell me anything.’

Isak enjoyed a brilliant season last term but has struggled for goals in recent months, this only his second in 11 appearances since the start of the campaign.

‘It's normal for a forward to want to score, especially when they have chances,’ added Imanol. ‘I told him the important thing is to have chances, that the goals would come, and so it proved today.’

After travelling to AZ Alkmaar in the Europa League on Thursday, Real Sociedad play at home to Villarreal, who sit third and are the league's other surprise high-fliers.

Defeat means Cadiz sit fifth, just above Sevilla after a strong start for the newly-promoted side.

Getafe were earlier held to a goalless draw by Eibar while Valencia had to come from two goals down to draw away 2-2 at Alaves.

Valencia are eighth and Alaves sit in 14th place.