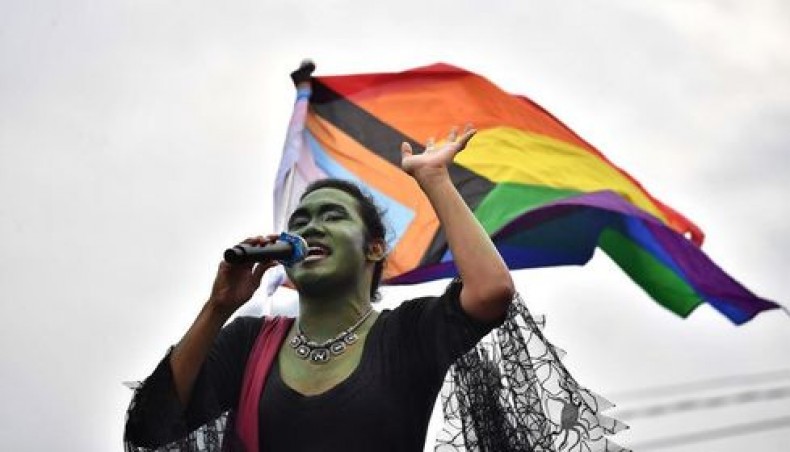 It takes Siraphob Attohi three hours to transform from a harried student into his drag queen persona Masala Bold – a wisecracking MC, who raises calls for gender equality during Thailand’s protests for democratic reforms.

A regular at Bangkok’s student-led rallies, Masala Bold’s glamorous presence and ribald jokes provide a teasing interlude between speeches from protest leaders demanding the resignation of Thailand’s prime minister and reforms to the monarchy.

But far from being simply an entertainer, theatre student Siraphob — who goes by the nickname Raptor and identifies as male offstage — said that the movement’s goals align with the LGBTQ community’s desire for gender equality.

‘If we can’t get real democracy in Thailand, then the rights for the LGBTQ community wouldn’t exist either,’ he tells AFP, adding, ‘So it’s my pleasure and my honour to use my theatre skills to be an activist and to help people, but actually it’s all about my future too.’

The 21-year-old and other prominent LGBTQ personalities have played a very visible role in the youth-led movement since it kicked off in July.

In demonstrations where the vibe could turn from festive to tense in just a matter of minutes, they had stood alongside black-clad protesters, dressed in eye-catching outfits and unfurling massive rainbow flags.

The protesters’ key demands were for royal reforms, a rewrite of a military-scripted constitution and for the resignation of army chief-turned-prime minister Prayut Chan-O-Cha.

But embedded in these core goals lies a clear path to marriage and gender equality in Thailand, said Angele Anang, a prominent transgender drag queen and the winner of popular reality show Drag Race Thailand.

‘We don’t have the same rights,’ she said, adding that the community’s greatest goal was for same-sex marriage to be legalised in Thailand.

‘It is the key to unlocking inequality,’ she added.

Thailand’s vibrant and diverse LGBTQ community — visible in media and in Bangkok’s famed nightlife — had helped the kingdom foster a reputation of tolerance.

But the reality was far less rosy.

Discrimination was rife for transgender people, who often found themselves missing out on job opportunities, and gay and lesbian stereotypes proliferate on television variety shows and films.

‘We’re branded and stereotyped – it is not true acceptance,’ said Raptor, as he got ready for a protest doubling as a gay pride parade.

As Raptor painted his skin green, he told AFP that this time Masala Bold will dress as Elphaba from ‘Wicked’ – the hit Broadway musical retelling the ‘Wizard of Oz’ from the witch’s perspective.

The choice was pointedly political – Raptor explained that green-skinned Elphaba was ostracised growing up, and later exiled from Oz when she went up against the powerful wizard.

‘It’s the same situation as Thailand,’ he said, referring to how pro-democracy activists had in the past fled to Europe to seek asylum for criticising the powerful monarchy.

Reforming the monarchy was the most ambitious and shocking demand from the pro-democracy movement.

A taboo subject in Thailand, the king was traditionally regarded as a demi-god and his influence permeated every aspect of society.

The students’ calls for change include the abolition of a draconian royal defamation law — which shields him from criticism — and for King Maha Vajiralongkorn to ‘stay out’ of Thailand’s turbulent politics.

‘Reforming the monarchy means we get rid of the different classes and aristocratic hierarchy, so everybody — including the LGBTQ community — will be equal,’ says transgender activist Sitthinon ‘Faison’ Songsiri.

A graduate from Thammasat University — one of Thailand’s most liberal schools and a bastion of activism — the 25-year-old said that her role as an emcee in demonstrations had empowered her.

‘We are the new taste of Thai politics,’ she said.

The kingdom’s protest-filled recent history is replete with rally leaders delivering ‘uncompromising’ speeches, she said, which leads to opposition groups blaming them for instigating violence.

But ‘we make the rallies lighter, funnier and less stressful,’ Faison said, adding, ‘At the same time, we make society more accepting towards our community.’

While Faison faced a raft of charges — including sedition — for participating in the protests, she was determined to continue to be a visible face.

‘We need the people to look beyond our make-up, wigs and dresses, and listen to what we want to say regarding the same-sex marriage and gender equality,’ she told AFP, adding, ‘If we fight together, the chances of succeeding in our cause is faster and better.’