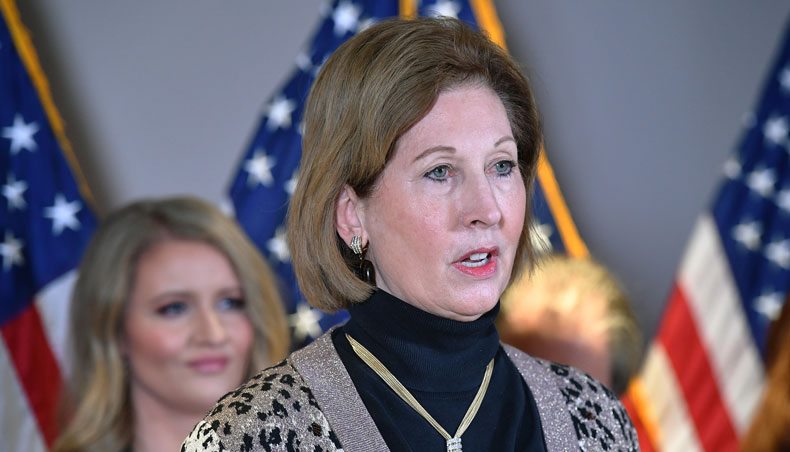 Donald Trump’s campaign announced on Sunday it was no longer working with a member of the president’s legal team who was widely mocked for alleging baseless conspiracy theories related to the November 3 election.

‘Sidney Powell is practicing law on her own. She is not a member of the Trump legal team,’ the president’s personal lawyer Rudy Giuliani said in a statement.

‘She is also not a lawyer for the president in his personal capacity,’ he added.

Trump had tweeted on November 14 that Powell would be a member of his legal team, alongside Giuliani and campaign legal adviser Jenna Ellis.

The team had sought to overturn election results in several states, including key battlegrounds Pennsylvania and Michigan, all of which voted for Democratic president-elect Joe Biden.

Giuliani’s announcement about Powell came just days after an extraordinary 90-minute press conference at the Republican National Committee in Washington, during which legal team members argued — without evidence — that a broad ‘national conspiracy’ to deny Trump re-election was underway.

Powell notably claimed that Trump had beaten Biden in a landslide, despite the fact that Biden won 306 Electoral College votes — 36 more than needed to win the White House — to Trump’s 232.

Biden was set to win the popular vote by more than six million votes.

Powell also claimed during the press conference that Cuba, Venezuela and other ‘Communist’ nations might have been linked to a hacking of the election that took millions of votes from Trump.

Prior to working with Trump’s legal team, Powell had defended the president’s former aide Michael Flynn, who was accused of lying about his Russia contacts during the 2016 presidential election.

Powell’s dismissal came the day after a Pennsylvania judge threw out Trump’s claims in the state in a scathing judgment.

Judge Matthew Brann wrote that the president’s team had presented ‘strained legal arguments without merit and speculative accusations’ in their complaints about mail-in ballots in Pennsylvania.