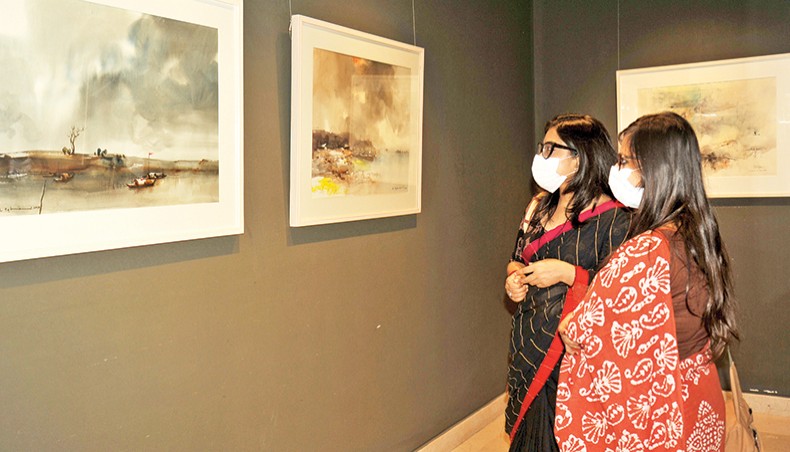 Acclaimed and young artists are displaying watercolour paintings at a group art exhibition under way at Edge Gallery in the capital’s Gulshan area.

Artists created the paintings during the government declared general holiday to contain the spread of COVID-19.

One can immerse oneself in the beauty of the painters’ masterly brushstrokes as they bring to life memories of places and idolise the beauty of rural and riverine Bangladesh.

To mention a few works, renowned artist Biren Shome’s painting titled ‘Panam Nagar-1’ shows a narrow road of Panam Nagar located at Sonargaon in Narayanganj district where a man on a motorbike is seen amidst dilapidated buildings which represents the tradition of the historic city.

Acclaimed sculptor and artist Hamiduzzaman Khan’s painting titled ‘Moonlit’ shows a full moon over a river veiled in fog while moonlight bathes the entire scene. Depicting some boats moored on the bank of the river, the work homes in on the beauty of rural Bengal during winter.

Artist Jamal Ahmed’s work titled ‘First Sight’ shows a home-bound woman clad in a sari carrying a pitcher against a seascape in which waves are crashing on the beach.

Young artist Mong Mong Sho’s work titled ‘Songs of COVID-19’ shows a fishing trawler moored on the bank of the river next to a hill. Suffused with greenery, the scene is as beautiful as any tourist spot in the hilly districts of Bangladesh.

Young artist Monjur Rashid’s painting titled ‘Messages from Nature-1’ shows a pigeon flying over an envelope while on the top-left side of the work a moon shines.

Young artist Palash Dutta’s work titled ‘Rickshaw-2’ shows rickshaw-pullers going with or without passengers while some people are waiting for rickshaws on roads.

The exhibition will remain open till December 15.