‘Home of Cricket’ comes back to life 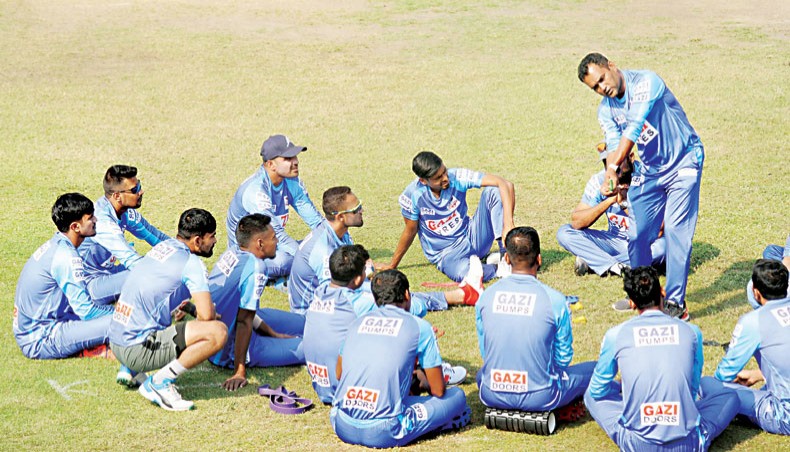 Sher-e-Bangla National Stadium in Mirpur, commonly known as the ‘Home of Cricket’ for Bangladesh is gradually coming back to life after a long enforced sabbatical with the Bangabandhu Twenty20 Cup knocking at its door.

The small rectangular strip of land beside the Bangladesh Cricket Board’s academy has now become the training ground for all five teams of the upcoming tournament and the sweet sound of bats hitting balls is making the early winter morning livelier.

BCB President’s Cup in October marked the return of on-field cricket in a bio-secure environment but only a limited number of cricketers got to participate.

In Bangabandhu Twenty20 Cup a total of 80 cricketers divided into five teams will take part in a near one-month long tournament, which is set to begin on Tuesday.

Gemcon Khulna secured the service of two ‘A’ category players, Shakib Al Hasan and Mahmudullah, from the players’ draft and have other seasoned campaigners like Imrul Kayes, Jahurul Islam, which makes them a strong contender for the title, felt Khulna opener Anamul Haque.

‘Even to us, our team is favourite. The way we have bonded as a team, gelled as a unit irrespective of seniors and juniors, I think that’s the main reason behind our team spirit. Therefore we too have high hopes,’ Anamul told the reporters on Sunday.

‘The team has players Shakib, Imrul, Riyad [Mahmudullah], which is a great joy and it’s always delightful to be in the same team with them. It’s always a pleasure to be with them and learn from them,’ he added.

Minister Group Rajshahi began the day with bad news as their first pick from the players’ draft Mohammad Saifuddin twisted his ankle while playing football during warm up in the morning and left the field on crutches.

Mohammad Ashraful, who is playing for Rajshahi and eyeing an international return through this T20 tournament, witnessed the incident firsthand.

‘He hurt himself while playing football. I saw that he fell down. Maybe he hurt his ankle.’

‘During training suffered an ankle injury. He is now under the observation of team physio and BCB medical team. Treatment is going on under medical protocol of BCB. Physio will give further updates of his progress tomorrow [today],’ Hannan said.

Fortune Barishal players were the only ones to train without wearing their team’s practice jerseys as they hadn’t arrived yet, informed their skipper Tamim Iqbal and pacer Abu Jayed.

Barishal is the only team in this tournament to stage a lavish logo unveiling ceremony, record a theme song and even rope in a film star as its brand ambassador but it failed to manage practice jerseys even two days before the first game.

Gazi Group Chattogram batsman Mahmudul Hasan Joy was the only player to detect positive for COViD-19 in the pre-tournament testing.

Mahmudul was part of the Under-19 World Cup winning side and impressed in the BCB President’s Cup but his Chattogram team-mate Soumya Sarkar downplayed the effects of his absence.

‘If the news [of Mahmudul’s COVID-19 infection] had come out after we began the training, then it would have been a different scenario. But as we have already begun without him, we have sorted everything that way.’