9 Iraqis dead in IS ambush 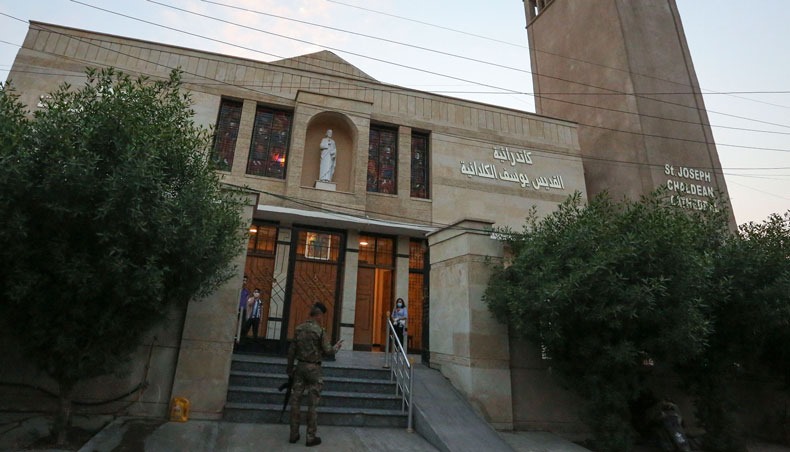 A member of security forces stands guard at the entrance of the Chaldean Church of St Joseph in the Iraqi capital Baghdad, on November 7, 2020. — AFP photo

Six Iraqi security personnel and three civilians were killed in an ambush Saturday carried out by the Islamic State group north of Baghdad, police and a local official said.

A police source said a roadside bomb hit a car and that jihadists opened fire on a rescue team of policemen and state-aligned paramilitary forces when they arrived at the scene, about 200 kilometres from the capital.

Four members of the Hashed al-Shaabi and two policemen died along with three civilians, Mohammed Zidane, the mayor of Zouiya, 50 kilometres from the city of Tikrit, said.

He updated an earlier civilian death toll of two.

There was no immediate word on casualties among the assailants, but Zidane said those killed among the Hashed, a coalition of mainly Shiite forces, were Sunni tribesmen.

Both the mayor and police said the ambush was the work of Islamic State jihadists, although no immediate claim of responsibility was issued.

Eleven people were killed on November 8 in an IS attack on a lookout post at Al-Radwaniyah, near Baghdad airport on the outskirts of the capital.

IS swept across a third of Iraq in 2014, seizing major cities across the north and west and reaching the suburbs of the capital.

After a fierce three-year fight backed by a US-led military coalition, Iraq declared IS defeated in late 2017.

The coalition has significantly drawn down its troops this year.

IS’ sleeper cells have continued to wage hit-and-run attacks on security forces and state infrastructure, particularly in desert areas where troops are stretched thin.

Attacks with high tolls and close to the capital have been rare, however.

The latest attacks come as the United States announced that it will withdraw another 500 troops, reducing its deployment to 2,500 soldiers.

Most other countries’ contributing forces to the coalition have pulled out since the coronavirus pandemic hit.

However, the Iraqi government has ‘clearly indicated it wants to maintain its partnership with the United States and coalition forces as we continue to finish the fight against ISIS’, the US Middle East commander said Thursday, using another acronym for the jihadist group.

General Kenneth McKenzie cited estimates that IS still has a body of 10,000 supporters in the Iraq-Syria region and remains a real threat.

‘The progress of the Iraqi Security Forces has allowed the United States to reduce force posture in Iraq,’ he said.

But US and coalition forces have to remain to help prevent IS from reconstituting as a cohesive group able to plot major attacks, he said.